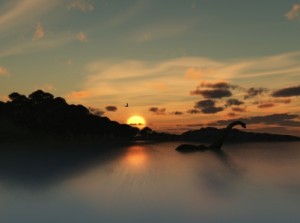 H. P. Lovecraft died before the age of flying saucers and Bigfoot. But I think he would have really enjoyed it. The expression these days for such creatures that dwell on the cusp of reality is “cryptid”. Do such beasts actually exist outside the bounds of scientific knowledge? I have no idea. Or are they really denizens of the Cthulhu Mythos? I’m pretty sure they aren’t, but it is fun to speculate.

A little history, first. Let’s start with Yetis. The idea caught on in 1921, after the Royal Geographical Society’s Everest Expedition led by Charles Howard-Bury. In his account of the trip, he mentions Yeti “footprints” he saw. The idea of mountain-dwelling ape-men was taken up almost immediately by the English writer, E.F. Benson, who changed the location to the Alps for his horror story, “The Horror-Horn” (Munsey’s Magazine, November 1922). HPL read this story and mentions it in “The Supernatural Horror in Literature” (1927):

Mr. Benson’s volume, Visible and Invisible, contains several stories of singular power; notably “Negotiam Perambulans,” whose unfolding reveals an abnormal monster from an ancient ecclesiastical panel which performs an act of miraculous vengeance in a lonely village on the Cornish coast, and “The Horror-Horn,” through which lopes a terrible half-human survival dwelling on unvisited Alpine peaks.

These details found their way into Lovecraft’s “The Whisperer in Darkness” (1930) when he says:

For one thing, we virtually decided that these morbidities and the hellish Himalayan Mi-Go were one and the same order of incarnated nightmare. There was also absorbing zoological conjectures, which I would have referred to Professor Dexter in my own college but for Akeley’s imperative command to tell no one of the matter before us. If I seem to disobey that command now, it is only because I think that at this stage a warning about those farther Vermont hills – and about those Himalayan peaks which bold explorers are more and more determined to ascend – is more conducive to public safety than silence would be. One specific thing we were leading up to was a deciphering of the hieroglyphics on that infamous black stone – a deciphering which might well place us in possession of secrets deeper and more dizzying than any formerly known to man.

So, the Mi-Go are, in fact, Yetis, though misunderstood.

The next cryptid to make a splash was Nessie. Like the Yeti, the local legends had been around for centuries, but the Scottish lake monster was all the rage after a photo appeared in 1933. Now called the “Surgeon’s Photo”, it put Nessie on the map and did much for Scottish tourism. The photo has since been revealed as a fake. On his deathbed, Christian Spurling, one of the men who perpetrated the hoax, confessed that Nessie was actually a toy submarine and putty. But, for sixty-plus years, this image appeared in newspapers, magazines, books, on TV shows as a fact (or at least a possible one.) But did it influence HPL, who would die four years later? Despite his penchant for aquatic monsters, I don’t believe he ever made reference to it. (Colin Wilson is another matter, entirely.) 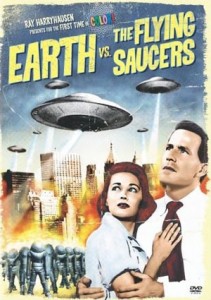 UFOs were brought into sharper focus on June 24, 1947, when an American newspaper man, Kenneth Arnold, coined the phrase “flying saucer”. Whether you call them that or Foo Fighters, they came into vogue after Lovecraft’s death. The man who actually promoted the idea of flying saucers was a Pulpster like HPL, Ray Palmer, the editor of Amazing Stories from 1938 through 1949. During his tenure, he published the controversial “Shaver” mysteries that claimed beings from the interior of the Earth were controlling human history. Even after leaving that publication, he continued to produce magazines about UFOs until 1958. We can only guess what HPL’s reaction would have been about UFOs, though I’m inclined to think he would have been more scientific than Palmer and ruled them out as bad science. (We can only wonder what he would have thought of such SF quirks as Scientology or the Dean Drive.) His good friend, Frank Belknap Long, wrote a story, called “The Mississippi Saucer”, in Weird Tales, March 1951. Perhaps HPL would have written similar tales?

The challenge for any writer using cryptids in a Mythos story are twofold:

1) How do you use them to enhance the horror? When most people think such creatures ridiculous, you are taking a chance using them. Will they destroy your “willing-suspension-of –disbelief”? Is it worth the risk?

2) How can such small monsters be of any interest when you have world destroyers the size of Cthulhu? What is Bigfoot compared to the Great Old Ones?

I think the answer to these two problems can be found in the works of HPL and others, such as Clark Ashton Smith. Lovecraft uses only a mere smattering of Benson’s “The Horror-Horn” idea to say that the Fungi from Yuggoth were mistaken for Yeti. He doesn’t try to make his Mi-Go Yeti-esque. He is willing to use the idea to prop up his own ideas but little else.

Clark Ashton Smith, in his Hyperborean tale “The Seven Geases” (which is considered a Mythos story by most critics including E. P. Berglund), features a sasquatch-like race called the “Voormis”. A wily Mythos writer could throw these creatures into a story and tie in all sorts of Bigfoot and sasquatchery for colour and effect, while still staying within the Mythos boundaries. It comes down to how creative you can get. Is Nessie really a Lloigor? Is Ogopogo really a Cthonian? Are flying saucers Mi-Go space-travel vehicles from Pluto?

Once you have passed from the idea that your monster is not actually an ape running about the woods in British Columbia, you still have to make them scary, using all the usual tricks of horror writing. Rick Hautala did this in The Mountain King (1996) and, more recently, Eric S. Brown in his popular Bigfoot War series (2010-2012). Though not Mythos, these novels demonstrate that there is still some horror left in these creatures that are all-too-often considered jokes. Cryptids are creepy when handled with a bit of logic, good description, and lots of teeth.