Henry Kuttner has come back into the public eye with The Last Mimsey (2007), a science fiction film about children who receive educational toys from the future. The film is based on Kuttner’s undeniably classic short story, “Mimsey Were the Borogoves” (Astounding, February 1943). It is one of the stories that guarantees him a spot on SF’s Greatest Writers list. There were others, but Kuttner did not find his way onto the grandmaster roll easily. First, he had to change his reputation, a reputation sullied in part by the Cthulhu Mythos.

We don’t often think of snobbery as being part of science fiction fandom. When you dress up like spacemen and invade a hotel for a weekend, you need all the accomplices you can get. Still, amongst certain science fiction fans, sword&sorcery and Lovecraftian horror are the poor cousins you hide when company comes. I think this is part of SF’s terrible need to be legitimized in the eyes of mainstream literary circles. And this snobbery hurt Henry Kuttner.

The brilliant young writer exploded onto the scene in March of 1936 by writing an instant Mythos classic. “The Graveyard Rats” (Weird Tales, March 1936) is set in Salem, the town Kuttner decided to make his Arkham. The plot concerns a grave-robber who thinks he’s dealing with large rats. The reality is pure Lovecraftian horror. Kuttner followed it with “The Secret of Kralitz” (Weird Tales, October 1936), “The Eater of Souls” (Weird Tales, January 1937), “The Salem Horror” (Weird Tales, May 1937), “The Invaders” (Strange Stories, February 1939) and “The Hunt” (Strange Stories, June 1939), creating the Mythos entities of Iod, Vorvadoss and Nyogtha. 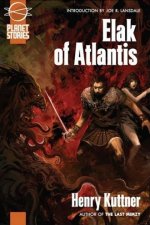 About the time Kuttner was winding down on Mythos, he started writing a series of sword&sorcery tales about Elak of Atlantis, featuring one tale called “Spawn of Dagon” (Weird Tales, July 1938), which also feels very Lovecraftian, as well as Howardian. Two tales about another sword-swinger, Prince Raynor, and Kuttner was done. And the damage was, too. He had a reputation in SF circles as a hack, an imitator. The only problem was that after 1940, he didn’t want to write Lovecraftian horror or Howardian fantasy. He wanted to be a science fiction writer.

Along with the bad came the good. In 1940, he married C. L. Moore, a fellow scribe of fantastic tales. The two of them settled down to write for a living. Using a dozen pseudonyms, Kuttner went about the job of changing his reputation. Writing as ‘Lewis Padgett’ and a dozen other pen names, he published classics (with and without his wife and co-writer), such as “Mimsey were the Borogove” and “The Twonky” (Astounding Science Fiction, September 1942). Years of producing sellable and innovative stories brought Kuttner back into the fold. He died in 1958 of a heart attack at only 43. His influence was felt by everyone from Richard Matheson to Robert Silverberg. The guy who was branded a hack ended up being one of the most stylish and influential writers of the century.

As a fan of Mythos fiction, Henry Kuttner and sword&sorcery, I’m left somewhat conflicted by this tale of rags-to-riches fame. I certainly don’t share any John W. Campbell-inspired snobbishness about science fiction. I’ve written in all three genres, though admittedly, not much SF. The larger question is really: has fandom changed since 1940?

Since that day, all three genres (sub-genres?) have had their glory days. John W. Campbell certainly brought SF into critical circles, though he and his own pre-World War II methods would be superseded by a new wave of writers in the 1950s. Sword&sorcery had a good run between 1968-1988 (though I watch my kids play World of Warcraft and ask, did it really ever go away?). Lovecraft has inspired more writers than just about anyone, except perhaps Ernest Hemingway. None of these types of stories has faded away.

Nor has Henry Kuttner. He’s not the household word he deserves to be, but then, he died young, like Robert E. Howard, like H. P. Lovecraft. Each has survived because there was someone around to remember them, to promote them. (Kuttner was one of those people in Howard’s camp.) So, yes, snobbery is there, but more important is kindness, a fondness for writers who are no longer around, for their bright and fascinating images, their dark and shadowy thrills. And all that remains to decide is which costume are you going to wear to the next con – the Deep One, the barbarian or an Asimovian robot? It’s all good.