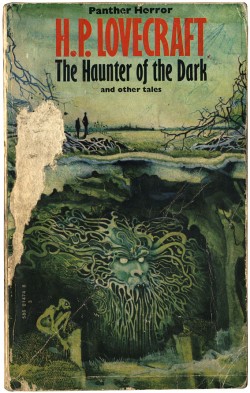 The Lovecraft Circle played a kind of game, one in which they shared manuscripts before publication, in-jokes, writing jams and putting little snippets from one another’s work into their own fiction. It was playing this game that created the Cthulhu Mythos. Lovecraft never called it that, but the game was there all the same, whether he was mentioning the creations of writers he admired such as Robert W. Chambers, Ambrose Bierce, or Arthur Machen, or those of his correspondents and friends, such as Robert E. Howard, Clark Ashton Smith and Frank Belknap Long. One of the best parts of the game was creating characters that were a thinly disguised portrait of another writer, not necessarily as they really were, but how they liked to imagine themselves.

“The Haunter of the Dark” (Weird Tales, December 1936) by H. P. Lovecraft features this version of Robert Bloch:

“For after all, the victim was a writer and painter wholly devoted to the field of myth, dream, terror, and superstition, and avid in his quest for scenes and effects of a bizarre, spectral sort. His earlier stay in the city – a visit to a strange old man as deeply given to occult and forbidden lore as he – had ended amidst death and flame, and it must have been some morbid instinct which drew him back from his home in Milwaukee. He may have known of the old stories despite his statements to the contrary in the diary, and his death may have nipped in the bud some stupendous hoax destined to have a literary reflection.”

“The Epiphany of Death” (January 1942) by Clark Ashton Smith features this homage to Lovecraft:

“…Somehow, Tomeron seemed never to belong to the present; but one could readily have imagined him as living in some bygone age. About him, there was nothing whatever of the lineaments of our own period; and he even went so far as to affect in his costume an approximation to the garments worn several centuries ago. His complexion was extremely pale and cadaverous, and he stooped heavily from poring over ancient tomes and no less ancient maps. He moved always with the slow, meditative pace of one who dwells among far-off memories and reveries; and he spoke often of people and events and ideas that have long since been forgotten. For the most part, he was apparently unheedful of present things…There was a like vagueness in the attitude of others toward Tomeron; and though he had always been accepted without question as a representative of the noble and otherwise extinct family from whom he claimed descent, nothing appeared to be known about his actual birth and antecedents. With two servants, who were both deaf-mutes, who were very old and who likewise wore the raiment of a former age, he lived in the semi-ruinous mansion of his ancestors, where it was said, none of the family had dwelt for many generations. There he pursued the occult and recondite studies that were so congenial to his mind; and there, at certain intervals….”

In “The Whisperer in Darkness”, Lovecraft describes Smith as the Atlantean high priest Klarkash-Ton. Robert Bloch parodies Lovecraft in “The Shambler From the Stars” (September 1935) and fellow Mythosian August Derleth as the Comte d’Erlette” in “The Suicide in the Study” (June 1935). Robert E. Howard’s mad poet Justin Geoffrey smacks of Lovecraft. And on it goes….

I’ve played the Mythos name game in several stories, but the one that takes the cake has to be “Black Sun” (Nightscapes, April 1998). I was able to work in the names of several current Mythos writers, including: James Ambuehl, Toren Atkinson, E. P. Berglund, Andrew Migliore, Stanley Sargent, Todd H. C. Fischer, David C. Kopaska-Merkel, C. L. Werner, to name a few. Seventeen in all, from friends and relatives to people I’ve never met. It wasn’t easy, but one of the ideas in the story is that distant space stations would be manned by clones (bearing the ‘son’ on the end of their name). The story shifts from POV to POV, allowing a cast of thousands. The result must have been at least a little entertaining, for I still get fan emails about it. I was proud of my score of 17, but the old master still holds the prize for “The Battle That Ended the Century” (June 1934), which contains 30 inclusions.

This kind of thing is fun, but does it hurt your Mythos fiction? That’s really a matter of opinion. A Robert Bloch tribute to HPL in a story may make me grin for a paragraph or two, but ultimately isn’t going to derail things for me. You may disagree. For a new horror fan, it may even be educational. I think I was more inclined to seek out Machen, Chambers et al. after encountering their odd bits here and there within the Mythos. It can also help you to form acquaintances with other writers. Fiction as social media. Remember that HPL didn’t have Facebook. One caveat, though: I do know, when I was editing my book The Book of the Black Sun, I did find cases where I had named characters after famous authors and wished I had not. Still, you have to let old stories stand or otherwise, the revising never stops. It can be fun, but remember that you may have to live with that name/character for decades afterwards. Proceed with caution, but have fun. Let the name games begin!