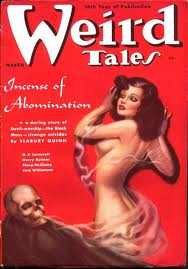 Unless you’ve read L. Sprague de Camp’s biography of H.P. Lovecraft or Sam Moskowitz’s Under the Moons of Mars (1970), you might not know that HPL had his start as a fanboy. Well, that’s what we call them today. In the letter columns of The Argosy and All-Story, they were known as “beloved readers”.

In HPL’s youth, he was one of those beloved readers, looking fondly for the next installment of an Edgar Rice Burroughs serial and then commenting in letters. (We all know that was something HPL loved to do, having written over 100,000 of them in his lifetime.) In the letter columns of The Argosy/All-Story, Lovecraft earned his first reputation as a critic – reviled by some, adored by others. The battlefield was the fiction of Fred Jackson, sentimental novelist of romances (in the boy-meets-girl sense of “romance”). HPL hated Mr. Jackson’s work and made no bones about it:

Whilst I am not wishful to be unduly censorious of any author, I must own that the Jacksonesque style of narrative inspires in me far less of interest than of distaste, and must express my wonderment at the extraordinary favour accorded its originator by the publishers….

Some readers of the Munsey magazines rallied with Mr. Lovecraft: “Tell Fred Jackson to can all of his heroines and then send the can to the government to be tested as an explosive….”

But many were against Lovecraft, mocking him and his affected, antiquarian prose:

Lovecraft has dropped from rime to prose,

To Shew that what he knew, he knows.

I say that really to my view

‘Twas little that he ever knew.

If he would use a few less adjectives and more words which the general public are more familiar with than ‘labyrinthine,’ ‘laureled,’ ‘luminary,’ ‘lucubration,’ and many others…I am an admirer of Mr. Jackson’s stories, but this letter of Mr. Lovecraft’s filled me with a distaste for our friend from Providence.

The editors of this war loved the responses either way, for they drove up circulation. They neither sided for nor against HPL or Fred Jackson, since they wanted to keep both and the corresponding attention.

In the end, HPL grew disenchanted with the Munsey publications (or it has been suggested he grew too poor to afford a copy) and let the feud fizzle out. His thoughts and feelings about horror, his tastes in reading material, would lead to an offer by the publishers of Weird Tales in 1924, for the editorship of that magazine. Only his dread of living in Chicago kept him in Rhode Island. (I often try to image Weird Tales under his guidance, and whether he could have stooped to publish the clunkers that Farnsworth Wright had to, by necessity, to fill pages.) Fred Jackson was never offered the job, to my knowledge.

From these early days, we can draw a couple of conclusions about HPL. First, he was familiar with the magazine fiction of the day. He read all the stories – the westerns, the jungle characters, the romances, every page end-to-end. All-Story and Argosy were general fiction magazines, existing before the specialisation of the Pulps in the 1930s. Also, we can draw the conclusion from HPL’s own works that romance was not a theme he chose to explore. None of his stories have even a rudimentary romantic angle. (“Kiss me, my love, as I must go out to see Cthulhu with mine own eyes!” “Yes, darling. Too bad it will drive you mad and the children will grow up without a father….”)

The facts of HPL’s home life and upbringing shouldn’t make this too hard to fathom. His parents were separated by his father’s illness (insanity) when he was three. Both parents died and Howard was raised by doting spinster aunts. Not a lot of romantic examples for a young man to see. He later married Sonia Greene and was said to be a perfectly “adequate” husband, but, by all accounts, she was the pursuer and he was sexual only out of obligation. The marriage ended in divorce after two years.

This brings me, finally, to my question: Can Mythos fiction be romantic?

I look to other authors of horror in HPL’s time and I pick Seabury Quinn as a man who felt obliged to deliver as much romance as a horror story could handle. Let’s remember that Quinn was considered THE most popular writer in all Weird Tales history (though his work has fallen greatly in the years since the 1950s). Phil Strong, editor of The Other Worlds: 25 Modern Stories of Mystery and Imagination (1942), said of Quinn, “‘The House Where Time Stood Still’ (Weird Tales, March 1939) is one of Seabury Quinn’s best stories and one of his worst. It is one of the ugliest and most ingenious; and on the other hand it demonstrates to an exaggerated degree his deplorable determination to have everything turn out right up to, and unhappily beyond, the point of using definitely farcical devices.” The events Strong is referring to feature horribly mutated experiment victims burning to death at the end, but the two lovers screaming their joy that they will soon be dead and together in Heaven.

Well, we certainly wouldn’t want that to become the mold for all horror tales. I think the best guide here can be found in HPL’s introduction to “The Supernatural Horror in Literature” when he says:

…Atmosphere is the all-important thing, for the final criterion of authenticity is not the dovetailing of a plot but the creation of a given sensation. We may say, as a general thing, that a weird story whose intent is to teach or produce a social effect, or one in which the horrors are finally explained away by natural means, is not a genuine tale of cosmic fear; but it remains a fact that such narratives often possess, in isolated sections, atmospheric touches which fulfill every condition of true supernatural horror-literature. Therefore we must judge a weird tale not by the author’s intent, or by the mere mechanics of the plot; but by the emotional level which it attains at its least mundane point. If the proper sensations are excited, such a “high spot” must be admitted on its own merits as weird literature, no matter how prosaically it is later dragged down. The one test of the really weird is simply this – whether of not there be excited in the reader a profound sense of dread, and of contact with unknown spheres and powers; a subtle attitude of awed listening, as if for the beating of black wings or the scratching of outside shapes and entities on the known universe’s utmost rim. And of course, the more completely and unifiedly a story conveys this atmosphere the better it is as a work of art in the given medium. 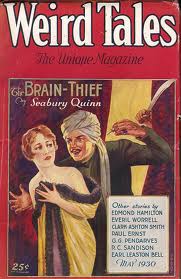 Romance, as with most other elements, is not primary to horror. If it does not enhance the horror, it’s a distraction. Which isn’t to say that romance is irrelevant. A good horror writer creates likeable characters, ones we can care about, to fear for in the course of the story. This can be done with romantic elements. Dean R. Koontz has proven this time and again. His form of suspense/horror usually involves plenty of romance. Is it as scary as Lovecraft? That’s a matter of opinion, but I think not. Still, millions of readers find Koontz enjoyable in a way that is closer to HPL than it is Fred Jackson. Each writer has to find that balance between crafting characters and their emotional lives, and the larger job of scaring the crap out of the reader. When that balance is struck, the rewards are endless.

Thus, I declare this war is at an end.