The earliest Lovecraft adaptation was The Haunted Palace in 1963. Using a title of Poe’s and a plot of HPL’s, Roger Corman serves up a Vincent Price fest written by master horror writer Charles Beaumont. Since then, if you can believe Andrew Migliore and John Strysik’s The Lurker in the Lobby: A Guide to the Cinema of H. P. Lovecraft (2005) (and you can) there have been about a 100 films (both major and minor budgeted ones) since. In those 100 films, there are but a handful of creepy moments, plenty of unintentionally funny ones, and ultimately, none worth toting as the greatest Mythos film of all time. And why should this be?

First off, let’s acknowledge that most movies work because they have great characters or dynamic situations. Neither of these is really HPL’s strong suit. His characters are all cardboard and his creepiest stuff happens offstage. What is great about HPL’s Mythos is the underlying mythology that haunts it. Films that convey that creepiness best are ipso facto the best HPL films. I would remind everyone that the following critiques are my opinion and these films may have worked for you. That said: get your own column. 😉

Let’s look at a few of these films and we’ll see why:

Not Enough of the Old Gent

Die Monster Die (1965) Despite having Boris Karloff in it, this film feels more like a 1950s Sci-fi B-flick than horror. It quite simply doesn’t use enough HPL.

The Unnameable (1988) is a more recent film that makes the same mistake. It uses a very thin story of HPL’s, so it must create its own content. That content is disappointing and not very Lovecraftian. The sequel was just as thin, but at least it had a very naked woman walking through most of it.

The Dunwich Horror (1970) starred Dean Stockwell (whom I like as an actor but in less serious roles) and actually used real ‘Lovecraft-certified parts’. It is still a stroll down Dull Lane. The first openly-HPL film it is still merely academic.

Cthulhu (2007) This film, with a small part by Tori Spelling, mixes the Marsh/Deep One story line with gay issues. While it creeped me out in some ways, they weren’t Lovecraftian ones. Not enough monsters, good dialogue, or caffeine to survive a second viewing.

Re-Animator (1985) There is something to be said for the over-the-top role of Bruce Campbell (as Ash) in The Evil Dead films. Silly but fun. Geoffrey Coombs as Herbert West is in this tradition. But is it scary? Is it good HPL? You can’t argue with success, I guess. But I’d like to see a serious film that pulls off the Mythos thing. Just one. (Kinda like a Doc Savage movie, but that’s a moan for a different blog.)

Dagon (2001) I get it. The budget is small. So, the writing has to be good to make up for that. It has to. Or else you end up with octopo-porn. Nuff said.

So, what films have succeeded where these have all failed? One filmmaker strikes me as the best director (so far) of Lovecraftian films – partly because he will deliver an unhappy ending and partly because he is willing to experiment film to film, he has had more success. That man is John Carpenter.

The Thing (1982) While this story is said to be based on John W. Campbell’s “Who Goes There?”, John Carpenter is equally inspired by Lovecraft. “At the Mountains of Madness” is an equal partner with Campbell’s tale of scientists stuck in the Antarctic with a shape-shifting monster. Carpenter’s fearless endings (ie: people die) are more in tune with HPL’s philosophy than John Campbell’s that technology (and good American values) can fix anything.

Prince of Darkness (1987) This film accomplishes something other films fail to do, and that is combine Science Fiction and horror in a Lovecraftian way. Again, Carpenter isn’t afraid to give us a downer ending. The final feel is one of no escape, a sentiment HPL would have approved of.

In the Mouth of Madness (1995) This one is half a good movie. It starts really well, but craps out half-way with nowhere to go. It is perhaps the most openly big-budget HPL movie that also acknowledges Stephen King in an off-handed way, but ultimately confused. (And not in an HPL dream kinda way. In the ‘I want my 10 bucks back’ kinda way.) 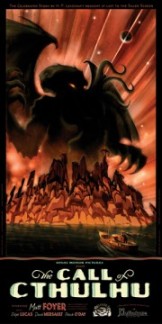 The Descent (2005) and The Ruins (2008) give me hope. While The Descent is not actually based on HPL, it gets all the Marstense ghoul stuff right that The Lurking Fear did not. This is creepy stuff. I haven’t seen the sequel, yet, but I have high hopes. The Ruins was Scott Smith’s huge hit. It’s basically just Clark Ashton Smith, but what the hell; it works. Also of note is The Call of Cthulhu (2005), a silent film made to look like an adaptation from 1926. To a non-fan, this might be merely an academic exercise; to someone who enjoys HPL’s work, it is a treat. We can wait for another big budget adaptation (The Mist (2009) was good though I hated the ending). CGI opens up possibilities.

So what can a writer take away from these movies? Not everything that works in print, works on film. Still, there are occasional bits that may spark ideas for stories. I try to search for what may have made the film work better. There is usually a lesson there. How could they have pulled off that concept? What would have made it scarier? What bored me because I’d seen a thousand times before? Watch and learn. If it bores you in a film, it’ll be ten times worse in print. Films can help fuel the creative juices if you look at them as broken machines that could run better. You’re the mechanic. And while you’re getting all greasy, I’ll just sit back with my popcorn and enjoy these old Night Gallery reruns….