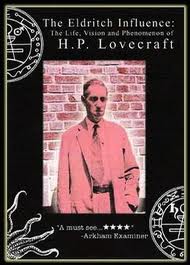 As someone who is not only a big fan of H.P. Lovecraft, but a guy who enjoys well-made documentaries, I naturally watch all docs on HPL that I come across. In fact, I have discussed a great one here before called “Lovecraft: Fear of the Unknown“. If you’ve missed it, give it a look, won’t you? Anyway, I thought it was time to spotlight another documentary on our favourite weird tales author. In fact, I’m going to cover two of them, one today and the other in the following CEtM article, so be sure to come back for that. Okay, that bit of teasing aside, let’s get down to it and experience some influence of the eldritch kind.

The Eldritch Influence began making the rounds on the film festival circuit in 2003 and, a few years back, it made the jump to DVD but sadly, with little fanfare. In fact, I only stumbled across it a few months back, myself, and I’m usually very aware of such things. So, it may be a little late, but I hope to change peoples’ awareness of this film, even if it’s just by the smallest amount. The really good news is that it’s still available directly through the filmmaker’s Hermetic Productions website here: http://www.hermeticproductions.com. But now, I guess I should tell you why you should get this doc, right? Okay, keep on reading.

This is a feature-length (86 min) and very informative film. It hits the highlights of Lovecraft’s life and work, discusses his influence on his peers and, through them and others, on the world of horror at large. The general overview of his mythos – usually referred to as the “Cthulhu Mythos”, but alternately, and more correctly, called the “Lovecraft Mythos” – is covered in good detail. For those not familiar with Lovecraft’s writings, this makes for a good introduction. For fans of HPL, it’s more of a reminder of why we fell in love with his stories in the first place.

In addition to the historical information on Lovecraft, there are numerous interviews with contemporary authors: Ramsey Campbell, Neil Gaiman and Brian Lumley. Filmmaker Stuart Gordon (director of Re-Animator, From Beyond and Dagon) comments on why he’s drawn to adapt Lovecraft’s stories to film, and noted Lovecraft biographer and expert S.T. Joshi explains how the man from Providence, Rhode Island changed the horror genre forever.

Perhaps the only unnecessary part of the entire documentary is an odd piece near its end where we meet a “real” (Yes, those are ironic quotation marks) cult devoted to the Great Old Ones. This little bit of rather-poorly-acted fiction is totally out of place in the otherwise-fine film and seems to only have been included to act as filler to pad out the runtime. Either that or director Shawn Owens promised to put his LARPing (Live Action Role-Playing) friends in his movie. As an avid fan of Cthulhu and his pals myself, I applaud the members of this playtime cult for their enthusiasm; I just wish they had kept this bit of silliness to themselves.

That one questionable inclusion aside, The Eldritch Influence is a first-rate documentary, fun to watch for both fans and neophytes of Lovecraft’s stories. I can readily recommend it to anyone. Even in the unlikely event that you’ve never heard of H.P. Lovecraft, but enjoy the stories of Campbell, Lumley, and/or Gaiman, it’s still worth watching, if only for those interviews.

Final Verdict: while this documentary has no sensational secrets revealed to the diehard Lovecraft aficionado, it is still entertaining and enjoyable. The “talking heads” interview segments with modern Mythos masters are especially fun and you get some interesting bits on their views of Cthulhu & Co. The Eldritch Influence is a great way for Lovecraft fans to spend about an hour and a half of their time and soak in the goodness of HPL.

You can buy The Eldritch Influence: The Life, Vision and Phenomenon of H. P. Lovecraft at Amazon.com.

Bio: Brian M. Sammons has been critiquing all things horror, science fiction, dark, or just plain icky for over a decade. His reviews and columns can currently be found in the pages of these magazines: Cemetery Dance, Shock Totem, and Dark Discoveries, and on these websites: Horror World, The Black Glove, and now here. Not being satisfied with being a humble and handsome critic, Brian has penned a few tales himself. They have appeared in the magazines Bare Bone, Cthulhu Sex, Dark Animus, and Horror Carousel, and in the anthologies Arkham Tales, Cthulhu Unbound, Vol. 2, Horrors Beyond, and Twisted Legends, among others. He has also written extensively for the Call of Cthulhu role playing game in an attempt to corrupt as many new, young minds as possible. Despite all this, Brian is often described by his neighbours as “such a nice, quite man”, and he loves animals.