[dropcap]P[/dropcap]laying right now on the festival circuit is H.P. Lovecraft’s The Shunned House, a short film (roughly ten minutes long, not including credits) adapted for the screen by Kelly Young and directed by Eric Morgret. Now, if you have already read the HPL story, then you 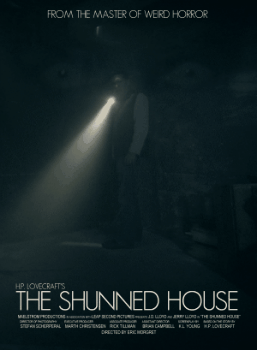 know the basics behind this film. This movie does change things up a bit, but are those changes for the better, or are they like so many movies that begin with the words, “H.P. Lovecraft’s,” and are far less than good? Well, let’s open up the door to this house, go inside, and find out.

The movie is set in the modern day, with an uncle and nephew pair of ghost hunter types making the mistake of investigating the titular house. The dilapidated building has quite the history of misery and death surrounding it, and the house this movie is set in does a pretty good job at radiating menace from the outside. Too bad we don’t get to see much of its inside. All too soon, the characters, ably played by Jerry Lloyd and J.D. Lloyd (who are surprisingly not related), go right to the house’s basement and that’s pretty much where the entire film takes place. Worse, yet, most of this movie is delivered as an exposition dump. Oh, it is a spooky story, to be sure, and actor Jerry Lloyd does a good job of spinning the tale, but when all’s said and done, it’s one man, looking into a camera, telling ghost stories for the majority of this film, short as it is.

Now, I’m really trying not to be unduly harsh. Yes this is a short film made on a shoestring budget. It is the very essence of a labor of love and it shows. However, it is frustrating that around the edges of this mini movie are signs that it could have been more. Case in point, there were two flashback scenes that accompanied some of history from this house’s dark past. Those parts were well-done and even kind of creepy, yet they were only on screen for seconds, a minute or so at most. If the majority of this movie focuses on the past, then that past should really have been shown to us more and not just told to us by one of the actors monologuing into a camera.

But lest you get the wrong impression, there are some good parts to this film, too. There are a few BOO scares that are pulled off well, not to mention some digital trickery that is used sparingly and to good effect. The proper creepy atmosphere is established early and, for the most part, maintained throughout the film. Well, except for the end of the flick and that is my biggest gripe with this short movie.

Don’t worry – I won’t give away the ending of either the Lovecraft story or this movie. I will say that the film ends totally differently than the story and that’s not a good thing in my book. Love or hate the tale that HPL wrote, you’ve got to give the man points for putting his own twist on the old vampire legend. Here, things are played out far more traditionally and lack that Lovecraftian feel from the story.

Is that bad, in and of itself? No, everything is still within the realm of horror and done well, but it does feel like an unnecessary change and a lesser ending to the story. Am I saying that the ending to the story as Lovecraft wrote it would have translated well to cinema? No, I’m not, but the “big discovery” at the end of the HPL story could have been altered to be a different “big discovery.” Something more animated and horrifyingly recognizable than what Lovecraft penned would have made for a good ending here. At least it would have been more faithful to the source material and certainly not as commonplace as what we get in this movie.

[dropcap]F[/dropcap]inal Verdict: Is H.P. Lovecraft’s The Shunned House a Lovecraftian movie? Sadly, I must say no, despite its title. The part that made it Lovecraftian has been completely cut away. What you’re left with is a haunted-house vampire story that seems all-too-familiar. Does that mean you shouldn’t watch it? Hell, no. It’s still a good, if somewhat more generic, horror story. It is well-acted and shot, and it is an enjoyable way to spend ten minutes. Also, small independent horror needs your support, or else it will die off just like the poor unfortunates who lived in the Shunned House. So, if you get a chance to see this movie, do so. Should the producers release it on DVD, pick up a copy if it’s not too overpriced for a ten-minute film. Just don’t go into it expecting a faithful adaptation of HPL’s short story and you won’t be disappointed.