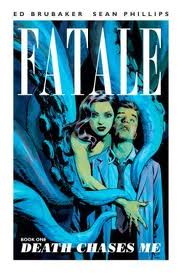 I’ve been under the weather and haven’t been able to write a Found on the Net. Did you miss me? At any rate, I’ve got acool Lovecrafty thing to talk about today.

Ed Brubaker and Sean Phillips’ horror comic book series Fatale features Alfred Ravenscroft, a Lovecraft stand-in and pulp horror writer. Fatale has been described as a supernatural noir story, initially announced as a 12-issue maxi-series, but upgraded to an ongoing title in November 2012. It follows the titular fatale, Josephine, in the present and the past. She is possibly an immortal creature and probably dangerous.

In a recent interview, Brubaker says:

I like Lovecraft a lot more in theory than in reality in some ways. There’s no dialogue in [his stories]. It’s rough going, as a modern reader. But what I like is, he created this mythology, and he made the stuff that you’re not seeing the stuff that’s the scariest. The idea of Cthulhu arriving is what drives people crazy, and I love that.