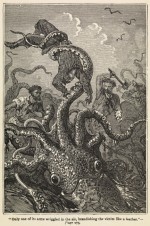 Terrifying news: squid can fly. Marine biologist Silvia Maciá has provided photographic evidence that shows squids can fly. Maciá’s study, featured in a 2004 issue of the Journal of Molluscan Studies, found that gliding squid are not uncommon, pointing to around six species known to leap from the water, some of them even flapping their fins.

The flying squid use a kind of “jet propulsion to project themselves out of the water” and then employ their fins to direct their movements. Apparently, this might help them escape predators and travel faster.

Um, you know what that means, right? Flying Cthulhu. For a long time, Lovecraftian scholars have theorized that Cthulhu would swim out of his undersea kingdom and then proceed to eat us all. This photographic evidence suggests Cthulhu may fly through the air and flap his tentacles as he devours us. Picture an army of flying, man-eating squids preying upon humanity and zombies don’t look so scary anymore, do they? It also gives some much-needed recognition to that second Piranha movie, which warned us fish don’t always stay in the ocean. Neither do squids. Nor Cthulhu.

Keep watching the waters. Or the skies. Both. Just watch both, for the love of God.