Judith Doloughan, cowriter of the Fraterfamilias trilogy, was born today in Manchester, England in 1944. Rationing was a constant feature of her early years and times were hard. Her mother was a local girl, her father a GI from Texas whom she never met. Her mother later married and emigrated to North America. When she was eight, Judith followed her mother to Canada by boat. Their relationship was very troubled and that affected the rest of her life.

Judith’s life was tragic and romantic in both the 19th and 20th century senses. After living in the U.S. and Canada with her family, she left home. She rode with the Freedom Riders, taught school, studied painting and lace-making, got married, had a child, got divorced. Eventually, she joined the Canadian Coast Guard and was stationed as a cook up in the Arctic. This was the first thing that changed her life. The second was meeting her second husband, Graham, there, the man she considered the love of her life.

Her years in the Arctic were, by her own estimation, the happiest of her life. She loved living and working there, loved the silence and the space, the wildness. Graham encouraged her to go back to school, where she got an engineering degree.

It didn’t last. The distance put a strain on their relationship and they ended up divorced. Graham married again. They remained friends, though, and there was a possibility at one point they might get back together. However, Graham died under mysterious circumstances soon 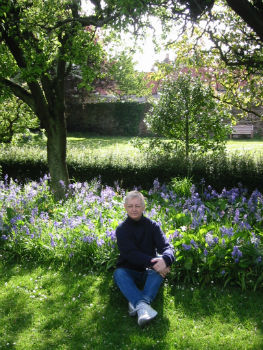 after. Judith always suspected foul play, but could not get the local authorities to investigate. Following his death, she lost heart, leaving the Arctic and the Coast Guard. Returning to her favorite home, Vancouver, she discovered she had cancer, got treatment, moved to Nova Scotia to be with her daughter for a while, and then moved back west.

We met online while Judith was still in Dartmouth. Fraterfamilias was originally her idea. We wrote most of it in the summer of 2001 and decided to keep that fin de siecle atmosphere after 9/11 hit. The novel kept growing until we finally finished it. Then we did a novella sequel that we talked about expanding. The first novel, meanwhile, we sent out. We quickly realized that it was too big to sell as a first novel, so we split it into a trilogy: Fraterfamilias, Confraternitas and Pro Fratria.

The urgency to sell the thing clicked up more than a notch when Judith’s cancer returned in 2005 and she was told she only had a few months to live. We managed to sell the first installment and it came out, as a serial and ebook, with Virtual Tales (now defunct). In hospice, Judith finished a solo SF novel, a book on writing, and part of a contemporary novel. She died in 2007, two years after she was declared terminal, soon after the first book came out. We both agreed the need to write down everything she could before she died kept her alive so long beyond her diagnosis.

Judith wasn’t perfect (Who is?), but she was a good friend. And what you saw was always what you got. There was no guile in her. She was fierce and loyal, stubborn and generous. This made her as many friends as it did enemies. I still miss her.

I hope you get even a little of the real Judith from the Fraterfamilias books. It was a fun write and it’s still a fun read, this spirit voice from beyond the grave.

Fraterfamilias was reissued by Innsmouth Free Press in 2010. Its sequel, Confraternitas, will be out this summer. The third book, Pro Fratria is due out in 2014. You can find out more about Judith on her LJ, Home Sweet Home, on which she posted regularly the last year of her life.