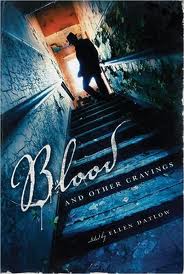 Award-winning Editor Ellen Datlow has a new anthology out, called Blood and Other Cravings. She was kind enough to stop by Innsmouth to briefly talk about, you guessed it, vampires.

IFP: What is your definition of a vampire?

ED: Generally, a supernatural creature that steals a human’s essence, usually blood but sometimes other crucial elements of the life force.

IFP: How is Blood and Other Cravings different from other vampire anthologies on the market?

ED: It’s an anthology of vampirism, not merely vampires. Although some of the vampiric creatures in the stories are human, not supernatural creatures, the important aspect of them is that, while some of them consume blood, others consume energy or other crucial elements that humans need to thrive.

IFP: You’ve done several vampire anthologies. What keeps you coming back to them?

ED: The fact that I know I can persuade writers to create new and fascinating takes on them.

IFP: What makes a good vampire story and what can kill it?

ED: Today, it’s virtually impossible to write a great vampire story that is about the “discovery” of a vampire in the midst of a group. Every reader is familiar with the tropes of the usual vampire story, so if a victim turns up bloodless and with bite marks on her/his neck, the reader immediately knows: “Oh, a vampire.” So, the story where that’s the main point of the story is trite.

But what makes a good vampire story is what makes any good story – intriguing characters, fine writing, and a riveting plot.

IFP: Who is the scariest literary vampire?

ED: Dracula is still pretty scary (I admit to having read it for the first time about ten years ago). I’m sorry I didn’t read the novel earlier. Also, Miriam Blaylock of Whitley Strieber’s, The Hunger, always gave me the creeps. I felt sorry for her, but the ultimate fate of her victims was one of the most horrifying I can imagine.

IFP: Vampires are obviously hot right now. Zombies, too. Are there any other trends in horror fiction you can tell us about?

ED: I’m awful about trends – sometimes, my agent will suggest something to me, but usually not in horror.

IFP: What are you working on next?

ED: I’m currently working with Terri Windling on a Victorian Fantasy anthology for Tor. And, as usual, The Best Horror of the Year #4.

IFP: What is your dream project?

ED: I’d love to edit an original, non-theme horror anthology series, every other year or so, but I find them impossible to sell. And dolls – nasty, horrific dolls. I have to finish up the proposal and hope a publisher is interested.

IFP: If you were a character in a vampire story, would you be the vampire or the vampire hunter?

IFP: Well, there you have it. Thanks for stopping by! Blood and Other Cravings is out now and you can find it at your favourite bookstore.

Bio: Multiple award-winning editor Ellen Datlow has been editing science fiction, fantasy, and horror short fiction for almost thirty years. She was fiction editor of OMNI Magazine and SCIFICTION and has edited more than fifty anthologies, including the horror half of the long-running The Year’s Best Fantasy and Horror.