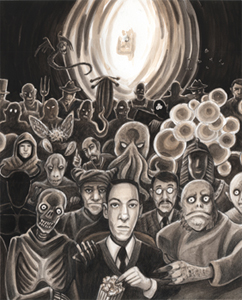 IFP: How did you start painting?

JV: I started painting with watercolours when I was 13. Eventually, I went to art school in Milwaukee, Wisconsin for painting.

IFP: What draws you to horror?

IFP: What inspires you?

IFP: Who are your favourite artists?

IFP: How did you get involved with The Whisperer in Darkness? 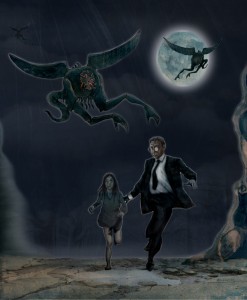 JV: I worked with Andrew Leman back in 2000 on the Aaron Vanek film, The Yellow Sign. I did many of the paintings used in the film of the crazed artist character. I ran into Andrew and Sean over the years at the Lovecraft Film Festival in Portland, and was impressed with their rendition of “Call of Cthulhu”. In the summer of 2010, I heard through a friend that Andrew was looking for help on Whisperer for some miniatures. I contacted Andrew and I came over to the shop, and we talked about what needed to be created for the film. I recommended that we also bring in my long-time friend, Fred Manchento, someone I had known for years, to also work on the project, and the three of us worked really well together. Fred actually became the lead miniature artist on the film.

IFP: What kind of work did you do for the film?

JV: I created the miniature telescope, which is only seen briefly near the end of the film. I created several of the Mi-Go scientific-looking devices hidden away near the rear of the cave scene and a few other things not seen in the film. Fred and I also constructed the Mi-Go ladder I designed for Wilmarth’s climbing POV. Mostly, the three of us worked on the large Vermont Round Mountain miniature. Fred and Andrew worked the lion’s share on that huge piece. Hundreds of trees were created. I think it turned out really great.

IFP: How did you discover Lovecraft?

JV: I started playing Call of Cthulhu the RPG in 1984. I went to Gen Con 17 and met Sandy Petersen, and bought a copy of the 3rd edition rulebook, and I started reading Lovecraft.

IFP: What is your favourite Lovecraftian story not written by H.P.?

JV: “The Mound” is one of my absolute favourites. I know Lovecraft edited so much of it that it’s basically a Lovecraft story, but what a great story. I’m also a fan of Brian Lumley’s Titus Crow stories and The Horror at Oakdeene.

IFP: What Lovecraft films do you enjoy?

JV: I really liked Alex Turner’s 2004 film Dead Birds. Dan O’Bannon’s The Resurrected has moments in it which are very good. Brian Moore’s Cool Air is very good for such a low-budget film. So many good short films at the Lovecraft Film festival over the years. I always enjoyed seeing those over big Hollywood productions.

IFP: If you could be a Lovecraftian creature or character who would you be and why?

JV: To be Randolf Carter and travel to the Dreamlands would be my choice! Wouldn’t the Dreamlands make a great setting for an MMORPG? I know I would subscribe monthly.