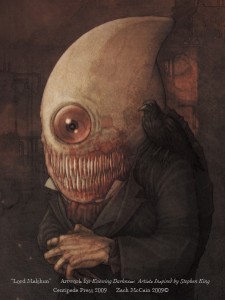 Zach McCain is an internationally published artist who is primarily known for his illustration and cover artwork in the horror and science fiction genres. His work ranges from book and magazine illustration to graphic design, album art and RPG games. He resides in Texas near the Gulf Coast.

IFP: What drew you towards illustration?

ZM: Desperation. I had been laid off from a video production company I was working for and couldn’t find a job for nearly a year. I had no real qualifications for the jobs I was applying for, anyway. So, I started to think of what I was good at and what I could do that didn’t require a detailed resume. I was always good at drawing as a kid, so I thought I’d give it a shot. I already had some fan art I had done from Stephen King’s Dark Tower series, so I started submitting to small horror magazines and I ended up getting accepted right away.

IFP: Tell us about your techniques, medium, work process, etc.

ZM: When I started out, I was doing black-and-white pencil drawings for magazines such as Cemetery Dance Magazine, which had black-and-white interiors. As I moved up to book illustration, the publishers wanted them in colour, so I began to colour my pencil drawings digitally in Photoshop. After a few years of doing illustrations this way, I got tired of not having originals that I could sell. People began emailing me, asking if they could buy a particular cover or illustration, and I had to tell them that all I have is a pencil drawing that is not coloured like the finished picture they saw. I sold prints of my digitally coloured pencil drawings to make up for this. One of the things that bothered me about the digital aspect of my illustrations was that I had no hard copy to hold in my hands. That’s when I decided to start oil painting. I have no training or experience with painting, so I’m just learning as I go along. I paint on canvas or masonite or whatever I have available at the moment. As for my work process, what usually happens is I’ll have a publisher email me with his or the author’s idea of what they want the cover to be. I’ll do a couple of sketches and show them to the publisher. After he decides which he likes best, I’ll start painting. I’ll send the publisher photos of the painting in progress as it goes along.

IFP: Where do you draw inspiration from? 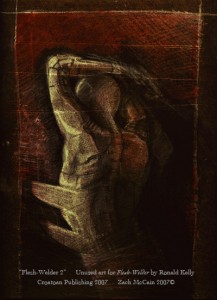 ZM: I’m a fan of film and so, there are many directors who’ve inspired me. George Lucas and Steven Spielberg are just two, for example. Stanley Kubrick and his dedication to excellence also inspires me. As for inspiration for a particular piece of art I’m working on, I don’t really draw from anything consciously. I try not to look at what other artists are doing so as not to copy anything they are doing. I especially don’t look at any current artists or trends. I try to do my own thing without outside influence, as much as possible.

IFP: Why does fantastic artwork interest you?

ZM: It probably has to do with my childhood. I wasn’t raised around fine art, like most people today, but popular art, instead. Movies, comic books and monsters. I saw Star Wars when I was a kid, watched The Incredible Hulk and Spiderman on TV and loved Godzilla. A painting of a monster is far more interesting to me than a painting of a bowl of fruit. Anybody with a modicum of talent can paint from a photograph, but to paint strictly from your imagination is something else. Frank Frazetta’s paintings are the type of thing that impress me. Creating worlds from your own imagination. H.R. Giger is great at this, as well.

IFP: How did you start painting Lovecraftian imagery?

ZM: As a kid in school, I was drawing Giger’s alien in class so, without even knowing it, I was drawing Lovecraftian imagery. I would say my first Lovecraftian imagery was filtered through Giger. It continued with my drawing of creatures from Stephen King’s books. Once I became an illustrator, I couldn’t help but draw Lovecraftian style imagery, since the books themselves contained monsters with such descriptions. But my first official Lovecraft book that I did the cover art and illustrations for was The Crawling Chaos and Others: The Annotated Revisions and Collaborations of H. P. Lovecraft. I’ve continued to get Lovecraft books since.

IFP: How did you discover Lovecraft?

ZM: I first discovered Lovecraft by reading Stephen King’s books. He had a story in Nightshift called “Jerusalem’s Lot” that had a giant worm god. Yog Sothoth, I think it was. I discovered that Yog Sothoth was from Lovecraft and, around the same time, I saw Evil Dead 2. I then discovered that the Necronomicon in the movie was also from Lovecraft. I was in middle school when all this happened. So, that was how I became aware of Lovecraft. I’m still learning today how huge his influence is. When it comes to the horror genre, Lovecraft’s influence is everywhere. It’s amazing.

IFP: What is Supernaut? 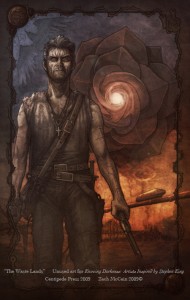 ZM: Supernaut is a comic book I’m currently working on between jobs. A personal project of mine. It’s my response to the President shutting down the shuttle program and forcing NASA to pay the Russians for access to their Soyuz spacecraft in order for our astronauts to access the International Space Station. I grew up in the 80s and NASA, especially the space shuttle, had a huge impact on me as a kid. To see our space program effectively gutted hurt me in a big way. I grew up in a time when the United States was the leader when it came to space exploration, but now, China is quickly taking over that role. I wanted to do something about it. But as an artist, there isn’t really anything I can do other than use my medium to tell a story. I don’t have the money or means to make a movie, so I realised a comic book was all I could do. The end of the shuttle program and the Chinese dominance of space sets the stage for the story. Many of our best scientists and engineers lost their jobs because of this and so, the comic book begins with one of these engineers who worked on the space shuttle. American ingenuity, perseverance, being the best you can possibly be, Supernaut deals with these themes. It’s also the story of a boy who’s lost all hope, and how he manages to find inspiration and a love of life that he once had. Right now, I’m still working on the first issue of a three-part series. I don’t want to give away who or what the title is referring to just yet, but I will reveal more as the first issue nears completion. I also have a second comic book project that I’m working on with another artist, but we aren’t ready to announce the title, yet. This other comic is very different from Supernaut.

IFP: What are you working on right now?

ZM: I just finished a Lovecraft-themed cover for one publisher and a space/vampire cover for another, so at this very moment, I’m working on Supernaut. I’m working on the comic book any time I have a break between jobs, which isn’t very often, so the comic is progressing much slower than I anticipated. I also do other little odd jobs, such as text for covers, dust jacket layouts, foil stamps, and more, when I’m not working on a cover painting.

IFP: What do you when you are not painting? 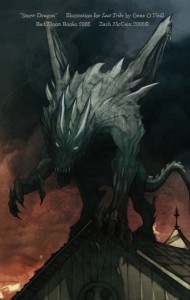 ZM: When I’m not painting or working on the comic book, I like to relax outdoors. Since I’ve started working full-time as an illustrator, I barely have any free time. I don’t get weekends off like someone with a 9-to-5 job, for example. So, whenever I have the chance, I just like to sit outside in the garden, watching the clouds or the stars. I live out in the country, in the middle of nowhere, and so, the view of the stars at night is amazing.

IFP: What is your dream project?

ZM: There are so many its hard to pick just one. The list would go on and on. But to work on a project with Steven Spielberg would be a dream-come-true to me. Or something with Godzilla. I’m a huge Godzilla fan.

IFP: If you could be a Lovecraftian character or creature, who would you be and why?

ZM: Neither. The creatures live a hellish existence and the characters always seem to have a terrible fate. That’s part of what makes Lovecraft’s work pure horror by definition. To be in a Lovecraft story would be something straight out of a nightmare! 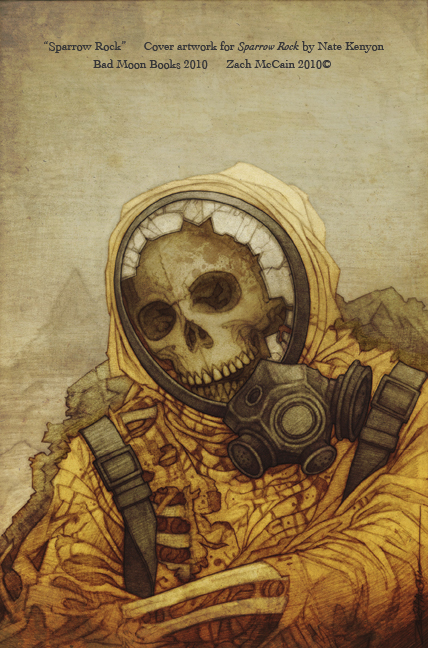