[dropcap]H[/dropcap]ow you make your exit is often just as important as how you make your entrance. This is no less true for writers than it is for actors. The aim is to end everything on a high note, but that’s never a guarantee. Thankfully, Joe R. Lansdale, Tim Truman and Sam Glanzman managed to hit that elusive high note as they bade a final farewell to Jonah Hex, a character that they had done much to rehabilitate through the 1990s. Nor were they particularly solemn about it – their final effort, Shadows West, reads like a long-running joke that some old cowhand would be telling the young tenderfoots around a campfire.

We start in a bar somewhere close to the Dakotas, where one Judge Griffith is holding court on charges of murder against Hex. Hex gets acquitted on the grounds of self-defense…only to find the very angry family of all six people he killed waiting for him outside. It prompts this exchange, which sets the tone of the whole story:

Cowboy: What you didn’t know, Hex, is we got a big family!

Hex: Yeah, but it’s getting smaller.

In the course of the shootout that follows, a witness to the trial named ‘Long Tom’ (so-named for being a dwarf who seems to be compensating for that fact of life with the biggest guns he can handle) comes to Hex’s aid and offers him a job. See, Tom’s attached to Buffalo Will’s Mess of Riders (No, that is not a typo; the head honcho actually calls himself “Will”), a traveling Wild West show.

It doesn’t take Hex too long to find plenty to hate about it. Buffalo Will is a neurotic little man with an inferiority complex about Buffalo Bill Cody and his more successful show. A braggart and would-be hard guy named ‘Shooting Smith’ gets on Hex’s bad side enough to literally have a 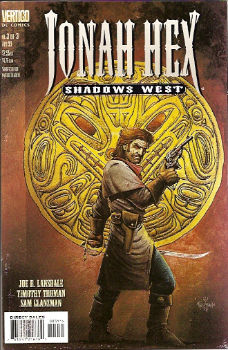 gun rammed up his ass. Then there’s the squaw that the show is using for prostitution purposes (One would-be customer makes the mistake of slapping her while Hex is close by, which earns him a beating). She’s got a son whose part-human and part-bear. According to her, it was conceived by a bear who came to her in the form of an Indian brave. Will is keeping the little one out of sight right now, as he wants it to be his ace in the hole against Cody. Out of spite, Hex messes that plan up but good.

This is easily the shortest of the Hex series (The mini-series only ran three issues), but it’s also the most fun…and funny. In addition to the characters I’ve mentioned, there’s also Hex’s Indian comrade-in-arms Spotted Balls (who became Spotted Hand at Will’s show for reasons we do not need to explain), who defies a good many Indian stereotypes, and Libby Ann Blue, Will’s version of Annie Oakley, who routinely makes it plain to her husband who’s really wearing the pants in the family. The chase that follows Hex’s decision to blow sends everything off in all sorts of crazy directions. The heart of the conflict in this series rests with Tom, a little man who is loyal to Will to the point of being misguided (and doesn’t take kindly to any cracks about his size from Smith), and Hex, whose first loyalty is always to what he believes in. Given what he saw at the trial, you’d think that Tom would have exercised better sense. Then again, if he did, there wouldn’t be a story, would there?

There is also a trace of Native American mythology in the denouement of the tale with the final revelations of the squaw’s people in the Black Hills. Of course, any solemnity and reverence that you might be feeling has to compete with the funny complication that the cub has learned several curse words from Hex’s mouth over the course of getting him and his mother there.

One thing about this last round’s artwork from Truman and Glanzman annoys me to no end…and it has nothing to do with either man. No, this comes from a very unfortunate trend in comics at the time called “digital color separation.” The industry had tried some digital coloring with a limited amount of success, but, by the late 1990s, the digital services were mainly restricted to just doing color seps. It doesn’t work for this artwork. Part of what made Truman and Glanzman’s artwork from the first two series work so well was the bleeding of color onto everything in the picture. With the digital seps being used here, it just makes the art look sketchy and unfinished, not up to the usual standards that I came to expect from the previous efforts. Thankfully, the covers to the series don’t suffer from this nonsense.

Still, the story itself is so good that you find yourself not minding too badly and the artwork can’t be destroyed by the techno-tragedy that has been foisted upon it. Though Jonah Hex would go on to have his own regular series some years later in the 2000s, this was the creative sunset of the character. Not many old-time characters get a second chance and we should be grateful to Lansdale, Truman and Glanzman for getting this one so, so right.