Screw the box office … want to know the true measure of a film’s popularity these days? Check out how much it’s being rented. At my local Blockbuster (one of a dying breed which, I am told, is being used to push Dish TV to the point where they can kill the store … but I digress), Hansel & Gretel: Witch Hunters has been nearly impossible to get ahold of all summer long. The only conclusion I can draw from that fact is that the film must have done SOMETHING right. But the only way to know is to actually watch it and so I have.

The first six minutes start with a rehash of our title characters’ story: Mom gets Dad to take the kids out to the darkest part of the woods in the dead of night and leave them stranded and alone. They eventually find a gingerbread house and … hell, you know the rest. Unlike the canonical fairy tale, this version of Hansel and Gretel never went home. As the burning headlines in the opening credits can attest (with woodcut illustrations moving across the screen in what looks like a 21st-century updating of Terry Gilliam’s animated work for Monty Python), they started hunting down and killing other witches. The implication is that they started doing this even before they came of age.

Anyway, back in the present (well, the 18th or 19th century, but you get the picture), we’re in the city of Aupsburg, where an overzealous sheriff (played by the King of Decadent Creepy, John Starmore) is on the verge of drowning an alleged witch named ‘Mina’ in a barrel of water.

Gretel politely asks him to cut it out before her trigger finger twitches on her gun, causing her to blow his brains out. She and Hansel have been hired by the town mayor to look into a series of disappearances of the local children. As suspected, there are witches behind it. However, what they don’t expect (but what the audience should if they don’t have a low alpha wave pattern) is that this case ties back in with their past.

Okay, since I want to end this review on a high note, let’s get the bad out of the way first.

Sadly, I’ve plenty to pick from. The gore is nice and bloody but completely detached from any sort of emotional resonance. It’s almost as if some producer were going through a checklist and making sure that this, this and this were on it. When the blood gets painted on the screen (which is frequently), you don’t really feel anything aside from the need to shrug your shoulders.

Characterizations are saucer-thin, at best. The dialogue is completely forgettable and occasionally more than a little silly (Sorry, but there are instances where adding the word ‘f***’ does not make you look tough, angry, or otherwise intimidating).

The best example of both can be found in Benjamin Wasser, a groupie of Hansel and Gretel’s with a complete scrapbook of their exploits. Anyone who remembers Ryan the Intern from this last season’s Grimm will understand why my thoughts when I first saw this kid were: “MUST. DIE.” Mina, who turns out to have a completely predictable secret of her own, is less annoying but little better. If it weren’t for the completely gratuitous skinny dip in the pond at the film’s midpoint (another spot on that producer’s checklist, no doubt), I wouldn’t remember her at all.

Hansel and Gretel function as little better than plot devices, themselves … and it’s their movie! Gemma Arterton’s Gretel is definitely the smarter one of the bunch, the one who always brings up strategy and figures out leads. Though she does get beat up and/or captured many times over the course of the film, she’s no shrinking violet. Biting into the nose of one of your captors is as badass as they come. Still, whatever internal life the plot and script suggests that Gretel has just never shows up in Arterton’s performance and that may be more the fault of the script than anything else.

Jeremy Renner’s Hansel, on the other hand, is a bit of a mindless thug, Pugsley Adams to Gretel’s Wednesday. By his own admission, all he cares about is killing every witch he can find and he is loutish enough to have Benjamin stand in front of him before a body explodes (don’t ask). Normally, I’m a big fan of Renner, but here, his affect is so low and lines so bad that his performance is nearly as nonexistent as Arterton’s.

However, Hansel does have one interesting side effect from his captivity in the Gingerbread 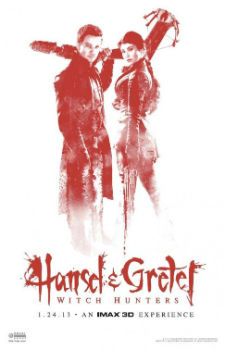 Witch’s house. Apparently, eating all that candy gave him some sort of diabetes, for which he needs regular injections every few hours (always marked by the primitive steampunk timer on his wrist). It is a nice believable touch that the script sadly bungles by completely forgetting about it for the middle act of the film, only to bring it back in a completely contrived manner during the final battle.

Okay, I think that I’ve beat this one up enough. I DID say that I wanted to end this on a high note, right? Here goes ….

Famke Janssen (who, before becoming known as Jean Grey of the X-Men series, established her villainess bonafides in Goldeneye and The Faculty) seems to be having the most fun as the Grand Witch that Hansel and Gretel are up against, combining nasty viciousness with an equally wicked sense of humor. John Starmore gives his supporting role the same sort of gusto, though he gets taken off the screen a little too quickly for my taste.

Whatever plot holes the film has (and there are a few contrived doozies along the way), it does something that more pretentious films of this stripe (the original Blade comes to mind) don’t normally do: Keep moving. The story of this film, wafer-thin though it can be at times, moves at the pace of a bullet train. You never have time to really catch your breath or think about how stupid this particular plot point was. With some films, that can actually add to the drag. In this one, I count that as a plus. As long as you’re hanging on tight, you’re always able to keep up.

The depiction of witches here is actually a nice little throwback for me. It brings to mind the film adaptation of Roald Dahl’s The Witches in terms of their preying upon children, the overall look for these walking nightmares, and their appropriately nasty attacks.

Of course, we’re also told about good witches here, a touch I’d have been fine with if they made it more a matter of choice than bloodline, and we’re introduced to a troll named ‘Edward’ (a reference to Edward Hyde?) who proves to be an unexpected ally for Gretel. Had my old partner Rhi seen this film, she would have wanted a pet Edward by the time she was done watching it.

Finally, there are the fights, which are surprisingly the most convincing and effective parts of the film. The cliché thing to do is depict Hansel and Gretel as being such badasses that they never get a scratch as they blow away the witches with their ridiculously anachronistic weaponry. Nothing could be further from the truth. More often than not, they are both getting the shit beat out of them by their opponents, including when Gretel gets jumped by the sheriff and a posse. All their experience, weapons and ability to deflect spells (Again, don’t ask) only give them a slight edge that is just enough to keep them alive but little else. So, every fight is a knockdown, drag-out affair where who comes out on top is never really certain. You never shake the feeling that Hansel and Gretel have gotten by just as much on luck as anything else. It’s also these parts of the film where you begin to realize how much the two of them depend on each other.

You’d be forgiven for thinking that you’d already seen this film back in the 2000s when they were calling it “Van Helsing.” I would argue that this is the film that Van Helsing should have been and ultimately wasn’t: the mindless-but-fun equivalent of an old-school pulp novel, complete with all the charms and pitfalls that designation implies. In a lot of ways, this film is the late-period Hammer flick, Captain Kronos: Vampire Hunter, injected with a good dose of amphetamines. I’m given to understand that a sequel is in the offing. Here’s to their getting the story and character development working a bit better on the second go-around.

You can buy Hansel & Gretel: Witch Hunters on Amazon.com.