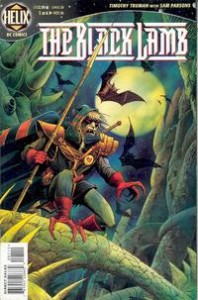 In any creative medium you care to name, the 1990s and early 2000s were the boom times for the vampire genre. No longer content to stay in the Transylvanian crypts of yesteryear (though you could catch the latest version of this with Francis Ford Coppola’s Bram Stoker’s Dracula and the latest installments of Nintendo’s Castlevania series), vampires spread out amongst the masses in new and unexpected ways. Georgia-based roleplaying game-makers, White Wolf, caught the zeitgeist of the resurgence with Vampire: The Masquerade. In cinema, adaptations of Anne Rice’s Interview With the Vampire and Queen of the Damned vied for box office gold, alongside the action-oriented Blade trilogy and the more sci-fi Underworld films (the latter being my personal favourite…probably because it stole so much from White Wolf that they had to sue the makers of the first film for copyright infringement). But there was one frontier that no mainstream vampire ever crossed into during this period: the future. In fact, there are only two times I can think of over the years where a vampire actually wound up in a classic sci-fi setting, as opposed to just a modern urban hunting ground that could be called “Highlander with fangs thrown in”. The first was an old episode of the Buck Rogers TV series (Yes, I’m that old…what of it?),and the other was a slightly less old Choose-Your-Own-Adventure book entitled ‘Space Vampire’.  Neither really did much with the idea except recycle the genre clichés that didn’t involve religion. More could have been done with it.

Thankfully, writer/artist Tim Truman, who has made a career out of portraying noble outsiders (If you can find a copy of the original collected DC comics miniseries, Hawkworld, grab it), agreed with me and made The Black Lamb as part of the Helix Comics experiment for DC.  If anything, he took the idea several steps beyond what most people would have thought of.

The opening sequence takes place in Eastern Europe during the late 18th century, courtesy of “the memoirs of Franz Murnau” (a nod to F.W. Murnau, director of the genre-defining Nosferatu). Within the space of three pages, Truman deconstructs the typical staking and killing of a group of vampires, and turns it into a metaphor for prejudice-driven genocide. The reader feels a shudder of horror at the slaughter that takes place, setting the stage for the section’s capper: “But alas…we were not alone in hearing those screams.” Cut to the outside of the tomb, to see an impressive, imposing figure of a vampire with blood-red eyes. A cloak and hood swallow most of his body, though strings of long, platinum-blond hair come out from under the hood. You see glimpses of a set of heavy leather armor, a broken heart symbol attached to the left breast.  His name is ‘Diarmaid Na Duibee’ or ‘Diarmaid Donn’, an Irish vampire cursed with immortality, due to the necessary sin of feeding from his vampiric daughter. For this crime, he is called the “Black Lamb” or the “Son of Death”.

We get more flashbacks to earlier times throughout the series (seeing the Lamb in colonial America and 16th Century Transylvania), but most of the action takes place in an unnamed megalopolis of the future. While readers of fantastic literature are no strangers to the so-called “urban jungle”, this setting is better categorized as an urban wilderness. Corporate steel towers reach ever higher towards the sky while the streets below are as dirty, graffiti-decorated, and desolate as any 20th century equivalent. Smoking and firearms have been outlawed by city ordinances and federal law, though both are largely ignored. Cults of mourners, decrying the cost of technology, gather at the massive mortuaries to mourn the dead whose bodies are now burned in massive incinerators. Retail magnate Sam Yonga (a cross between H. Ross Perot and Sam Walton, with emphasis on the folksy façade of both) continually runs for and loses the presidential election, and “celebrates” by having post-election sales at his Yonga Mart stores.  Meanwhile, deep in the shadows, the old ways and feuds of the monsters continue.

More than just vampires roam this landscape. Ancient clans of werewolves, fairies, a sewer creature with the body of a brute and the soul of a poet, and far stranger things flit in and out of the shadows. Most are organized under the auspices of the Court of Monsters, headed by Arbiter Skull, whose wrappings and decayed flesh suggest he is roughly the same age as the Pyramids of Giza. “Specialists”, whose expertise is in tracking and killing monsters, make frequent hunts, for reasons ranging from noble (in their eyes) to mercenary. The Court offers its protection to those of the Night Tribes that accept its authority…and the Black Lamb acts as the enforcer of its will.

Tim Truman’s storytelling is downright cinematic in nature. Oftentimes, the panels are close-ups of previous ones (like a camera zooming in) or a follow-up to the action in the previous panel (most frequently in the form of violence). The feeling of grime and dirt on nearly every part of the story makes readers feel like they could wipe their fingers across the page and get a layer of it on their hands. With only a couple of exceptions, this is a future that is far from antiseptic. It is a dystopia of have-nots scrambling to hang on to what they have left. This is especially true of most of the monsters. The visual design Truman brings to his characters is striking, indeed. Much as I love the Lamb’s overall design (including the claw feet that resemble a giant bird of prey’s), my favourite design of the bunch is the aforementioned, never-named sewer monster found in issue #4. The overall body is a massive Swamp Thing takeoff, but the face bears a striking resemblance to the poet Walt Whitman (whose shattered brain went into its creation). The gentleness in its face tempers the massive bulk that defines the rest of it.

As to the story, I’m of two minds about it. On the one hand, Truman succeeds in making his point about monsters-as-genocide-victims by twisting the old, accepted lore of the creatures. Yes, vampires live a long time and drink blood, but it is a condition they are born into. Only drinking vampire blood (a hideous crime) makes them immortal. Yes, werewolves can be injured and killed by silver, but it is only fatal to the young ones. Get enough centuries under your belt and you can survive “enough tinkleball to sink a Spanish galleon”. That all said, Truman also shows that there are predators among the Night Tribes, as oppression breeds oppression. He even throws in none other than Dracula himself (with heavy emphasis on the Vlad Tepes portions of his look and political savvy) as the final villain of the series.

On the other hand, the dialogue feels more than a bit off throughout the series. Mind you, it gets the job done, by and large, and certainly, no one is at a loss as to who a character is or what they are about. But any words outside the narrative boxes feel as flat and lifeless as a blood-drained corpse. There is one character, the werewolf Niceros, whose dialogue inflections feel wildly inconsistent throughout. Granted, he has been around for 900 years and survived the collapse of several cultures, which may account for some of the weird inconsistencies. But it is still unnecessarily jarring, especially considering he is a major character.

Is this still a good series to pick up? I would have to say, “Yes.” For all his comic’s faults, Truman still manages to craft a workman-like story of an oppressed people who manage to endure whatever their would-be killers care to throw at them. Given the long, tragic histories of the Native Americans, the Armenians and the Jews, it is only too easy to relate to their plight.