Imagine you’re standing around at a comfortable human temperature of 98 degrees. Maybe you’re looking at your work schedule for 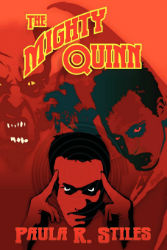 next week. You’re hanging out in an office. A ghastly chill ripples through the air. You look around for that jacket you haphazardly tossed on a chair. Out of the corner of your eye, you see a short, schleppy Canuck rush out that exit at the end of the dimly lit hall that was supposed to have been locked. The hall is now a tunnel of frost. The office door is a sheet of ice. You’re not looking for that jacket, anymore. After you’re revived from hypothermia in the hospital the next day, you learn that an investigation has been launched to find the cause of the sudden deep freeze that turned your entire office building into a slice of Mount Everest.

For your 411: Last night, you met Quinn Bolcan.

Quinn Bolcan, a small-time marijuana farmer from Vancouver, BC, goes on the run to Vermont to escape werewolf bikers after a SWAT bust. The last thing he was expecting to do was diffuse a nuclear bomb inside of a milk truck on the U.S./Canadian border. This inadvertent act of heroism makes Quinn a target for some brutal scientific, preternatural, and federal investigation.

Everyone wants to know: How did he do this? Quinn possesses a preternatural ability won from a sore loser at a poker game. A sore loser who happened to be a warlock. This display of bad sportsmanship gave Quinn Bolcan the ability to drain heat from any matter.

What makes The Mighty Quinn an unusual type of horror novel is that much of the horror is solely in the heads of the characters: paranoid suspicions about things that haven’t happened, but seem like they could have happened, and threatening fantasies from the antagonists that are looking forward to “decorating in blood.” This is a nice Hitchcockian technique: Most everything unpleasant is just suggestion and not actual gore or violence. Plus, as you’re reading, you’re so busy being misdirected by the violent thoughts of the antagonists, you’re more than ready for the comic relief of bristling, witty passages like a summation of employed women who have survived “banging their heads against a glass ceiling.” Comedy-horror is probably one of the most difficult genres to write effectively in a way that’s not bland or flat-out idiotic, but with a passage like: “Cops are notorious for being paranoid about Satanist wannabes. But they’re total virgins when it comes to any real black magic,” I think it’s clear that The Mighty Quinn has its intelligent comedic charm.

It’s necessary to have many characters in this story, but I found the rotating cast to be confusing at times, so I needed some re-reads. I have no complaints to lobby, though. Re-reading just gave me a clearer mental picture of little nuances of the story. One element of the story that also stood out for me is how much preternatural company Quinn has. He’s up to his urban neck in werewolves, necromancers, mummy dust, warlocks, fairies, and other specters lurking along roads best left untraveled. Compared to all of this, his ability to drain the heat from matter seems a bit inferior. However, think about this for a moment: He used this ability to diffuse a bomb that was about wipe out a chunk of the planet. All the fairy glamour and warlock magic on the books didn’t prognosticate or prevent this nuclear catastrophe. Quinn did. There’s definitely something to be said for Quinn’s ability to incite blistering cold: frostbite on sight, boiling coffee lulled to molecular sleep, and the possibility of absolute zero on Earth.

That last one is a particularly attractive speculation to me. If Quinn could lower something’s temperature to absolute zero, would its molecular motion cease altogether? Absolute zero is not enough to cease all molecular motion, entirely, but, with a human consciousness like Quinn’s instigating the temperature drop, it’s possible that he could will molecular motion to cease entirely. And if he did, what kind of ramifications would that spell for the rest of the planet?

Absolute zero is one of those “forbidden zone” terrains of scientific speculation. The temperature has never been generated on Earth. Researchers at MIT came close in 2003 by achieving an impressive temperature of 0.45 nK, (Absolute zero on the Kelvin scale is 0K, so 0.45nK is measured in the billionths of one Kelvin degree above absolute zero), but to date: No one knows with empiric certainty if molecular motion can completely cease at absolute zero or not. So, no one knows what would happen if absolute zero occurred on Earth. What if molecular motion really did completely cease? Would a sudden halt of molecular motion initiate a chemical freeze that deprived the entire planet of heat and turned it into something akin to a comet? That sounds weirdly appealing. This kind of sci-fi speculation is what makes The Mighty Quinn a book that’s fun for your mind, not just for your goose bumps.

Paula R. Stiles has a fresh ability to fuse real-life urban danger and cutting edge science with the murky occult paranoia of days long since past. She weaves folkloric archetypes with big-city sensibilities in a style that is unexpected, witty and slick. The Mighty Quinn keeps it real with references to real-life occult media like the 90s flick, The Craft, and the 70s horror classic, The Wicker Man. Little details like that are a plus because topical real-life references keep fantasy stories grounded.

The best fantasy stories are the ones that flow from the chaotic to the sublime. This quote, in particular, strikes resonance: “Nobody likes to be the scapegoat being sent out into the wilderness with everyone else’s sins on your head.” This is a fantasy novel, but this passage elicits real pain because Quinn won’t be able to lead an ordinary life. His ability allows him to save many lives, but also requires him to be alienated by many of the same lives he saved. He’s destined for the road less travelled: the one haunted by werewolves, fairies, bogies, wraiths, vampires, ghosts, and all eldritch things that go bump in the night. It’s on this note that The Mighty Quinn concludes its eerie finale.

You can buy The Mighty Quinn from Amazon.com.