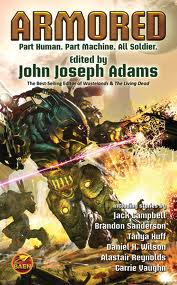 Titling an anthology ‘Armored’ offers about as much promise as anthologies titled ‘Guns’ or ‘Spaceships’ would. You could get a lot of variety, or you could get a lot of the same. Admittedly, at times, reading this book cover to cover, I approached the tedium point. But Adams is a smart-enough editor to break up the line of one tale of military combat after another – with the added chore of learning a whole new world, hero and foe each time – with stories you don’t expect in such an anthology. So, in the end, I can’t say the book as a whole bored me.

The inspiration for this project comes from Robert A. Heinlein’s Starship Troopers and John Steakley’s Armor, but powered combat armour shows up all over the place now in science fiction and comic books. Still, there is more variety here than you would expect from that heritage. The stories range from an alternate past to secret histories to the future. Sometimes, the hero is the person in the armour. Sometimes, it’s the armour itself. Sometimes, the armour is of the mecha kind. Sometimes, it’s as metaphorical as real, and the authors range from old-time pros to some making their debut here. Many put their actual military experience to good use.

Unfortunately for Innsmouth Free Press readers, I cannot report that anybody in these stories puts on power armour before storming R’lyeh or that space marines grapple with shoggoths. But some of these stories venture close to horror territory and use the idea that armour can be a prison as well as protection.

The hero of Alastair Reynolds’ “Trauma Pod” is sent on a recon mission to observe why the battle mechs on both sides of the war are disappearing and leaving the theater. When a brain injury gives him a distorted body image and he has to wait for evacuation inside a medical pod, with its supervising robot brain and the soothing telepresence of a doctor, the story starts to read like Greg Egan doing a war story. The Armor Assist software that manages the powered armour in Jack Campbell’s “Hel’s Half-Acre” not only gives lectures and drills in tactics and military law, but can also instantly execute a mutinous wearer. And, as the story progresses, we find out what else it’s capable of. Lauren Beukes also takes up the idea of armour-as-prison in “The Green”, a planet with a vicious ecosystem. Hired to collect potentially useful biological specimens for commercial exploitation by their corporate employers, some of the workers, including the protagonist’s lover, end up as zombies. It’s a memorable story marred a bit by the heroine’s slightly too-Dickensian childhood.

I have a soft spot for lethal, seemingly sentient, vegetation, so I enjoyed the setting of Simon R. Green’s “Find Heaven and Hell in the Smallest Things”. It favourably reminded me, in parts, of Harry Harrison’s Deathworld or Ursula K. Le Guin’s “Vaster Than Empires and More Slow”. But, even if you never read those, I think you’ll find this tale of convicts sentenced to help with a terraforming project on the planet Abaddon satisfying. It also comes with a fair number of allusions to Shakespeare and Jacobean drama.

Alternate history shows up in David D. Levine’s “The Last Days of the Kelly Gang”, where mere hammered steel plate is exchanged for something else at the Battle of Glenrowan. (This is not, incidentally, the first science fiction treatment of Australia’s famous outlaw Ned Kelly. That honour seems to belong to A. Bertram Chandler’s Kelly Country.) Carrie Vaughn’s “Don Quixote” is sort of a secret dieselpunk history, with two Spanish Republicans coming up with a new weapon in the last days of the Spanish Civil War.

Armour as a metaphor for a willful resistance and wariness to intimacy, as well as a physical artifact, is explored in two stories. First is the witty “Power Armor: A Love Story” by David Barr Kirtley. Its hero has invented a suit of invulnerable armour which, he knows, will protect him from the inevitable assassins who have followed him through time from a repressive future. One is the charming woman he has fallen in love with. But how to test her claim she has renounced her mission and is worthy of his trust without taking off the armour? It’s my favourite story in the book. Sean William’s “The N-Body Solution” has a man trying to get past the invulnerable armour of a woman. He spars with her, not to breach her physical armour, but to breach her silence on her secret past. But here, since both are post-humans, “man” and “woman” are loose terms. A further complication is that they seem to be stranded at a faulty node of an alien-built interstellar teleportation network. Williams’ story is one of the few in the book that offers an intrinsically interesting and developed setting, and not just a sketchy stage drop for the action, so it’s no surprise he’s used the same universe for other stories.

The “Field Test” of Michael Stackpole’s story involves the use of power armour during the U.S.’s recent intervention in Libya. “Jungle Walkers”, from David Klecha and Tobias S. Buckell, inverts the usual norm of the anthology. Its hero doesn’t wear armour, but has to, as part of a small unit of U.S. Marines, stop an armoured incursion into Columbia by Venezuela. He not only has to deal with the enemy but a superior officer rusty in combat skills and doctrine.

While the above stories were the ones I liked best, there were others that also violated expectations, but didn’t really work for me. “The Last Run of the Coppelia” from Genevieve Valentine had a bunch of ex-cons discovering a secret that political forces are willing to kill for and having to decide whether to risk their lives for justice or go for self-preservation. It was just a ho-hum story for me. Jack McDevitt’s “The Cat’s Pajama”, a puzzle story about how to effect a space rescue and featuring McDevitt’s series heroine Priscilla Hutchins in her student pilot days, bored me. Nor did I care for John Jackson Miller’s attempt at humour in “Human Error”, with its Surgical Assault Team, charged with fighting a giant space fungus, having to use alien armour in an emergency. However, I do admit to laughing once or twice at its English slang mélange from all sorts of wildly different times.

But there is also plenty here for readers wanting straight-up military science fiction. None of the following were my favourite stories, but I enjoyed all of them.

While I found Ian Douglas’ “The Johnson Manuever” a bit hard to get into, I appreciated its historical inspirations in the Boxer Rebellion and the U.S. Lebanese involvement circa 1983. David Sherman’s “Contained Vacuum” is set in his Starfist universe and has space marines investigating what seems to be a derelict spaceship. While I didn’t quite buy the smooth way the mixed-gender, mixed-species combat force of Tanya Huff’s “You Do What You Do” cooperates – an installment in her Confederation of Valor series, I did like its look at the problems its cybernetic warrior protagonist has in delinking from her usual powered armour and into a piece of mining equipment needed for an emergency escape. It also works as a look at the altruism that leads some to become warriors. Two stories feature paramilitary forces and the intimate relationships between sentient suits of armour and their occupants – and the problems of replacing those occupants when they die. Karin Lowachee’s “Nomad” is flawed by building its plot on the unconvincing premise that such an intimacy, when it becomes “love”, is a social taboo. That taboo starts its revenge plot in motion. Also having a revenge plot is Christie Yant’s “Transfer of Ownership”, a better, shorter treatment of many of the same themes as Lowachee’s piece.

Another version of machine-human intimacy is found in “Heuristic Algorithm and Reasoning Engine” from Ethan Skarstedt and Brandon Sanderson. Its titular character, ‘HARE’ for short, inhabits the circuitry of a suit of powered armour and is there to advise the soldier wearing it on standing orders and doctrine, as well as provide tactical updates. But it ends up learning, too, as it watches the heroic actions of its soldier, while he tries to protect aliens from a machine plague. Not only does this story seem to gain from the military experience of Skarstedt in conveying the chaos of combat, however ordered by cybernetic assistance, but the story has some interesting technological speculations on how landing armoured troops on an atmosphered world could be done. The enemies of the heroine in Wendy N. Wagner and Jak Wagner’s “Poachers” are more formidable than the title suggests, and this is another story which, on the level of technological extrapolation, does some interesting things with the notion of powered armour. Its heroine, a longtime inhabitant of Luna, has to constantly wear armour just to move around on Earth. Robert Buettner’s “Sticks and Stones” is a witty replay of an old Bible story. Its protagonist wants to do some good on a planet of primitive humans without interfering in their development. Dan Abnett’s “Death Reported of Last Surviving Veteran of the Great War” is more a character study than story. While the Great War is not WWI, there is a vibe from that war here. The first users of powered armour in this European war come to be regarded as something like the early combat aviators of that earlier conflict. However, there is also something a bit dated about this story in its imagining, not only that America would have the will and money to fight in a future European war, but that Time Magazine will still be a big thing in the future.

I even found something to like in “Helmet”, specifically, the narration in this fable-like story of tyranny in a future Africa. But I found some surprising and improbable gaps in technological and social logic from Daniel H. Wilson, an author with formal credentials in robotics.

So, in short, this one has enough good stories with enough variations on its central technological image to recommend to all science fiction readers, not just military sf fans.

You can buy Armored from Amazon.com.