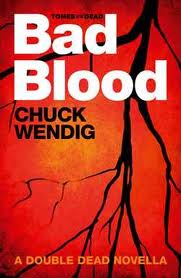 Bad Blood is the novella-length sequel to Chuck Wendig’s novel, Double Dead, the story of a vampire in the zombie apocalypse. Because it’s a sequel, this review contains some spoilers for Double Dead.

Bad Blood picks up not long after the events in Double Dead. Badass vampire Coburn has made his way to San Francisco in the hopes of finding a rumored CDC laboratory where he can help create a cure for the “rotter” scourge. Only Kayla’s father Gil and Creampuff, the terrier who should have been dessert, remain alive after the cross-country trek. Kayla manages, however, to make her presence felt despite being technically dead, residing now in Coburn’s very blood. Coburn finds Kayla both soothing, taking the edge off his blood cravings, and irritating, because she keeps rooting around in his head and digging up memories he’d rather leave forgotten.

In the last book, we encountered cannibals, juggalos and religious zealots. Bad Blood ups the ante by introducing two groups that are, amazingly, perhaps even more strange: zombie-eaters who devour rotten flesh and a gang of zombie-fighting children. I was disgusted by the zombie-eaters, but the gang of children definitely tugged at my heartstrings. In the final confrontation, however, it’s ultimately Coburn who must face the demons of his past alone – both psychologically and in the real world.

My only real complaint about Bad Blood is that it was too short at just over 100 pages on a Kindle ereader. I wanted more! Additionally, Kayla’s presence in Coburn’s mind makes him softer and more human, all at once more relatable and more loathsome because he now regrets the horrible things he has done. So, if you liked the cold-hearted bloodsucker from Double Dead, you might be disappointed in the softer side of Coburn you’ll see here. That is, however, the nature of character development, so, personally, I liked seeing a traditionally static character – an immortal, unchanging vampire – growing emotionally over the course of his story. Also, if you’re squeamish, I don’t recommend reading this book over lunch, as the zombies are extremely visceral, squelching and reeking and moaning enough to make even the most delicious sandwich seem unappetizing.

Ultimately, it’s Wendig’s writing that always impresses me the most in these novels. He’s become known for an acerbic wit and detailed, whisker-curling descriptions, and the reputation is well-deserved. He takes what should be overused tropes – vampires, zombies, cannibals, oh my! – and makes them leap off the page. My only disappointment is that Coburn’s story ends here. I asked Wendig at WorldCon whether he intended to write any more Coburn stories and the answer was unfortunately “No.” Smirking, Wendig assured me, however, that “Coburn will live on forever in my heart.”

If you read Double Dead and liked it, then I recommend Bad Blood. It’s not the neat wrap-up to Coburn’s story I had hoped for, but, in the end, I got more Coburn and more Creampuff, so I’m satisfied.

Bad Blood is available from Amazon.com.