[dropcap]M[/dropcap]anga can fall into two categories. It’s written for kids, or it’s written for kids and young adults. Bleach falls into the latter. Some manga translates very well and this one does, too, but not in the way you would think. The characters make this manga work better than some. In the manga universe, there are three prominent ones, at least according to popular magazine, Shonen Jump: Naruto, Bleach and One Piece. Bleach is the underdog when it comes to ratings, but that’s probably due to Bleach not having Sasuke Uchiha in it.

I have read the Bleach series of graphic novels before and enjoyed them – well, I suppose not all of them, but you can’t win them all. Tite Kubo’s previous manga, Zombie Powder, was his comic debut and failed in many ways in plot, characters and story – though, if you looked closely, you could see some of the characters resembled the ones he would later use in Bleach. These were the building blocks for a manga that would later become a successful long-running anime series.

Bleach revolves around character Ichigo Kurosaki, who can see ghosts and is pursued by a creature, called a “Hollow,” that tries to eat his two sisters, leaving him no choice but to become a Soul Reaper, thanks to Rukia Kuchiki giving him all her power. Ichigo is nicknamed ‘strawberry,’ because that’s what ‘Ichigo‘ means, and that’s the end of the translation lesson, folks. He is a red-headed, confident and, at times, cocky kid who goes to Karakura High School and uses his might to help others who can’t help themselves. He has friends in Chad, Orihime and Totsuki, who constantly get in his way, but mean well when he goes into his dark moods, from time to time.

In Volume 47, there are several stories going on at the same time. Lieutenant Izuru Kira looks on in horror as Lieutenant Matsumoto heads to confront former Captain Ichimaru, who has recently left the Soul Society, along with Captain Aizen and Captain Tozen. He knows she’s heading for a dangerous encounter, but he is powerless to stop her, since she is so headstrong.

Gin Ichimaru is busy teasing Ichigo about being weak and unable to beat Aizen in his current state, even if he tries. According to him, he was much scarier when he was younger, but then, he hasn’t seen Ichigo in his vasto lorde form, yet. This is a bit futile, since he is the hero and unlikely to turn coward on the main antagonist in the series, yet I couldn’t blame him. Aizen has been looking a bit weird, lately. In this volume, he’s all head-to-toe in white, looking like a Soul Reaper condom. At this point, the whole story gets surreal, as Gin attempts to completely shatter Ichigo’s resolve, while Aizen poses for a Mr. May calendar shot on Page 42 and, on another page, his head resembles a broken gum ball.

Gin is Aizen’s right-hand man, along with Tozen, and the story has hinted that Matsumoto had deep feelings for him when they were younger. Her love is unrequited, though, as she thinks that if Gin had loved her, he wouldn’t have left the Soul Society in the first place.

Bleach is an interesting, if teasing, read. Its best bits are full of humour, like Ichigo’s dad, Ishin whacking him one for not concentrating on being at one with his sword. I took in all the humour, and the sadness of Ichigo toying with fighting Aizen, and enjoyed it. It does have curious disaster moments, though, where Ichigo feels despair at Urahara, Ishin and Yoruichi lying on the floor, defeated. Gin’s statement that they could not defeat Aizen is his way of testing how powerful Ichigo really is. How could Ichigo save the day like the hero he is supposed to be?

Gin does have a point and this despair is what separates standard American comics from Japanese ones. In this manga’s case, even the hero might not be able to do a thing in the face of adversity and the adversary in this case comes in a white dress, with a hole in his chest. Over the past 46 volumes, Aizen has become one of the strongest of the baddies in most Japanese comics who just keep getting stronger. This book, in my mind, was impossible to put down. There is a lot to like about this manga.

Those who have been reading this from the beginning will know about Ichigo’s sword guardian, old man Zangetsu. In here, he has changed 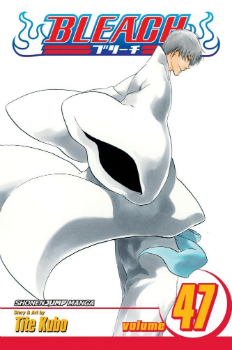 from being Ichigo’s white Hollow form that is called “Ichigo” backwards. Now he is Tensa Zangetsu, a form that looks a cross between Ichigo with dark hair and Rukia. This is all due to Ichigo’s rigorous training with former Captain Urahara, Yoruichi Shihoin and, later, Shinji Hirako. These alter egos are the product of that training and it’s no wonder he’s confused. Readers may like the way the story has developed from those early volumes. I know I did.

So far, Ichigo has been able to keep his friends out of danger and unaware of his antics as a Substitute Soul Reaper, but that is no longer the case. Totsuki, Keigo, Chizuru, and friends have been put in more peril than they thought imaginable. This is where one of those comical moments I mentioned earlier comes in. Fro Man, as Keigo calls him, tries to stand up to Aizen, even though he’s a Soul Reaper Lieutenant. It’s laughable watching his attempt, and Ichigo’s friends throwing bottles at him and trying to blow him up. But what nearly spoils the entire volume is the sight of Don Kanonji making a cameo appearance at a crucial point in the Bleach series that is supposed to be taken seriously. Just think of Jar Jar Binks in Star Wars: Episode 1 and you won’t go far wrong. Don’s appearance turns it into a bit of a farce at the end.

This said, one of the more unnerving parts of the Bleach manga is Aizen’s continual transformation from Soul Reaper captain to unusual character who has more costume changes than Lady Gaga. For fans of the series, Volume 47 answers a lot of questions about Ichigo’s Zanpakuto and also, how much his friends are willing to help him out when it comes to defeating Aizen.

Tite Kubo’s art is simplistic-yet-effective, dynamic and, at times, comical. Take, for instance, the panels. Occasionally, Tite will do a small doodle at the right hand page that isn’t a doodle in the normal sense. It’s Tite’s way of preparing the reader for what will be coming next in the manga. I liked how he interprets Gin as a snake, Aizen as a shape with long hair, and Matsumoto as a cat.

The art is well-thought-out and contains many different angles of looking at the characters. The characters themselves are all eyes and chins, but they aren’t offensive to look at, like some manga I could mention. It’s not just a case of characters fighting bad guys – everyone has a go at fighting them. Bleach is not the kind of manga that give its main character a monopoly on panel time throughout the novels.

Tite, this time around, has left enough of a cliffhanger at the end to warrant your getting the next volume. The only problem I had was with Don Kanonji making an unwanted appearance and Ichigo’s friends throwing bottles at Aizen. This only serves to make him look ineffective as a main villain, where the comedy didn’t quite work. Since this scenario happened at the end of the novel, readers might not want to get the next book, based on this. I think it is purely up to you – if you like serious manga, it’s not for you, but if you like a lot of fooling around with main characters, then buy it, by all means. The rest of the novel more than makes up for it.