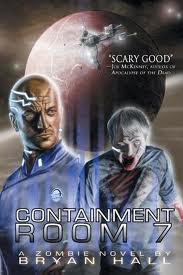 Not long ago, I finally picked up a copy of Dead Space 2. I had been playing the game for a week and a half when the synopsis for Containment Room 7 caught my eye: A strange object is brought aboard a deep-space research vessel, inspiring both worship and madness amongst the crew, leading to multiple murders. Survivors need to contend with a ruthless cult, the hungry undead, and the “rapidly evolving creature in containment room 7.”

Suffice it to say, I read this e-novella with my plasma cutter close at hand (the one covered with kitten stickers). I found myself astonished that, while Containment Room 7 shared thematic elements with Dead Space, the story was closer akin to a traditional zombie story (albeit one with Space Zombies).

The story focuses on Wilson, security chief for Deep-space Atomic Research Craft 12; his lieutenant and tepid love interest Cosette; and biologist Lisa Michaels; with passing attention given to a host of other security and science crew members. While orbiting a black hole and researching the possible discovery of a hypothesised white hole, the ship’s crew recovers a rock, ejected from the deep space anomaly, which seems to contain organic matter. From there, it all devolves into voices in people’s heads, promises in alien whispers, mass murders, and a quickly rising zombie horde.

There was a recurrent period while reading this story when I tried to decide whether it was amazing or terrible. Anyone who frequently watches “Syfy Channel Original Movies” should know the feeling. Appropriately enough, there were times when I got the impression that, with Containment Room 7, Bryan Hall would rather have been writing a script for a movie or video game. Hall made a decent effort to capture the mood of a sci-fi zombie flick, but sadly, he failed to incorporate the charm that makes certain titles stand out from the pack. I once heard the rise of the zombie genre hailed as the death of originality. Since the walking dead is a favourite trope amongst horror fans, innovation has become utterly crucial to breathing new life into the undead. Even George Romero, the ground floor of the zombie movement, spiced up his works with political and social commentary. The only fresh thing I encountered in Containment Room 7 was the weapons used by security aboard the DARC 12: descendants of the semi-automatic handgun that fire ball-bearing-sized bullets, which emit an electric pulse to stun the target. While seemingly so simple, this little piece of sci-fi tech (oddly enough, the only futuristic gadget prominently featured besides the starship itself) charmed me. The fact that this weapon, designed for subduing living suspects, could only slow down the zombified crew members helped to emphasise the desperation of the survivors. It also turned the “shoot them in the head” strategy on its…well, on its head by making the ammunition too small to inflict significant cranial damage. When the action hero protagonist needs to pump three shots directly into the back of a zombie’s skull to put it down, you know the survivors are in trouble.

Nevertheless, the lack of personality in this story was a letdown. There is one deficiency in Containment Room 7 that best characterises my disappointment: setting. In fiction, particularly science fiction and horror, special consideration is needed for setting. It is crucial, if not essential, to give the setting as much development as any of the characters in the story. The DARC 12 leaves much to be desired on this front.

For starters, the ship’s lackluster name, ‘Deep-space Atomic Research Craft 12’, epitomises this flaw. When I used to play Battlefleet Gothic, naming my ships and squadrons was part of the game’s fun. A distinctive name embodies the crew’s special connection to the vessel as home, workplace, and protector; in fiction, this connection extends to the reader. The Millennium Falcon would not be so memorable if it had been called “Corellian Freighter YT-1300”.

The name, however, is merely the tip of the iceberg-sized ship and is indicative of a greater issue. In deep-space science fiction, describing the spaceship serves multiple purposes: developing the setting, mood, and universe. Consider the various ships of the Star Trek franchise and how they characterise their cultures without any dialogue or exposition. A Federation Galaxy-class ship is bright, spacious, and comfortable; a Klingon Bird-of-Prey is spartan and utilitarian; a Romulan Warbird is imperious and imposing; a Borg cube/sphere is industrial and alien. While Hall establishes concrete floorplans for hallways to facilitate the action, he misses an opportunity to characterise his novel’s universe by not describing the architecture of the ship beyond saying where an elevator or window was present.

Furthermore, and most grievous of all, without properly developing the DARC 12 as a setting, a large blank spot is left in the novel’s atmosphere. Once more, the decor of a Federation ship in Star Trek reflects the optimism and enthusiasm of Roddenberry’s science fiction. The massive baroque and gothic architecture of the Imperium ships in Warhammer 40,000 represents the inhuman scale of their setting. The Space Shuttles operated for 30 years and were considered venerable technology when they were retired (Think of the people you know who gnash their teeth when waiting 18 months for an new iPhone). Warhammer spaceships take decades to construct, serve for hundreds or thousands of years, and entire generations of nameless crew work and die aboard them – thus establishing the grim tone of a universe where life is expendable, but technology is not.

Finally, please remember the Nostromo from Alien and the U.S.G. Ishimura from Dead Space, which are both landmarks for deep-space horror. Cramped, claustrophobic, and dimly lit, these vessels are living, breathing elements of their stories’ fright factor. After all, the ship acts as a replacement for the haunted house and the vast void outside answers why the protagonists simply cannot “leave the house.”

A coworker of mine once provided some very apt advice on storytelling: Don’t leave your characters and action floating in a bubble. A zombie simply isn’t scary enough on its own, even if it’s an outer space zombie. The creature needs a richly described setting in which to stalk, lurk, hunt, groan, and devour the hapless.

I feel the bungling of the setting best demonstrates the lack of the unique touches that can make a good title become great. At the very least, such pieces of flair can turn an otherwise horrible work into an enjoyable experience (for example, the jetliner scene from Megashark vs. Giant Octopus). The simple diagnosis is that Containment Room 7 is too much of a standard, albeit solid, zombie story.

Nevertheless, there were several stylistic choices Hall made when writing this e-book that left a positive impact. Rather than focusing on one character, Hall created an ensemble plot, with a few characters taking particular prominence. In many cases, this can result in an unfocused, unwieldy and confusing story, yet Hall managed to make it work as a tool to introduce various plot elements. Furthermore, I genuinely liked several of Hall’s characters. If the audience doesn’t like the characters, why should they care if they live or die? That is a flaw exhibited by too many horror titles these days. Lisa’s reminiscences of growing up in Philly (Perhaps I’m sentimental for a local girl), Wilson’s gritty police background from Chicago (cliche but strong), and Cosette’s relationships with her coworkers made these characters vivid enough that, as a reader, I legitimately fretted whether they would survive. Fostering a relationship between readers and characters is the cornerstone of tension and suspense, and it stands as one of the strengths of Hall’s story.

The ending, however, bears special mention. I hate ruining surprises, so you won’t get any spoilers here. Nevertheless, I honestly did not anticipate the ending that Hall delivered and catching your audience off guard is a precious horror technique. The questions Hall left unanswered were impressive, especially since so many horror and science-fiction writers find themselves compelled to explain every little detail at the expense of mystery and wonder. I found myself thinking about the novella’s ending days after I finished reading because it sincerely spooked me.

Diehard zombie fans are going to want to explore Containment Room 7. Readers who are jaded, cynical, or simply looking for something fresh probably will not enjoy the novella as much. Nevertheless, while lacking extravagant or unique flourishes, this story was a genuinely enjoyable read and earns my recommendation. Please consider buying this ticket for the next DARC mission and rediscover the horrors of deep space.

You can buy Containment Room 7 from Amazon.com.