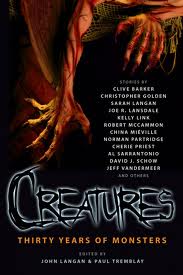 Whenever you’re reviewing a book like Creatures, you’ve always got to approach it from two angles. First, there’s the same angle you approach any book from. Did it work for me? Was it good? Second, you have to look at whether or not it succeeds at its stated purpose. In the case of Creatures, that stated purpose is to showcase “Thirty Years of Monsters” in fiction. Before I set about tackling either of those angles, though, let me just say that I’m a big fan of monsters. It’s right there in my bio, in fact. And so, I was very excited about this book which was, in many ways, made for me.

So, to get back to those two angles I mentioned, does the book disappoint? The answer is a resounding “no” on both counts. It’s a solid collection, full of stories that range from good to great, and it shows a sharp editorial vision in its four sections (complete with insightful introductions) that are at once a little campy and still thematically rich, just like monsters, themselves.

As for how well it represents the past thirty years of monster fiction, I’d say pretty darned well. There’s maybe a preponderance of stories from the last decade, but they’re balanced out by a few well-chosen classics from years gone by. “Rawhead Rex” may not be my favourite Clive Barker story, but it’s a perfect one for this anthology, and the same is true of Norman Partridge’s “The Hollow Man” or Joe R. Lansdale’s humorous “Godzilla’s Twelve-Step Program”. Nor is it unreasonable to say that the more-modern stories in this collection will probably be looked back on as classics in coming years, such as Nathan Ballingrud’s Shirley Jackson Award-winning “The Monsters of Heaven”. The table of contents is a Who’s Who of great contemporary genre writers, with stories from Jeff VanderMeer, Laird Barron, Kelly Link, Stephen Graham Jones, China Mieville, Michael Kelly, Gemma Files, and many others. While most of the stories in Creatures are reprints, a couple are original to the anthology, including Nadia Bulkin’s excellent “Absolute Zero”, which closes out the book. I’ve so far intentionally neglected to mention Cherie Priest’s “Wishbones”, because it might be my favourite story from a book full of wonderful stories.

Though there are monsters in Creatures that will be familiar to you, there aren’t any vampires or werewolves or zombies, and you won’t really find any particularly Lovecraftian beasties in these pages (depending on how loose your definition of “Lovecraftian” gets). Basically, anything that might already have its own anthology somewhere else isn’t covered here. These monsters tend to often be a little stranger, a little harder to define, and it’s really, really nice to see them front-and-center in their own anthology, especially one as great as this one.