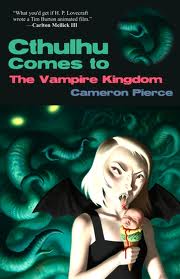 We open with the vampires Franz and Lola, and the death of their child. From there, we zoom out with brusque chapters and myriad perspective shifts to see the vampire world’s growing crisis. The vampires, you see, are running out of blood. Numerous, desperate solutions have been proposed, and the idea of fleeing to the underground grows more and more tempting. Those looking to save the planet, though, have one last idea: They want to summon Cthulhu. From that, you can no doubt tell a lot about the book to come. Cthulhu Comes to the Vampire Kingdom opens by throwing as many balls in the air as it can. It then proceeds to carve up each and every one of them, and reassemble them in innumerable and absurd combinations. Above all, Cthulhu Comes to the Vampire Kingdom is weird as all hell.

That weirdness can serve to undermine the more traditional elements of Pierce’s narrative.

The sheer number of characters, the short chapters, and the rapid switches between them leave Pierce’s characters more memorable than deep. There are individual scenes where Pierce very slightly draws back on the acceleration and allows you a closer grip on the characters, the most effective of which has Cyrus and his two friends reflecting on how their lives will end with the blood ceremony to come. But the book’s frenetic pacing prevents any close – or, at least, any lasting – connection with its characters. Scant pages after that aforementioned moment of reflection, so much has happened that the moment’s left buried beneath bloody battles, summoned monstrosities, and unicorn-themed Necronomicons. Each character has a core emotion or facet of their character that is carried through – Franz and Lola, for instance, are deeply in love with one another and not picky about what must be done to allow them to stay close – but everything else about them is mutable enough to be twisted for maximum oddity in each scene. Without any close characterisation to hold onto, the reader’s more along for the ride than invested in any of its players, and I can’t say that I cared all that much whether the vampire world was saved or not, so long as it was done with maximum spectacle.

I suppose the word “spectacle” there might have sounded rather dismissive, and I suppose it might have been to some extent, but the sheer and wonderful weirdness of Pierce should never be discounted. Calling Cthulhu Comes to the Vampire Kingdom “bizarre” is utterly insufficient, for this book is too endlessly inventive, too madly playful, and too gleefully schizophrenic to be summed up by any one word, no matter how well-intentioned it might be. A girl who is always aflame, a diner under the sea, an elder god with an obsession for lolcats, vampire teens rocking out to Bathory’s Blood on Ice, and chapter titles like “Sushi from the Stars” and “Boohoo, Everybody Dies” can all be found here, and all of that’s barely scratching the surface. Just about every page is filled with the spawn of a delightfully mad dreamer.

That inventiveness is augmented by continual shifts in tone that serve to leave the reader perpetually reeling. Chapters of earnest emotion will, here, reach climaxes of shock horror and the grotesque, and the most brutal of scenes will end with an innocuous cultural reference or text message. Pierce’s prose through all this is clear enough to give you some anchor in the strange seas you are sailing upon, but that’s not to say that he refrains entirely from wordplay. One of his most amusing habits is following metaphors and other comparisons to their logical conclusions, ending in wholly earnest and wholly absurd statements:

Amidst the madcap fun that he creates, Pierce does occasionally hone in on deeper moments. Environmentalism and its opponents are both satirised here. The apathetic: “…believed that technology would solve the crisis. They placed all their hope for the future in science. Most vampires had given up trying to be better vampires” (p. 12). Meanwhile, the environmentalists themselves rate the planet’s survival above their own and, so, enlist Cthulhu to purge the world of their world-wrecking species. These bits, though, are not indicative of the work as a whole at all. Pierce’s running, scattershot approach allows him to poke at and raise interesting points and questions, but it doesn’t allow him to slow down and actually treat them in any significant depth.

Cthulhu Comes to the Vampire Kingdom is, unsurprisingly, not the most orthodox of Lovecraftiana. Reading the book, I thought it was clear that Pierce is extremely familiar with Lovecraft’s work. References abound, including the ship S.S. Dunsany, the mad sea wolf Abdul Al-Blahblahblah, and the shop Pickman’s Costume Emporium. There are, furthermore, a few nods to the cosmic futility at the core of Lovecraft’s oeuvre, though those may owe as much to the malignant-universe view of someone like Thomas Ligotti as they do to Lovecraft’s indifferentism. One character dies “with a smile on his face, relieved to be through with the suffering of the flesh” (p. 59). Another “saw into the future and realized there’s nothing more to life, so he stopped breathing and danced into the blackness of his own mind” (p. 10).

Ultimately, though, both the references and the thematic connections to Lovecraft are nowhere near the soul of the work, but just another aspect of its shifting strangeness, and Lovecraft’s most dignified creations are cheerfully violated for comedic effect. Our first introduction to Cthulhu comes in an underwater diner. The waitress, evidently as surprised as we would be in her situation, informs the eldritch god that he is “supposed to be dreaming” (P. 19). Cthulhu responds with a shrug and an: “I got hungry. […] I have dreamed of this hamburger for eons” (p. 19).

Cthulhu Comes to the Vampire Kingdom is a bizarre ride that reinvents itself with every third paragraph, leaving the reader stunned, confused and more than a bit thrilled. The sheer weight of its bizarreness prevents its plot, characters, or themes from ever being particularly developed, but its short and goody-packed enough to never grow old and to keep dragging the reader on out of a need to see what insane thing Pierce has in store for you next.

You can buy Cthulhu Comes to the Vampire Kingdom on Amazon.com.