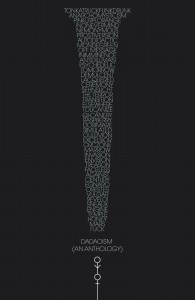 Weird fiction, as a viable sub-genre, or potentially even a genre in its own right, has a great deal to recommend it. It’s not everyone’s cup of tea (But then, what genre can ever really claim that it is?), but for those who are willing to come to a story with an open mind, and ready to enjoy whatever crazy shit is flung their way, Weird fiction is well worth the investment of time.

Now, I am not saying that Dadaoism (An Anthology), is “Weird” fiction, per se. Because it is not. The anthology purposefully rejects labeling. It is, however, close enough in this case that I think we can safely get away with applying the genre nomenclature. And Dadaoism is definitely worth your time.

Edited by Justin Isis and Quentin S. Crisp, it’s also a quite reasonably priced book, given the high volume of work (26 stories) it contains. The fact that the anthology was put out by Chômu Press – who have been having an excellent run of quality productions and content since they started up back in 2010 – doesn’t exactly hurt, either.

I was debating doing a story-by-story analysis for Dadaoism, but it occurred to me that this anthology is one that is very much going to speak to each reader differently, so I’m not going to ruin that experience for those of you who pick up the book – and you should; you absolutely should – by going through every story.

Although that’s not going to stop me from highlighting some of my favorites.

At the top of that list is Justin Isis’ “M-Funk Vs. The Futuregions of Inverse Funkativity.” Yes, that is the actual title. Moving through alternate past/present/future history, Isis’ tale is as much deranged space opera as it is anything else, covering, as it does, temporal meddling, reality shaping, and some decidedly recognizable historical figures who are lampooned to the hilt – and that’s just the beginning. Isis’ story is a damn good time. Though the piece is not a short one, I found myself loathe to leave it, wishing, when the tale had concluded, for there to be far, far more of this tale.

And though I found myself drawn largely to the softer, more introspective stories in the mix, another of the madcap pieces has to be mentioned first: Julie Sokolow’s “The Lobster Kaleidoscope.” In wordplay reminiscent of the high bar set by Brian Aldiss’ “Poor Little Warrior,” Sokolow charts a story that is deliciously absurd. And, really, if wordplay can’t lead to metamorphosis, fast food/seafood, and seafood dining philosophy and soul-searching/soul-mate searching, terra/aquatic relations and terra/aquatic inter-(and/or trans-)species love, why even bother?

Unlike the more high-octane pieces mentioned above, which are worlds unto themselves, many of the softer pieces I am drawn to seem to share an expression of the relationship between art and artist. Though, in an anthology like Dadaoism, this refers to stories that are rather more literal about the intersection of the creation and the creator, or the interpreter, than the oft-overworked, and somewhat biopic, and/or venting, tale of sad artists going through their (self-imposed) misery in “Oh! Woe is me, this poor, benighted soul deserving of pity, for none doth understand my plight!” posturing – which, incidentally (and completely out of context, I grant you), John Shirley should be lauded for nailing to the fucking wall in his stellar send-up, “You Blundering Idiot, You Fucking Failed to Kill Me Again.” (Which appeared in John Shirley’s collection, In Extremis, and not in this anthology – apologies for any confusion on that score.) Clearly, as evidenced by my diatribe, this is a sore point for me – submissions editing for any length of time will do that for you. However, unlike the stories I have just railed against, the writers of the stories in Dadaoism that chart the often-troubled waters of the liminal lines bisecting or delineating the real and the unreal have managed to create wonder, not angst.

This is, arguably, the best approach to this kind of story. It yields simple, yet beautiful (and haunting), tales like Katherine Khorey’s “Autumn Jewel,” which is a story about how we deal with loss and the ways our grief can manifest – in this case, as an assuaging, memento mori evocation born of a very personal, and personally invested, piece of fiction, of the kind that forces us to recall the best of what has passed and carry it with us. I am also likely drawn to Khorey’s tale specifically because it is a tragedy that, while it does not shy away from that nor attempt to be anything other, is full to bursting with the notion that we move on by remembering and celebrating what is gone.

The intersection of art and artist, of the real and unreal, also works beautifully, though in a different context, in Peter Gilbert’s “Body Poem,” which has as much to do with the transitory nature of art as it does with the simultaneously base and ecstatic act of creation. Gilbert’s story is the exploration of a life told via the narration (as written lecture) of a scholar with a not-so-tangential tie to the artist, exploring the way in which we speak about and approach art, and how movements are formed or shaped in the moment. Gilbert’s story also literalizes the act of art imprinting on both its subjects and those who experience it second-hand, as well as directly asking readers to go forth and create. To be inspired.

The interplay of art and artist, of audience and those who are at once part of and distanced from the artist, is handled in a subtler fashion in “Koda Kumi” – which is apparently a Justin Isis “remix” of Quentin S. Crisp’s “Italianetto.” I confess I do not know how much this piece truly differs from Crisp’s “Italianetto,” since I have not yet had a chance to read Crisp’s original, though I should very much like to. I have, in the past, found Crisp’s work to be excellent. And here, too, where I am unsure how much of the text is Isis and how much Crisp, there is a gentle, undine beauty to a tale that is very much about how our pasts shape us and the things we take away from those formative moments. “Koda Kumi” is, ultimately, a story about the ways in which we inform our own lives, and how others intersect and shape those decisions. It is about how we choose to remember the world and what it gave us. How we define the beauty of our past, and what those experiences are still giving to us. And what we also lose as we move further upstream is reflected in the piece’s bleaker, more final note at its close.

There are also works that I care for greatly in this collection which have nothing to do with the foregoing dichotomy of the intersection of art and the artist, of the real and the unreal. I love Megan Lee Beals’ “Poppies” for the transformative, metamorphosis-run-wild future extrapolation it evokes, and the vistas it paints through small glimpses and intimate renderings of a world not-so-terribly implausible. I also love it because it is a story of loss and recovery in the face of a world and a populace that is a stratified system of organic tabulae rasae; a story of simple, painful beauty in the face of madness and change so brutal that it sweeps away identity. It is about burgeoning, and moving past horror; of coming out of agnosia to reclaim gnosis.

So, too, do I love deceptively simple and evocative tales like Kristine Ong Muslim’s “Nowhere Room,” which is a language and narrative unto itself in simple, brief and undeniably pithy prose. And to tales like Colin Insole’s “The Houses Among the Trees,” which is ostensibly about isolation, but is, in truth, about so much more – from our individual and communal interpretation of the world to the things left unspoken by agreement and social pact, to discovery of one’s place (or, potentially, lack thereof – either forced or by choice) in the society in which one, purportedly, exists. It is about how we vanish, from plain sight and from “community”, such as it is, to become part of a sub rosa community of seekers, the lost and those still, and ever, seeking – if, indeed, we ever find a place at all.

For all that I love about this collection, in the end, there are pieces that I might take objection to. But they are my objections. They are personal objections. I know why these specific stories do not speak to me and I know why they will speak very distinctly, and with urgency, to others, so I will not malign anything here, principally because this anthology is very much about how each of us interprets the body of its work. It is a highly personal experience, perhaps moreso than many anthologies that form a unified theme or interpretation. Dadaoism is not seeking to present a statement. Instead, it is a direct offering to the reader.

As Gilbert’s story asks of its readers, so, too, does the whole of Dadaoism make a request of you: Read, imbibe, then go forth and be inspired.

You can buy Dadaoism from the publisher or Amazon.com.