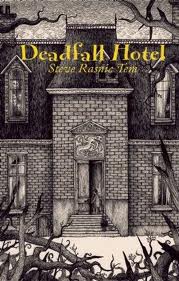 Before I talk about Steve Rasnic Tem’s Deadfall Hotel, let me talk a little bit about John Kenn Mortensen. Mortensen is a Danish artist whose work took at least one small corner of the Internet by storm. Basically, he draws amazing, Richard Gorey-esque pictures of monsters and other weirdness onto Post-It notes. You can see why I love him. He’s rapidly become one of my favourite artists, even though I know almost nothing about him. So, when I heard about Deadfall Hotel, his art was the first draw for me.

Sadly, the version I was sent to review wasn’t the lavishly illustrated Centipede Press edition, but the Solaris paperback with its John Kenn cover is still a more-than-usually attractive tome and the title design complements the artwork very well.

So, that’s the “judging-a-book-by-its-cover” portion of this review. Prior to picking up Deadfall Hotel, I was mostly familiar with Steve Rasnic Tem through reputation more than actual experience, though I’d read a few of his stories here and there, and knew that he was considered a formidable talent. The basic premise of Deadfall Hotel – that of a hotel where nightmares and monsters go on vacation – was certainly intriguing to me, as were the comparisons to Ray Bradbury, Edward Gorey and Shirley Jackson (quite a trio).

The book follows Richard Carter and his daughter Serena as he takes a job as manager of the titular hotel. The managers of the hotel are selected by some inscrutable method, but “tend to be men and women who have experienced terrible trauma in their lives.” For Richard Carter, this trauma takes the form of his recent loss of his wife to a fire and, for all the creepy atmosphere and weird events that befall our protagonists, it’s really this trauma, and the grief and other feelings that trail in its wake, with which the novel is preoccupied.

The story is told through a series of interconnected short stories, linking via the lives of our main characters. They feature many familiar tropes of the horror genre. A werewolf, perhaps, a vampire almost certainly, and even the King of the Cats, but none of them ever quite as expected. Certainly, you could never say of them, “It was only a werewolf.”  The dreamy, languid quality of the narrative sometimes heightens, and sometimes obfuscates, the menace of the supernatural obstacles that the characters face, or become entwined in, but it always helps to make clear that the delineations between us and these creatures are shadowy and uncertain, that clear knowledge of anything is hard to come by, and often harder to hold on to.

These interconnected stories help keep the story fresh and interesting, but they also provide some of the only room for complaints I had while reading. The pacing of the book is unusual. Since each of the stories could almost stand alone, the feeling that the book is building to anything is often lost. And, indeed, things are at their most apocalyptic during the middle of the book, in the section called “The King of the Cats”, which might have been my favourite part, though it might not be for hardcore cat lovers. (I am, myself, a fan of cats, to be sure, but of perhaps more measured ardour.)

The resolution of the book comes as it must, and it’s even satisfying in its way, but there are often moments in the book when the crashing cymbals of the previous scene’s events seem jarring and discordant in the quiet of the next scene. But these are small complaints. Really, Deadfall Hotel is a very pleasant book, itself much like I imagine a stay at the titular establishment might be. Not always clear or easy to understand, not always happening in the way you might expect, but certainly a deviation, a venture away from the norm, and probably one that you’ll come away from feeling better for it. Though it may be more infatuated with the melancholy of its premise than the magic, there’s nothing wrong with that.