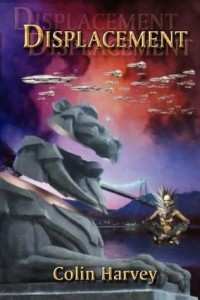 Displacement is a science fiction anthology by Cornish author and editor Colin Harvey. Unlike the previous Harvey-edited anthology from Swimming Kangaroo Press that we reviewed, Future Bristol, this is a single-author collection with no overarching focus like Future Bristol‘s municipal theme. It is also shorter, with fewer stories, though these range more broadly over space. The one big connection between them? They all fall under some aspect of film noir.

The first and longest story, title novella “Displacement”, is set in a future Vancouver that has a large population of immigrant aliens, the Lenden. A Chinese-Canadian homicide detective (reflecting Greater Vancouver’s large Asian population) investigates the murder of a Lenden. He soon discovers that this is one of several such deaths, possibly indicating a serial killer. But is there only one killer and, if so, is that killer (or killers) human or Lenden?

“Displacement” feels like a sci-fi homage to Canadian cop shows from Night Heat to Cold Squad to Da Vinci’s Inquest. The characters are a bit flat and stock, and some of the scenes feel lifted straight out of one of the aforementioned shows. But there’s also a lot of attention to detail in how a few decades and one alien non-invasion might change the city. This is a solid future detective story.

“A Sea of Grass”, one of two reprints in the anthology, takes the action right off planet and into the distant future. On a colony where Viking-like humans hunt mammoths to stay in touch with nature, one man is forced to make fateful decisions for his clan, and confront his own son’s cowardice, at the start of an invasion by the planet’s original inhabitants from another land.

“Strange Trees, Tall Trees” at first looks like a standalone story, with “Tall Trees, Strange Trees” its sequel. However, they look more, in retrospect, like intertwined versions of the same tale, told in somewhat different ways, with two different narrators and from slightly different angles and time periods. It’s the old story of the Great White Hunter searching for hidden treasure in an alternate-history Africa, circa 1985, and living to regret it. The first story comes off as an homage to H.R. Haggard’s King Solomon’s Mines and the latter as a pastiche of Ernest Hemingway’s “The Snows of Kilimanjaro”, with a femme fatale, Bitch Goddess variation, taken from Dashiell Hammett’s The Maltese Falcon. The weaving together of all of these elements is very skillful, such that you appreciate the borrowings rather than resent them. But it falls down for me in that the femme fatale is less than compelling. She is so obvious and ruthless that it makes me wonder why either of the thoroughly-cynical narrators turns into such a blithering idiot over her. No woman is that hot.

The last (and other reprint) story actually comes between the previous two, but is unrelated to either. “On the Rock” starts with a career Census taker for a farflung star empire going pubcrawling in the scummier part of the most recent city he’s landed in and meeting a local girl. As you do. The planet is inhabited by the native sentient species, the fish-like Solani, and human descendants of a crashed Greek colony ship, who exist in a conflict-punctuated equilibrium. The narrator’s exploration of this equilibrium disrupts it…while also changing his own life forever.

I’d say this one was my favourite. While it has as traditional a plot structure as the others (very space opera of the 1950s), I think Harvey best integrates his use of traditional plot with his non-traditional interest in cultural detail (This time, the Greek Peloponnesian Islands) in “On the Rock”. Also, the love interest seems worth what the narrator ends up doing for her. But what I especially liked was that Harvey is using an idea that is the same basis as for Lovecraft’s “The Shadow over Innsmouth”, but with a very different, more sfnal spin.

This is a relatively small anthology, experimental in form and genre. All of the stories reflect Harvey’s concerns with different cultures, usually putting humans in opposition to aliens who are mysterious and dangerous, but not necessarily evil. Most of the stories also feature duplicitous women in some pivotal role regarding the plot of the cultural conflict. And, as I said before, they all have noir elements, even “On the Rock”. It’s a unique combination, to say the least.

You can buy Displacement from Amazon.com or directly from the publisher.