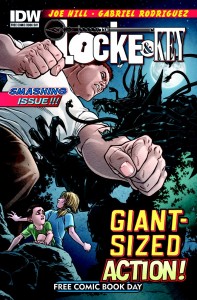 I went to Free Comic Book Day this year (It was last Saturday) and picked up some stuff. Most of it was promotional material, involving snippets of stories, but there was one interesting find: a Free Comic Book Day special issue of Locke & Key from last year. It acted as a PG-rated version of the usually R-rated series, which should be wrapping up for good this summer.

Locke & Key has been referred to as “Lovecraftian” and it does have some Lovecraft elements, though they’re largely of the name-dropping variety (such as that the house the kids live in is built on an island called “Lovecraft”). Overall, it comes across more like a cross between Disney’s Candleshoe and American Horror Story than Mythos. However, it is horror and there are some elements in here that Lovecraft might have appreciated, such as the seaside location and the idea of secret doors to other realms. You can get a better idea of the main storyline from our review of the unaired pilot that was shown at Comic-Con last year. Basically, Dad is murdered, so Mom and the three kids (two boys and a girl in the middle) come to live in a creepy old house that contains a lot of keys in various places that do magical things and are coveted by several beings (not all of them human). The house and grounds also seem to have various portals to other places. It’s not exactly kid-proofed.

The issue is part of the ongoing storyline, in that it involves the kids staying at home while their mother is away on business. They are attacked by a recurring villain, whereupon they use various weapons to fight back and one of the kids uses a key, even though doing that is very, very dangerous, to save the other two. Cue a lighthouse, a tidal wave, and a villain transformation that looks a lot like a Hound of Tindalos. Also, lots of very nice art.

It is difficult to get more of an idea than that, even though this is a normal-sized issue, because you’re dropped into the middle of everything. But it did work on me. I’d like to check out the rest.

You can find the first six pages here.