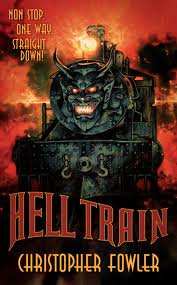 From the back of the book: “Imagine there was a supernatural chiller that Hammer Films never made. A grand epic produced at the studio’s peak, which played like a cross between the Dracula and Frankenstein films and Dr. Terror’s House of Horrors….”

Yeah, that got my attention, all right. And Christopher Fowler’s Hell Train mostly delivers on that promise, though I’d say it probably has more in common with the Amicus horror pictures of the era than with the Hammer ones. Not just in its portmanteau format but in its tone, its characters, etc.

The story opens in the “modern day” of Hammer’s glory years, with a young screenwriter named ‘Shane Carter’, fresh off a gig as script doctor for some of Roger Corman’s Poe movies, heading to England to try to land a job writing for Hammer Films, where he’s immediately asked to produce a script. Call this the framing story. The script he produces is a tale of four people trapped on board a hellish train traveling across war-torn Europe, a trip that will make each of them confront their greatest fears and weaknesses, and give each of them a different supernatural test that they must face (mostly) alone. These would be the portmanteau segments, although more closely connected than in any of the actual Amicus anthology films.

The supernatural threats (besides the Satanic train, itself) are pretty varied and fun, feeling right for the type of movie that the book is supposed to represent, but also not feeling too tired or well-worn. More than one kind of vampirism is present, though never quite of the traditional variety. There’s a seductive countess, an undead monster, a deadly doll, and an exotic insect that must, inevitably, get loose from its cage. There’s a decent chunk of enjoyment to be wrung from the book’s main story, though sometimes, it feels a little too much like it’s on rails (no pun intended), but for me, the best parts of the book actually came from the framing story and its brief view of Hammer’s golden years, and the foreshadowing of the great studio’s coming decline. There may not have been any monsters or spooks in those sections, but they were the places where the novel’s fondness for the old movies it’s emulating shone through most clearly and, therefore, were the book’s best moments.

All in all, if the tagline that I quoted at the beginning of this review grabs your attention the way it did mine, then you’re not likely to regret taking a ride on Hell Train. Just remember to think Amicus a little more than you think Hammer and I don’t think you’ll be disappointed.

You can purchase Hell Train from Amazon.com