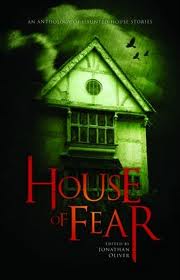 I was really disappointed in House of Fear, but I think a big part of that may be my own fault. Let me explain: I don’t review books very often these days, but when I saw this one come across the (virtual) desk here at Innsmouth Free Press, I jumped on it. The haunted house genre is one of my favourites and the idea of a solid anthology of haunted house stories made me very excited. That was my mistake.

It’s not that I found the stories in House of Fear to be bad. Rather, it’s that I didn’t find most of them to be what I would consider haunted house stories. They are, instead, ghost stories that happen to (mostly) take place in houses. Now, that probably seems like a pretty pointless semantic distinction, and it’s certainly a difficult one to clarify much farther than that, but, while I find that I have trouble explaining why, exactly, the two genres are very different in my head, and since I went into the book expecting one and got the other, I found myself very disappointed.
I know it’s not fair to blame a book for my expectations, but it does say “haunted house stories” right there on the cover, so consider this my up-front caveat. If you’re picking this book up because you’re looking for haunted house stories, and your conception of what constitutes a haunted house story is at all like mine, there’s a decent chance that you’re going to be disappointed.

Assuming you can get past that, though, there are plenty of good stories in House of Fear. I was surprised to find that most of the stories were strangely gentle (I can’t think of a better word) as far as ghost/horror stories go, shot through with much more melancholy than menace. Even Joe R. Lansdale’s contribution, which starts off with some nice early moments of creeping terror, settles into a rather-less-ominous ending.

Not that there’s not a place in the ghostly pantheon for a good gentle ghost story. Sarah Pinborough’s “The Room Upstairs” certainly falls under that heading and I found it one of the better stories in the book. Christopher Priest’s “Widow’s Weeds” and Garry Kilworth’s “Moretta” are both fairly traditional weird stories, with some nice Gothic trappings. And Nina Allan’s “The Muse of Copenhagen” may have a little gentleness in it, but transmutes that into some genuinely skin-crawling moments. It’s a quiet, slow-burning story that may be my favourite piece in House of Fear.

So, while I may’ve found myself pretty disappointed with House of Fear on the whole, I think that has as much to do with what I expected from it as it does with what it actually delivered. If you’re less attached to a specific expectation of a haunted house story, chances are you’ll find something to enjoy in House of Fear.

You can purchase House of Fear through Amazon.com