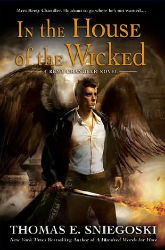 The Remy Chandler series is about a seraph named “Remiel” who deserted Heaven after Lucifer and his rebel angels were thrown out. Remy now lives on earth and works quietly (or tries to) as a private eye in Boston. Life’s been tough these past few years, though, since his wife, Madeleine, died of old age and he’s found himself stuck with cases that always seem to end up with his averting the latest apocalypse of the day. It doesn’t help that Remy has what humans would term ‘Dissociative Identity Disorder’ on top of PTSD.

That is to say, like other fallen angels, Remy has taken on a “human” persona to pass unnoticed and also still suffers guilt and anger over the carnage he saw, and inflicted, during the War in Heaven. For most angels, this persona is just a mask. For Remy, it’s become a major identity crisis between his snarky human self and his not-so-former homicidal (and increasingly superpowered) angel side. It’s somewhere between the extremes of Bruce Wayne/Batman and David Banner/Hulk, but that’s little comfort when Remiel comes out to play with fire. As you will notice early on in this book – say, by page 12.

In the House of the Wicked, due out next Tuesday, is the fifth entry of the series and you might think it would start to be winding down or getting repetitive. Nope. In fact, In the House of the Wicked starts enough new plots and subplots that it might well serve as a good entry point for a new reader who doesn’t want to have to play catch-up with the first four books. At the same time, for those of you long-time readers, you know that other shoe you’ve been waiting for? The big, 900-pound gorilla shoe Remy’s always complaining he’s never encountered? Well, it drops late in the book and changes things up to a whole new level. And that’s not even getting into the twist near the end where we find out that major players were really minor pawns.

This time round, we begin with a sorcerer who bullies a condemned rabbi to give up an important secret, and proceed to a sinister plan by a crippled cult that involves Remy, an even-more-sinister plan by a group of despairing fallen angels that also involves Remy, and a saintly little girl who’s more than she seems. And Remy gets something he subconsciously wished for, but ends up really not enjoying at all.

Francis is also in the mix, a whole lot, and making some new friends when a hole in the sky opens up. This being a Remy Chandler novel, that hole is not metaphorical. To say much more about Francis’ storyline would give away too much, but he does take a vow to renounce excessive violence and foul language ([snort] Just kidding. This is Francis we’re talking about, here. Expect arkloads of blood, guts, snark, gratutious cursing, and use of awesome weaponry, instead).

As you can see from the above, there’s a lot going on. In one sense, the book is fairly linear in that all of the characters are more-or-less focused on the same storyline in any given section. In another sense, the book is more complex than previous novels, which were mostly about Remy and his investigation of a single large mystery, and there are several major tonal changes in the book. We start with one mystery. That is resolved, leading to another mystery or problem, which is then also resolved, and so on. It’s not episodic; one thing definitely leads to another. In fact, you could see this as the first book in a much-larger, coherent plot. But it is not the relatively simple idea of trying to solve one big mystery or dealing with a single situation.

I had to admire Sniegoski’s ability to juggle so many balls at once. While he drops one or two, even those like Remy’s human drinking buddy, Detective Mulvehill’s, reaction to finding out about Remy’s true nature in the previous book end on something intriguing. In Mulvehill’s case, he gets some Da Vinci Code action at the very end. As you might expect when your best friend is an angel.

Speaking of Mulvehill, several major characters take some big hits in this book. While they keep on trucking, they don’t just shrug off these hits, or respond in some melodramatically angsty fashion, the way characters do in your usual urban fantasy novels. This is full-out war and characters are realistically traumatised by, say, having to kill or be killed, or having their entire worldview set on its ear.

Even the villains (with the possible exception of one major antagonist, who is a bit Snidely Whiplash) have motivations that make sense and make you at least pity them, even as you understand why squashing them like bugs might be the best possible outcome for the safety of the universe. You can understand their hopes and fears, even as they make the mistakes that damn them. And by “mistakes”, I don’t mean wearing patent leather shoes that reflect up or thinking naughty thoughts about Sister Mary Elephant. I mean crimes like self-serving murder and human sacrifice, and casual betrayal. At least one … turns out not to be a villain at all. I think that was my favourite new character and I’m not going to tell you who it was, but that one’s fate felt genuinely heroic and tragic.

This is a fun book, even by the usual Remy Chandler standards. It’s also a thought-provoking book. Admittedly, that’s while delivering almost wall-to-wall action, but the two goals don’t have to be mutually exclusive. I find myself enjoying each successive book more as they come out, a bit like Steven Saylor’s Roma Sub Rosa series. Unlike other dark fantasy/horror angel stories, the angels here are not scapegoats for sins humans don’t like to acknowledge and Free Will is not treated like some random cruel experiment by a capricious maker.

Sniegoski carefully avoids the convenient, utilitarian out that angels are only good when they are helping humans and evil when they are not (Call it the “Clarence Needs His Wings Trap”). From the angels’ point of view in In the House of the Wicked, humans are selfish and weak, eager to blame their problems and mistakes on God or his angels or the Devil, or even other humans – anyone but themselves. Worse, the humans have a frighteningly corrupting influence on angels. And the angels are right. Humans are all of those things. On the other hand, you can see from the smaller, quieter scenes why angels like Remy and Francis love and fight to save the humans, in the first place. We have our moments.

You can buy In the House of the Wicked from Amazon.com.