Cynical insurance investigator John Trent (Sam Neill) is hired by a publishing firm to find its AWOL bestselling author, Sutter Cane (Jurgen Prochnow), and retrieve the book of the title. Cane’s past books have had a “disturbing” effect on his less-stable readers and the rumour is that the latest will drive any reader insane. Skeptical of a publicity stunt, or even outright fraud, Trent goes on a road trip with Cane’s editor, Linda Styles (Julie Carmen), to locate Cane. Once they arrive in the previously-thought-fictional hamlet of Hobbs’ End, things start to get seriously weird. How weird? Trent narrates most of the tale to a skeptical shrink (David Warner) inside a padded cell. That’s how weird.

I’m going to go out on a limb and say that In the Mouth of Madness is probably the best Mythos film, and one of the best horror films, ever made (though I’m sure some pathetic fanboy on IMDB or wherever will disagree just to make himself look cool. Said theoretical fanboy can kindly kiss my ass). There are the films that everyone respects as being “groundbreaking”, blah, blah, blah (even if they don’t actually enjoy them), and then there are the ones that are just plain fun. And then there are the ones, like In the Mouth of Madness, that are both. Someone might make a Mythos

flick as good, or possibly even better, in the future, but so far, this one is the champ. It’s not strictly Lovecraft: it’s not based on any single Lovecraft story and Cane is modeled more on Stephen King than the Man from Providence. Nonetheless, it’s definitively Mythos, to the point where it could have gotten the film’s creator, John Carpenter, in serious copyright trouble had Lovecraft not been so generous with others using his work, even during his own lifetime. You’ve got the creepy little New England Town that Time Forgot, a mad protag (two, in fact), inbred villagefolk with tainted blood, people being turned into tentacled monsters, a cursed book full of forbidden knowledge, flexible reality (to put it charitably), and, of course, deadly old gods wanting to come in from the Outer Dark and bring an apocalypse to our world. References to Lovecraft’s stories and even some paraphrases/quotes are littered throughout the film. The title, of course, is a play on Lovecraft’s “At the Mountains of Madness”. To call it a “pastiche” is almost an insult. This is an homage, a love letter, a heartfelt thank-you note. It’s also a damned good film and scary as hell.

Carpenter had certainly dabbled in Mythos in the past (notably, The Thing, which both Silvia and I have enthusiastically discussed, and which is the first of Carpenter’s “Apocalypse Trilogy”, which also includes Prince of Darkness and In the Mouth of Madness), but this one is different. This one is straight-up Mythos, no chaser. It will seriously screw with your sense of reality in a way that the original Ringu only manages once. Ringu is creepy as hell the first time you watch it, but it really loses its effect about a week later (for obvious reasons if you’ve seen it). Not In the Mouth of Madness. This puppy will stay with you for a long, long time, especially that disturbing ending that makes its nasty movie-within-reality connection.

The big proof, for me, is that In the Mouth of Madness is scary no matter how you view it or how many times you see it. A lot of films don’t work when you watch

them in the comfort of your living room with the lights on or after the first time. This one doesn’t have that problem. There are some scenes that are worth watching in the theatre (I was one of the lucky few who caught this when it flashed through its first run back in 1994), most notably, the bit where Trent looks out into the abyss inside the church while Styles reads from the book. That one was the most effective in the theatre. On the flip side, the “blue” scene works better on TV even than in the theatre (and it worked fine, there).

Carpenter uses such simple techniques in a lot of the scenes that the film should be taught as a textbook case in how to make good horror. Profanity, especially the word “fuck”, is used judiciously for maximum effect and there is no nudity (unless you count the old man in handcuffs. No, don’t ask) or sex. The gore is disturbing, including blood, severed fingers and stringy meat, but Carpenter only allows us to see it in very-quick, subliminal cuts. There is a hell of a lot of violence, though most of it occurs just off-screen. Carpenter keeps the pace moving briskly along and uses random, unpredictable attacks on the characters to keep them (and us) on edge. He often builds up the suspense for the audience by showing us the preliminary to the attack while

making it a complete surprise for the character. An early example in the film is when Cane’s agent’s comes after Trent with an axe in a crowded cafe. Why did the agent attack Trent? He’d read the book.

Another effective technique is the way Carpenter messes with the characters’ (and our) sense of reality. We are dragged right in along with the characters and mostly see just what they do. The characters’ sanity is challenged by their witnessing clearly-impossible things, by their being confronted with unassailable evidence that what they think happened didn’t happen that way, and by their experiencing multiple versions of the same event. There’s the painting at the inn, for example, where multiple viewings transform a pretty couple beside a peaceful lake into two tentacled monsters in front of the village’s humongous Byzantine church. There’s also a divide-and-conquer aspect where only one character at a time is shown the “truth” and driven mad right in front of the skeptical (and oblivious) eyes of others who don’t see anything odd. Yet. 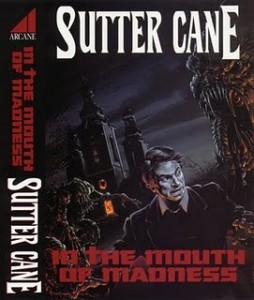 In the Mouth of Madness also trades in extreme forms of body dysmorphia that are disturbing as hell and arguably the creepiest parts of the film. Facial features are distorted completely out of place, eyes popped out, heads and limbs twisted into impossible alignments. It makes your eyes ache just looking at them. And then there are the tentacle transformations, lots and lots of those. Characters who have read the book go nuts, first, and then start losing their human shape, becoming literal, murderous monsters.

“What about the people who don’t read?” the shrink asks Trent near the end.

If you enjoyed this review, please consider making a small donation to Innsmouth Free Press.