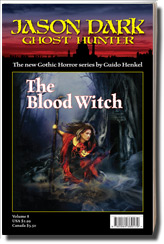 This book is pulp at its purest.

Equal parts mystery and horror tale, Guido Henkel’s The Blood Witch is a devilishly entertaining little dime novel. Only a scant sixty-odd pages in length, but it’s a satisfying sixty-odd pages to be sure.

The Blood Witch is the newest addition to Henkel’s ongoing series about Jason Dark, a Victorian ghost hunter in the mould of John Silence or Aylmer Vance. Dark is a two-fisted, mighty-brained phantom-fighter of the first order, with an occult library that’s the envy of Aleister Crowley and an armory that would have Bulldog Drummond panting. He reaches his conclusions quickly and correctly, via books which are amazingly, coincidentally easy-to-hand, and then gets on with the business of putting an end to the eponymous witch. Though he does receive some help on that score from his sidekick, Siu Lin – the Kato to his Green Hornet, if you will.

It’s an apt comparison, since the story’s foundations rest on the friendship between the two characters. It’s a relationship that Henkel has spent seven previous volumes building up and it shows. The characters interact with the easy familiarity of old friends and that really helps to sell the story. While the nature of the series characters prohibits any real worry over their fate from the reader, the connection between Dark and Siu Lin allows the reader to vicariously feel the thrill of the dangers that they encounter.

That said, background information on either character is thin on the page. But, Henkel is adept at giving just enough information to introduce his characters to the reader without bogging the overall story down in unnecessary details. We’re given everything we need to know about Dark, and his place in the world, in a few brief sentences. Yet, there is, regardless, a sense that both Dark and Siu Lin live in a larger world, and have secrets and stories separate from the one told in The Blood Witch. They never feel like cardboard cutouts.

In fact, most of Henkel’s characters tend towards the three-dimensional. Even the villains have their brief moments of character development, which, while not rendering them entirely sympathetic, do make them easier to read about.

Speaking of which, the book is just that – easy to read. Henkel’s prose has a tendency towards the utilitarian, especially in his descriptions, but touches on the purple, occasionally, and always in the proper spots for a story of this nature. He has a gift for writing easy-to-visualize action sequences, though at times the reader may feel that his dialogue falls flat as characters lapse into periods of speaking at one another instead of to one another. This is, however, a rare occurrence.

On the whole, the book moves quickly, wasting little time in setting up the conflict between Dark and his antagonist (whose identity was a bit surprising, considering how she’s usually portrayed in fiction) for this go-round and then sending the reader rolling downhill towards the resolution, which has a number of surprising twists and turns.

The story itself is neither engrossing nor dull. The plot is sufficiently convoluted to keep the reader entertained, without being altogether too enthralling. As stated above, The Blood Witch is an easy afternoon’s read and highly enjoyable, especially if you’re a fan of characters like Hodgson’s Carnacki or Robert E. Howard’s Kirowan. And truthfully, there’s nothing wrong with that. The pulps of yesteryear that Henkel is emulating with this series were entertainment and nothing more, and that seems to be Henkel’s aim as well. And he delivers in spades.

The Blood Witch is a bargain if you’re in the mood for a rollicking horror-adventure romp with a touch of the Gothic about it. It’s pure pulp, unhindered by either pretension or hesitation, and it’s all the stronger because of that.

Jason Dark, Ghost-Hunter, Volume 8: The Blood Witch is available to either read for free or purchase from the series website. You can learn more about the author, or the series via the same site.