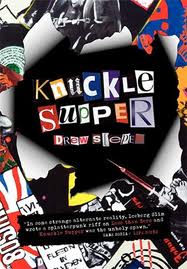 Whether intentional or not, Stepek has taken vampirism to the other edge of the bell curve, sitting on the opposite end as far away from Twilight as he can and giving it the finger while he pukes in a trash can.

The hero, and I use the term quite loosely, in Knuckle Supper is a middle-aged, undead punk-rocker named “RJ”. RJ is a smack-addicted, drug-dealing, gang-banging vampire. He is not a common vampire gangster drug addict though, he is also the leader of the Knucklers, the undead ‘deadicated’ (Sorry, I couldn’t resist) to pushing heroin on the people of LA. One of the reasons the various vampire gangs can co-exist, without tearing out each other’s throats, is because each gang focuses on a different type of drug. As long as they mix the substance with warm blood, they can enjoy it as readily as anyone.

RJ will not snuggle and listen to your feelings, at least until he takes in a 12-year-old prostitute. She quickly becomes more trouble than she is worth. Perhaps it is her mixture of evil and innocence that sways him, but RJ finds himself adopting the wench instead of making her into a snack.

Despite her ill-bred ways, she manages to link him to a thread of his forgotten humanity, just in time for him to be betrayed by everyone he knows. For good or for ill, the little girl, known as “Bait”, will lead RJ into a maze of intrigue that will not only destroy the makeshift world he had grown to know, but his own as well.

Still, is RJ really a vampire? He doesn’t remember any mortal life or how he became an adult. Waking up in an alley eating rats doesn’t illuminate much of a man’s past. Yet, when everything he knows falls apart, RJ still struggles to save the girl that has fallen into his grasp. Whether this is because he has some hope of sanity within this realm of the mad, or his drug-riddled brain has finally decayed, is up for grabs.

Stepek creates a brutal world not for the meek. It you like your dark fantasy quick-paced and bloody, this might be your type of action. This is not the clean, polished vampire that Hollywood seems happy to push on us these days. RJ and his fellow bloodsuckers are horrid killers. Not just filling to survive, but also to use the prey to squelch their jones.

The mood is dark and bleak. Be ready for some gore. If you can’t stomach the blood, go rent Twilight. However, if you are sick of pansy vampires that want to snuggle, this novel can clear the bad taste out of your mouth. It will fill it with blood.

Knuckle Supper is available from Amazon.com.