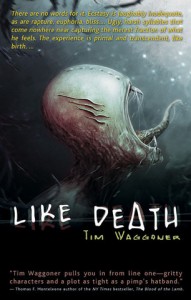 I took one look at the cover of Tim Waggoner’s newest novel, Like Death, and had to read it. An eyeless monster screams into the darkness, revealing long, sharp fangs and a tongue reminiscent of a proboscis. In what strange and horrifying world could such a creature exist?

As it turns out, “strange” and “horrifying” barely begin to describe what goes on in Tim Waggoner’s fertile imagination. Like Death is creepy, then terrifying, then truly disturbing. Some of the sequences made me squirm in my seat. As a warning: Quite a bit of the violence is sexual in nature, so if that sort of thing is a trigger for you, you might want to avoid this book.

If sexual violence is right up your alley, however, then welcome to the weird world of Like Death. Our protagonist, Scott Raymond, is a true crime writer. I can hear you saying now, “Another horror novel about a writer?” – but bear with me. Scott Raymond is different. As a child, he was the only survivor of the brutal massacre of his entire family. Trouble is, he blocked out most of the memory, so he has no idea who killed his family or why.

Since then, Scott has managed to eke out a fairly normal existence. He even had a wife and son, but things have been getting weird lately, and his long-suppressed violent impulses are surfacing. He blames the crime writing, but something much darker is at work in Scott’s life. The book opens with Scott’s move to Ash Creek in an effort to reconnect with his estranged wife and son…and also do some research on the recent abduction of a little girl for yet another true crime novel. But what Scott finds in Ash Creek is more than he expected. Strange occurrences become more frequent and, eventually, Scott wonders about his sanity. Hallucinations ensue, until he feels like he’s trapped in a nightmare he can’t escape. Horribly, the truth is actually even darker than Scott can imagine!

The first half of this novel is a slow burn. Waggoner takes his time with dream sequences and conversations and characterisation, sometimes describing scenes down to the very last detail. Scenes were sometimes a little slow for my taste. The second half of the novel, however, is the payoff for all the time invested in strong characters and a really creepy setting. The truth is finally revealed and it’s pretty satisfying after so much buildup. Armed with the truth about the very nature of reality, Scott must battle his own demons in order to save those he loves. That sounds cryptic, but I really can’t tell you more than that without giving away the mystery that makes this book such an entertaining read.

Be assured, however, that Waggoner pulls no punches. Just when you think that he might spare the protagonist some misery, he doesn’t. Nearly everything horrible you can imagine happens to Scott Raymond in this novel. But the ending is satisfying, wrapping up all the loose ends and involving all the sundry characters (and monsters) we met along the way. More importantly, it’s an ending that’s about as happy as it can be for a man who endures so much horror. Even in the darkest depths of Tim Waggoner’s imagination, there’s still hope, and ultimately, it’s that which keeps us reading along with Scott’s difficult, sometimes harrowing, journey. And in that, the book does not disappoint.