[dropcap]Y[/dropcap]ou don’t have to be a gourmand to know that cooking is an art and you don’t have to rock a Yelp account to know that foodie culture is at an all-time high. The comparative ease with which exotic ingredients can now be acquired may have something to do with it, 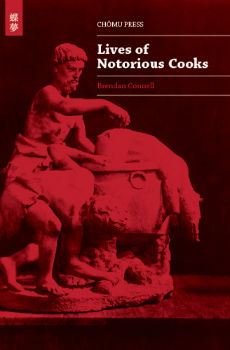 or the ever-increasing popularity in food preparation media, be it cooking channels on television (as opposed to mere programs), or glossy, high-quality magazines. For those with a predilection for such food porn, Brendan Connell’s new work Lives of Notorious Cooks, from the incomparable Chômu Press, will be a sumptuous addition to the library…but even if your tastes don’t run toward the table, the brilliant, wry, and sometimes heartbreaking writing will sate your hunger for bold, original fiction. The title says it all, the text being 51 fictional biographies of cooks dating from ancient Greece to pre-Columbian Peru to Edo Japan to 19th-century America, but, as with any menu, the list of ingredients hardly tells the whole story.

Right, now that we’ve got the obligatory food and cooking metaphors out of the way, we can get on to the text itself. Once you’ve picked up the book, however, you’ll see just how hard it is to talk about the text without dragging in edible language. It even reads like a series of carefully prepared courses meant to complement one another, in that, after reading only one or two entries, the reader feels engorged on the rich language – this is a book to be read slowly and savored, not the sort of collection where you race to finish it.

The style of the pieces shift, depending on their setting, as one might expect: The book opens with Agis, a cook of ancient Greece, and wears it Classical mythology on its plate, whereas the account of Japanese noblewoman Lady Jōshi is styled after a Heian pillow book. Accordingly, some of the stories have the overtly supernatural intrude in casual fashion, whereas others are only brushed with the fabulous and many of them have no fantastical elements at all. The tones also fluctuate throughout, with entries that begin ornate and complex yielding to unexpected lightness, and others with beguilingly simple ingredients transformed into the profound through the deft hand of their cook. The interplay and overlap between the individual pieces adds another ingenious layer to the collection. If, on rare occasion, an entry leaves one exhausted, this seems to be more an absurdist punchline than a fault of the author’s.

Simply put, as readers, we don’t often enjoy the opportunity to sample works that are both truly unique and masterfully well-executed. Notorious Lives of Cooks is one of those rare delights that should appeal to most anyone who enjoys good writing. If the reader takes even the slightest enjoyment in cooking, or even just eating, this is the tastiest collection in years. The paradox comes at the end, where, despite the richness and range Connell has provided throughout, you come to realize you’re still hungry and perhaps always will be.

You can find Lives of Notorious Cooks on Amazon.com.