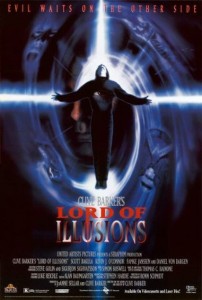 In a kiva-like ruined house in the desert, cult leader Nix (von Bargen) is presiding over the human sacrifice of a young girl. When renegade members of his flock, led by Philip Swann (O’Connor) attack the house to rescue the girl, Nix shows his true power, a terrifying dark magic. But Swann and the others have come prepared. After the girl shoots him, Swann screws him into a sorcerous mask, and binds him in death. Unfortunately, one cult member loyal to Nix survives and escapes, determined to bring Nix back.

Thirteen years later, cynical (are there any other kind?) New York private detective Harry D’Amour (Bakula) runs across an occult murder while on a routine case in Los Angeles. Shortly thereafter, he’s hired by Swann’s wife, the devoted and haunted Dorothea (Janssen), to investigate the murder – and then the “accidental” death of her husband, who has risen to become a famous illusionist, in the middle of his sword act. Fortunately, D’Amour is experienced in these matters, having just come off an exorcism-gone-ugly back east. Unfortunately, even he is in way over his head. Dorothea is convinced that Nix will return. She may be right.

This is Clive Barker, directing his own stuff (i.e. Hellraiser), so you know what to expect: gruesome body horror, extreme physical and psychic self-mortification, occult transhumanism, apocalypse, magicians and carnie acts, obsessed and psychopathic villains seeking forbidden knowledge, whips, chains, acupuncture needles, gratuitous nudity, bloody phallic symbology, and so on. This is also a fairly early version of occult noir that came out a few years after Cast a Deadly Spell (and there are both cinematographic and thematic similarities between the two, reflecting their 90s horror roots, though Cast a Deadly Spell is lighter in tone).

Barker is one of those authors that I respect for his influence rather than actually enjoy reading. That may be why most of the film adaptations of his works don’t float my boat, but I did enjoy Lord of Illusions. I first saw it on premium cable back in the 90s, before anyone had ever heard of it. Aside from a small cult following and the larger body of Clive Barker fans, I’m not sure all that many people know of it now.

Barker does a good job directing himself. George Lucas he’s not. Nor is this his first directorial go-round by far (That was a short called “Salome“). Bakula, for example, is a good choice for the violent D’Amour. He makes our stock detective character sympathetic in a way that a harder-edged actor couldn’t have done. Similarly, Janssen tones down the savagery of her Bond-girl outing in Goldeneye the same year to play the sad and traumatised Dorothea as an unwilling femme fatale. And O’Connor is appropriately dodgy as Swann, so that you wonder about his motives throughout. Von Bargen? Is just plain disturbing.

You can see Lovecraftian influences in the film, not least in the mad cult, the dark quest for knowledge, sinister books, and the pervasive theme of how to separate reality from fantasy and illusion – and unreality. In one scene, for example, D’Amour visits a former cultmember in a madhouse. She babbles on about how they overstepped, trying to learn things they shouldn’t have known, and will now pay – before conveniently running in front of a car.

However, Barker makes the elements his own. The women in his stories have a much larger role. The protagonist is far more active and aggressive than your classic Lovecraft protagonist. There’s a sensuality and heat (generated by the LA climate and Spanish architecture) lacking in the original Mythos. These elements belong to Barker, or are borrowed from noir. And the Manson Family vibe is definitely post-Lovecraft.

Some of the special effects (not the blood and gore) are a bit dated, but still surprisingly effective ( like the fire man that attacks D’Amour at Dorothea’s house). That stems from the menace built up over the course of the film. There’s a lot of suggestion and metaphorical imagery. And while you can figure out the mystery pretty early on (considering that the prologue and D’Amour’s own backstory completely undercut his skepticism about his client’s fears), this is a case where the journey is as much fun as the destination. You know what’s coming. The question lies more in how it will play out and who will walk away from it.

You can buy Lord of Illusions from Amazon.com.