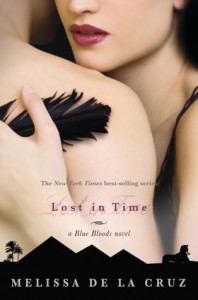 After reading this latest installment of the Blue Blood saga, one of my greatest regrets is my late arrival to the series. I had no idea that this story even existed before I reviewed the excellent short-story triptych, “Bloody Valentine”, for this website. Now it appears that I’ve arrived just in time to see the beginning of the end. However, it is a testament to Ms. De La Cruz’s strength as a writer that she writes her books in such a way that newcomers like myself feel just as welcome as people who have been following the story for years. It is a rare feat for any ongoing series, very hard to achieve. I have only seen it done successfully on one other occasion, with Rick Riordan’s “Percy Jackson and the Olympians” series.

Okay, all well and good, but what, exactly is the story? In a word, grim. The action picks up right after the conclusion of the events in “Bloody Valentine”. Indeed, like “Bloody Valentine”, the story proceeds along three separate tracks, which cycle through the chapters like a CD player set on repeat. The first finds Jack Force (AKA Abbadon, the Angel of Destruction) being convinced by his newly wedded bride (the half-human, half-Blue Blood Schuyler Van Alen) to delay going to fight with his twin, Mimi Force (AKA Azrael, the Angel of Death). Instead, they go to pre-Arab-Spring Egypt in search of the legendary Gate of Promise, supposedly in the guardianship of Catherine of Siena.

But in the rapidly decaying order of the vampire Covens, there is no such place as Switzerland. Their search is complicated by attacks by the Nephilim (straight-up demons who have plagued the Blue Bloods for millennia) and some of the few surviving Venators hot on their heels. It all ultimately leads them to revelations both disillusioning and startling.

In the second track, Mimi is actually in the same neighbourhood with Oliver Hazard-Perry, one-time lover of Schuyler who gave up his love and gave her away at the wedding in “Bloody Valentine”. Mimi, too, is in Egypt on a mission of love, albeit mixed with duty. The Blue

Blood Covens are slowly self-destructing with infestations of Silver Bloods (nasty, unrepentant fallen angels who are vampires like the Blue Bloods) and heavy Blue Blood casualties taking their toll. Deciding that she cannot lead the Covens alone, in light of Jack’s abdication of his duty in favour of his marriage to Schuyler (whose lineage makes her outcast from Blue Blood society), Mimi has decided to go to Hell with Oliver to retrieve her lover, Kingsley Martin, a Silver Blood who was surprisingly loyal to the Blue Bloods that he protected as a Venator. There’s only one thing she hasn’t told Oliver: The still-lovelorn mortal is to be left in Hell, after she finds Kingsley, as payment. Of course, as the best-laid plans of mice and vampires often go awry, the descent into Hell puts enough personal demons in Mimi’s face to make her decide on, not one, but two radical decisions by the story’s end. One of them involves Jack.

In the third track, we once again pick up the story of Schuyler’s mother, Allegra, from where we left off in “Bloody Valentine”. It is now 1989 and Allegra is getting ready to make her new, pre-planned life with Charles work the way it should. She is, after all, the Archangel Gabrielle and Charles is the Archangel Michael, the only Blue Bloods to ever willingly choose to become vampires (The others were condemned to that state by God). This current cycle on the reincarnation wheel looks to be the same as any other. Allegra’s past romance with the mortal Stephen Chase is the furthest thing from her mind as she visits San Francisco…until she happens to see a painting of his, entitled “Always Something There To Remind Me”. That simple chance find begins a series of events that will destroy every plan Allegra ever made for her future, put her at odds with the society that she was supposed to lead, and leave behind shockwaves that can be felt well into the present day.

As always, Ms. De La Cruz’s writing is skeletal and sharp. Just enough details are given about the settings and characters for the reader to fill in the blanks. Most of the prose is devoted to the thoughts and feelings of whatever character is assuming the POV for that particular chapter.  Where one feels this last tendency the most strongly is in Mimi and Oliver’s descent into Hell. Forget the clichés served up by Christian fundamentalists: Ms. De La Cruz’s version is a more torturous place than any lake of fire could hope to be. Much like in the classic Twilight Zone episode, “A Nice Place To Visit”, this is a place that gives you your heart’s desire and then slowly strips your being from the inside out. As you read the subtle lures offered to Mimi and Oliver at the “resort”, you may well understand how easy it is to fall into such a trap for eternity.

It is no secret that Ms. De La Cruz’s great theme for this series is love minus the saccharine. To this story, she adds the universal theme of sacrifice, with heavy emphasis on the consequences. With the exception of the Silver Bloods and Nephilim, there are no true “bad guys” in the main cast…or maybe it is better to say that such “bad guys” are extremely relatable and sympathetic. Mimi is probably the best example: a vampiric lady with an arrogance that would do credit to a Boston Brahmin. Yet, for all her “ends justify the means” thoughts, at heart, she is just a lonely girl who wants the most important person in her life back in it. Her great tragedy is that she never appreciated what she had until it was gone. Her journey through Hell with Oliver (who has to confront more than a few residual feelings for Schuyler on the way) makes her realise what is truly important. Schuyler is at the opposite end of this equation, knowing good and full well what she has in Jack, and determined to hang onto it by whatever means necessary. But the revelations that she finds force her to rethink what she needs to do for the good of all…regardless of what it costs her. Allegra does her best to ignore her heart, only to find out that there is no life worth living without love in it. Throughout her story, we see the seeds of the chaos of the present, which ultimately prove the wisdom of her choice.

The title of this story is a little puzzling, at first. Why “Lost In Time”? The title smacks of a bad Roger Corman B-movie. But the meaning becomes clearer as the reader goes deeper into the story. Schuyler stands poised to lose her newly-married husband to the obligations of his station. Mimi has lost the one person she ever truly loved to Hell. Oliver has lost Schuyler to someone she truly loves. Allegra literally loses everything that made her a part of the Blue Bloods to marry the man she loves…only to lose her life to give birth to her daughter. Add the wholesale devastation of the Covens and the unraveling of Blue Blood society, and the title becomes all-too-clear. Eventually, we lose everything to time, including our lives. How we deal with that eventual loss is the true definition of who we are.

There are two opening quotes to this novel, one from stellastarr* and the other from Tennessee Williams. I would add one more from Alfred, Lord Tennyson’s “In Memoriam A.H.H.”: “’Tis better to have loved and lost/Than never to have loved at all.” This thought could apply to the entire Blue Blood series, but I can see the sharp edge of its meaning here. Don’t be intimidated by coming in late like I did. Ms. De La Cruz’s story needs no prior knowledge of the backstory to truly enjoy it.

You can buy Lost in Time from Amazon.com.