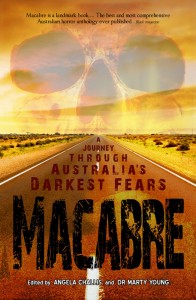 When I began reading Macabre, I didn’t set out to review it. As a current committee member of the Australian Horror Writers Association – and with one of the editors, Marty Young, being the outgoing president of the association – I figured there’d be a conflict of interest or cries of bias, but midway through my read, the quality and historical significance of the book overrode my reserve.

Macabre is more than a collection of short stories; it is a timeline of the Australian horror genre, from its first tentative steps of settlement through to the present. And a rich history it is. Editors Angela Challis and Marty Young have gathered 38 stories for Macabre, and created a mammoth anthology comprising almost seven hundred pages.

The foreword, by Dr. Young, gives an insightful overview of the development of Australian horror literature and sets up the reader for the stories within. The attention to detail, and the hours (upon hours) both editors spent researching and reading, shows their passion for the genre and its cultural significance for those of us who read and write dark fiction.

What I especially liked about Macabre was that it’s split into three separate sections: the ‘Classics’ (1836-1979); the ‘Modern Masters’ (1980-2000); and the ‘New Era’ (2000 onwards). Each story is preceded by the author’s bio. In the ‘Classics’, this brings greater light to those who first forged horror writing in Australia, and championed the genre in a new land as harsh and violent as the stories they created.

Ms. Challis and Dr. Young chose to keep the classic stories in their original format – grammar, punctuation and spelling untouched – to keep with historical accuracy. Genius. I worried it would obscure each tale, but, instead, it drew me back in time.

I was enamoured with the ‘Classics’, and my favourite story is featured in this section: “The White Maniac” by Waif Wander. “Waif Wander” is Mary Fortune (1833-1910) the “first female Australian crime writer and one of the first female crime writers in the world.” “The White Maniac” is also considered the first “vampire” story by an Australian author and it’s brilliant. The weaving of this white, cut-off world, and the imagery Ms. Fortune brings, dragged me into the story completely, and the ending gave me chills. This story was first published in 1867. That it still captivates, over one hundred and forty years later, is testament to Ms. Fortune’s skill.

Famous Australian poet, Henry Lawson, is also featured in this section. I admit (shamefully), I wasn’t aware he wrote horror. “The Ghostly Door” is a treat, full of wonderful language and building tension (no spoilers). I will be proud to say, when someone quotes from one of Mr Lawson’s poems, “You know, he wrote horror.”

Australia’s first indigenous horror writer, David Unaipon (1872-1967), resides in this section. His story, “Yara Ma Tha Who”, is an indigenous vampire story and, while short, it blends Aboriginal lore with modern horror, told in such a way it makes you want to lock your door.

Moving on to the ‘Modern Masters’ (1980-2000), we are treated to such authors as Robert Hood, Sean Williams, Terry Dowling, and Stephen Dedman (to name but a few). This era shows the emergence of Australian writers and the talent that brought them to the international stage.

“Entropy” (1995) by Leanne Frahm is my pick of this section. Told in the first person via a series of vignettes, I was drawn into this maddeningly dirty and obsessively clean story. The horror in this piece is mostly off-page, but it doesn’t at all lessen its impact. From the protagonist’s childhood through to the end, I was invested in the character – hell, I was hooked. Ms. Frahm creates a madness stoically explained and woven seamlessly with science. I believed as the protagonist did, and you can’t ask for more than that.

Kaaron Warren’s “A Positive” (1997) is another disturbing read from an award-winning author. From one paragraph to the next, we are delivered into the tortuous horror of one man’s ‘life’ with his family. This is a vampire story of sorts, though there are no fangs and certainly nothing sparkly, but the slow leaching of the protagonist’s life by his family, and the fattening of the proverbial pig beforehand, is chilling. Revenge really is a dish best served cold. “A Positive” has recently been turned into a short film – Patience – by Bearcage Productions.

The last story in this section is Rick Kennett’s “Due West” (1997). Set in 1935 rural Queensland, it follows a father coming to terms with the death of his son, and the strange hauntings of his house and land. With ritual murder, town secrets, black magic, and keyholes as portals, “Due West” is a slow burn and one of my favourite stories of the anthology.

The ‘New Era’ is kicked off with Mr Andrew McKeirnan’s “All the Clowns in Clowntown”. Those who know me know of my intense dislike of clowns (okay, hatred), so I began this story with a little trepidation. Mr. McKeirnan creates a town where clowns are defined by their painted faces – it is their true one and worn with immense pride. But ‘Clowntown’ is soon thrown into chaos by the arrival of a circus (another pet hate). Mr. McKeirnan brings the town and the circus to life with sound, scent and an imagery that is done remarkably well – I could smell the peanuts, hear the trumpets. Dark though it was, the humour peppered throughout created an extra layer to the story. Did it change my opinion of clowns? No – may they all burn in Hell – but, I admit, I was rooting for those face-painted freaks.

There are so many stories in this section I enjoyed, each one a new gift to be unwrapped. One worth special mention is Martin Livings’ “Crawlin”. The first person narrative of this piece, the agony and the desperation of the character, is reinforced by the style. Bare-bones punctuation drives this story forward, and the disjointed thoughts, feelings and experiences transported me completely into the main character’s hell.

Macabre: A Journey Through Australia’s Darkest Fears isn’t just another anthology, nor is it just for Australians. It shows literature in its early stages from a land and people coming to terms with its own new era. There are stories that will delight and tales that disturb. While not all garnered the ‘wow’ factor, I think Dr. Young and Ms. Challis chose extraordinarily well. There are stories in here for everyone – from those who like their horror dark and visceral, to those who like the quiet creep that lures your imagination into working with them. Macabre, like the stories in the ‘Classics’ section, is an anthology for the ages and I cannot recommend it enough. Macabre won the 2011 Australian Shadows Award (Best Edited Publication), and was nominated for Bram Stoker, Aurealis and Ditmar Awards, which speaks of its excellence and wide appeal both here and internationally.

The publisher has closed down, but you can still buy Macabre: A Journey Through Australia’s Darkest Fears directly from Marty Young at Brimstone Press.