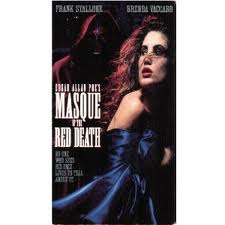 I am not averse to bad movies. Bad movies can be pretty entertaining, as my occasional reviews may have demonstrated. Now that Netflix is in Canada, I’ve had a chance to plumb the depths of B-horror for less than $10 a month. The result? I’ve watched a lot of subpar stuff but nothing that compares to Masque of the Red Death. Do not be fooled by the cover, which seems to showcase a traditional, 19th-century Gothic heroine looking scared, because there is nothing Gothic about this movie. For that matter, the connection with Poe is nonexistent. I mean, even in his most binge-party mode, Poe would have never unleashed this atrocity upon the viewer.

We begin with a young woman driving through the countryside. There is a handy volume of Poe’s stories next to her. The woman stops at a creepy cemetery, then goes into a building and follows a trail of blood up to an altar where she finds a bloody, beating heart. Boom. Boom. Get it? “The Tell-Tale Heart” made tangible. Bam! Cut! She was just imagining that bit after reading too many Poe stories.  WE CAN HAS A LITERARY CONNECTION. Unfortunately, this is the last of that connection you’ll ever see. Wave goodbye to Poe on his way out!

The woman is heading to a costume party. Now, though the photography was crap, up until this point (about five minutes into the movie) I thought we might have something. Sure, ‘spunky reporter on her way to masquerade ball’ sounds a bit cliche, but hey, they can do something with that, I thought. I was soooo wrong and my expectations were shattered around the six-minute mark when Spunky Reporter appeared in her costume for the ball and it turned out to be a crappy-looking, dollar-bin Cupid outfit. I know the actress was probably contractually obligated to show her legs, but really? The whole thing was off-putting, unsexy, and just ack.

Spunky Reporter sneaks into the party (She didn’t have an invitation) and it’s like the producers wanted to do that scene in Eyes Wide Shut where Tom Cruise goes into some bizarre bachanal, only, on a ten-dollar budget. First of all, the “mansion” of the movie looks so cheap that you can’t believe this is some huge gathering of super-rich people. Then the super-rich people are all dressed in dollar-bin outfits. Then, when you thought it couldn’t get any worse, a pop group with the lead singer wearing star-shaped glasses begins to play. MUSICAL INTERLUDE PERFECT FOR EYE-GOUGING.

Then Frank Stallone appeared playing a nobleman and I just gave up and grabbed the bag of Cheese Puffs to make this more tolerable. Why, oh, why did my husband have to buy the demonic Cheese Puffs the weekend when I decided to watch this? I think I ate so many that I was slightly intoxicated to the point where I was starting to become amused by the awful acting.

Oh, where was I? The plot. Well, there’s isn’t any. Sure, a masked person in a red costume kills people and there is some bizarre subplot about a nurse and a sick dude, and then random shit happens. How random? A woman is strangled, but despite the marks on her neck, people insist she fell down the stairs. People keep getting killed, but nobody leaves the frakking party. There’s a killer pendulum. Hmmm. That last bit was decent.

I can only imagine what a lazy student, trying to turn in an essay about Poe and watching the movie adaptation as a shortcut, would have produced if he watched this little gem.

Bad adaptation? You bet. Great if you want to get some friends together to watch some trash, eat some trash and yell at the screen. DON’T DO THE EASTER EGG HUNT! THERE’S A MURDERER IN A ONE-DOLLAR CUSTOM BEHIND YOU!