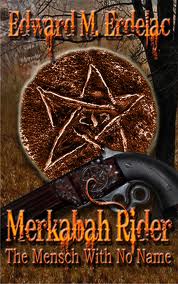 This second volume of the Merkabah Rider saga has a title that works as a pun on the recurring Clint Eastwood character in the Sergio Leone Spaghetti Westerns, just as the subtitle of the first volume was a play on the name of the first western that Eastwood ever directed. Indeed, now that I have read this collection, I am thinking that the Leone and Eastwood westerns of the 1960s and 1970s may well be major inspirations behind this set of tales. It shares several of the same elements: larger-than-life characters, cruel twists of fate, the righteous and innocent being savaged indiscriminately, and “heroes” and “villains” who are a lot more complicated than at first glance. But this volume has the Dollar trilogy beat in overall pessimism. As bad as things got for the Rider in the last volume, this story set more than ups the stakes.

The volume kicks off with Episode 5, “The Infernal Napoleon”, which has the Rider stuck in the “town” (a term that can only be used loosely) of Varruga Tanks. In the aftermath of his meeting with Lilith, he is now tormented night and day by her invisible, demonic children. Through means too disgusting to write about, they make his food and drink nearly indigestible and harrow his sleep through the astral plane. Only his heavy-duty collection of amulets and wards have kept him from being torn apart or driven mad. But one group of Lilith’s brood decides to take a more direct approach, placing the town and everybody in it under siege with the help of a hell-forged cannon that can always hit its target. This time, the Rider gets some unexpected help in the form of Gersh, a traveling, teenage strongman who, by virtue of his Jewish heritage (heritage he lost contact with upon being abducted by a Native American tribe), has inadvertently assumed the mantle of Samson. The Rider’s bonding with Gersh is one of the more touching parts about this segment and, like so many other delicate things in this story cycle, it has a crushing conclusion. Reading this reminds me of a quote from George Clemenceau: “War is a series of catastrophes that results in a victory.”

Episode 6, “The Damned Dingus”, leads the reader to believe that the Rider’s fate may eventually tie into the infamous Gunfight at the O.K. Corral and its equally bloody follow up. On a train to Las Vegas (which, some eight decades before the Bugsy Siegel makeover, is very much a gambling mecca), the Rider runs into John “Doc” Holliday and is robbed of his Volcanic pistol by a pack of train robbers. Just before this harsh turn of events, he is busy reviewing a supposedly ancient text, The Wisdom and Sacred Magic of Zylac The Mage (retrieved in the aftermath of the siege of Varruga Tanks), and dismissing it with an arrogance that brings to mind the Philistines of the Bible. After all, he’d been taught everything there was to know about the universe by his teachers, and there were plenty of mystic pretenders and charlatans running around during this period. Then, in the course of getting the Volcanic back, the Rider runs into an invisible creature that challenges every assumption he ever made about how things are.

Sadly, for the Rider, that is just the opening jab in the knockout punch of his faith in Episode 7, “The Outlaw Gods”. A tribe of Apaches finds the Rider in the middle of nowhere and takes him to a Hindu mystic (no, seriously). The interaction between the Hindu and the Rider is fascinating, with the suggestion that the teachings of the Rider’s order are hardly mutually exclusive. The Rider has been recruited for the purpose of dealing with the Black Goat Man, avatar and enforcer of the will of Shub-Niggurath. The rich history of the Spanish conquistadors is touched upon in this monster’s backstory (brilliantly exposited via an astral plane encounter), reminding the reader that the term ‘Old West’ goes back much further than the American Civil War. Anybody who has been waiting for the Elder Gods to make their presence known since the first episode (like me) will be glad to finally see this chapter. Without spoiling too much, it is worth saying that this is a sentiment that the Rider does not share at the end of the struggle.

The final episode of this collection, “The Pandemonium Ride”, is positively sadistic to both the reader and the Rider. Now the Rider is at his lowest ebb, barely hanging onto his life in Escopeta, a town in name only that’s full of desperadoes and bounty hunters. Once again, he is found by an exotic ally, ‘Kabede’ by name. Kabede is a member of a hidden enclave of the Rider’s order in Ethiopia, blessed at birth with the holy knowledge of all creation. To answer the question of what the Rider’s old teacher, Adon, is planning with the Hour of Incursion, and possibly call off Lilith’s children, Kabede proposes going to the one being in the universe who would both know and talk: Lucifer. Unfortunately for them, while they make this little side trip into Hell (literally), Adon’s new students pay Escopeta a visit, with consequences that are as ugly as they are inconclusive. I both loved this chapter and wanted to scream at it for a couple of days after I was done. The take on Lucifer is particularly balanced, a cynical jailer of human souls, who nevertheless recognizes his place in the order of the universe. This devil has no need to lie; the truths he tells these holy pilgrims are terrible enough. But ending things on a double cliffhanger? Gawd…I want to reach for the next volume, but, as of this writing, it is yet to be available (though I have been assured by Mr. Erdelac that the final set of stories is coming later this year).

The extraordinary characterization and culture clash are back here with gusto. The Yiddishcentric cosmic view I had complained about in the last volume is more-than-rectified here. The main trunk of the tree is still Yiddish tradition, but the branches of it manage to incorporate the Great Old Ones into the woodwork. It has the added bonus of showing faith of any kind as a constant struggle to keep up with the real world, rather than an issue that can be settled forever and ever. Modern-day Christianity could learn something from this lesson. In addition, the gradually increasing price of the Rider’s quest is brought painfully home. This also closely follows the Lovecraftian model of mystical insight: the more you learn about how the universe works, the more it costs you. The Rider’s journey adds the twist that he started off his journey THINKING he knew everything. But the revelations take as hideous a toll on him as they do on any of the scientific rationalists of the coming century (Lucifer’s punishment for these souls is particularly unsettling).

In summary, dear readers, as soon as Mr. Erdelac delivers the final volume of this saga, I will deliver it. Anyone who finishes this volume has come too far to go back now.

You can buy Mensch With No Name at Amazon.com.