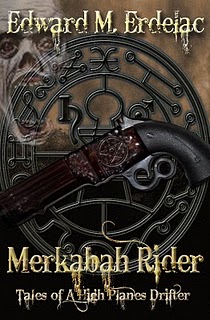 The Western is a genre that refuses to die. Every time critics declare it dead, some new movie comes along to let everyone know it still has a few more years of life in it. How else does one explain the success of the film remake of True Grit during this new century? The Weird Western, on the other hand, is something that has yet to really catch on. The subgenre has been around at least as long as the pulps, ranging from simple ghost investigations to exercises in flat-out horror such as Robert E. Howard’s “Pigeons From Hell”. Joe R. Lansdale can be considered the modern godfather of this particular subgenre with his novel Dead In the West and comic miniseries involving DC Comics’ Jonah Hex and the Lone Ranger. One of the more interesting developments that has come out of the Weird West is its willingness to deal with subjects that the old westerns refused to look in the eye. The original Kung Fu series (an unacknowledged forerunner of the Weird West) had several episodes that dealt with this angle as well as mystical elements. I am fairly confident that this approach informed more than a little of Edward Erdelac’s Merkabah Rider.

Okay, let’s answer the obvious question first. A merkabah is a flaming chariot of the Lord revealed to Ezekiel in the Bible. Therefore, to be a merkabah rider is to walk the realms of Heaven and Hell as a result of intense study of Kabbalistic and Solomonic texts. This particular rider is currently traveling the American West circa 1879. He was once the most gifted student of the Sons of the Essenes, a worldwide order of Jewish mystics who trace their lineage back to an ancient Hebrew monastic sect (much as certain occult groups erroneously trace their lineage back to the Knights Templar). But when he went off to fight in the Civil War on the Union side, his teacher, Adon, betrayed their order for power. Adon destroyed their American enclave and his one-time student has been hunting him ever since. He uses no name other than “Rider” as a form of mystical protection. He can walk the astral plane (which is referred to as the ‘Yenne Velt’ or ‘Other World’ in Yiddish) which is handy when it comes to dealing with certain situations. His clothes are covered with a wide array of mystical amulets and he rides a shining white onager, which seems to survive the worst the trail has to throw at him. His sidearm of choice is a pistol called a ‘Volcanic’. It can shoot bullets into humans, but also has the additional benefit of being able to wound and kill demons. The Rider has been searching for nearly fifteen years with no success…but he may be closer than he has ever been.

The book is structured a bit like a television series (which again makes me think of Kung Fu), divided into four standalone stories. The first, “Blood Libel”, leaps straight into the ugly prejudice that Jews suffered through this period. In the town of Delirium Tremens, the Gentiles are preparing to march on the nearby Jewish enclave of Little Jerusalem for the disappearance of their children. The real cause of the children’s vanishing is the ancient fallen angel, Molech, worshiped as a bull god in ancient Canaan. Lest you think that you may have read this story before, no one comes off as particularly virtuous. There are not one but two lynch mobs, the one about to storm New Jerusalem and the other lynching the Rider on the suspicion that he is a hired gun come to punish them somehow (Logic and lynch mobs mix like oil and water). The leader of New Jerusalem, reputed to be one of 32 tzadik nistarim (the secret kings of the world who keep God from destroying the world), proves to be a frightened, ordinary man dealing with events beyond his control.

The second story, “Dust Devils”, sends the Rider into the border town of Polvo Arrido via a dust storm that never seems to go away…ever. A bandito gang holds sway over the town on the surface, but the source of the storm can be traced back to a Haitian houngan who is letting a lifetime of slavery and hatred lash out at every one around him. I am a little disappointed by the way Vodon is treated in this context (the houngan‘s patron turns out to be just another disguised entity that fits the Rider’s religious worldview…more on that later), but the unpleasant emotional truths behind the houngan‘s story made me overlook that problem.

The third story, “Hell’s Hired Gun”, has the Rider coming upon a massacred Franciscan mission in the middle of the desert…where snow is falling. At his lowest ebb, he is found by a Christian preacher blessed (or cursed) with mystic powers of healing in the decimated border town of Gadara. The preacher tells the Rider the source of the massacre, an ex-Confederate soldier named ‘Medgar Tooms’ who rides at the head of a train of swine (Anybody who knows their Bible can probably guess at the nature of the demons possessing him). The resulting confrontation is a multi-sided tragedy where there are no winners, just survivors.

The final piece, “The Nightjar Women”, puts the Rider in the town of Tip Top, a town that has a thriving prostitution house. Attached to one of the local saloons are two people who will figure into the later Tombstone saga, John Behan (later, Cochise County Sheriff) and a prostitute called ‘Sadie’ (whose real name is ‘Josephine Marcus’, who would become the second wife of Wyatt Earp). But this house does more than just take money from their patrons. The copulations are a breeding program for demons by the thousands…and that’s the good news. The really bad news is that the force behind the breeding program, none other than Adam’s first wife, Lilith, knows the Rider’s REAL name.

While each incident seems unconnected to the others, the Rider begins to put together a nasty pattern that will figure into the next two volumes. One upcoming event is referred to over and over again: “the Hour of Incursion”. Further, Molech lets it slip that the Elder Gods are the driving force behind it. Somehow, Adon is a major part of the coming event.

There are two elements of Merkabah Rider that make it stand out. One, the clash of cultures highlighted throughout. Too much of what we have come to accept of the history of the old American West has come from white-washed Hollywood films and their pulp predecessors. The biggest mistake these fictions make is that everything is just as homogenized as we like to pretend our society today is. Erdelac reminds us that this landscape has many competing cultures knocking heads, with little to no arbitration to keep the bloodshed down. He shows that the main source of the strife is when all the ugly prejudices that these immigrant cultures came up with in the Old World follow them out west.

Two, there are no happy endings at the close of most of these tales. Westerns have been selling happy endings like hot cakes for well over a century now, but a few of the best ones (Unforgiven, the comic miniseries Saint of Killers) leave troubling endings that echo in the brain long after the story is over. By the volume’s conclusion, the Rider has lost more than he has gained and too many of his opponents prove to be more sympathetic than they would seem at first glance.

My real quibble with this volume is the unspoken assertion that the Hassidic mystical view of the world is proven to be the correct one. That this consistently happens in each one of the stories strains my suspension of disbelief nearly to the breaking point. I am always suspicious of human beings ever getting it completely right on anything mystical. Get it close, sure. But get it exactly right? The universe is, in my experience, a more mysterious place than any one system human beings can ever conceive of. Still, the Rider’s unfamiliarity with the Elder Gods points to a possibility of that issue being addressed.

Mr. Erdelac has assured me that this is only the first of three volumes that fully document the Rider’s story. I therefore ask all true Cthulhuheads to stand by for more of their favourite interdimensional gods. There is much more to come.

You can purchase Merkabah Rider: Tales of A High Planes Drifter from Amazon.com.