Orrin Grey was the best-kept secret in the cemetery, until those Evileyed ghouls exhumed some of his choicest morsels, wrapped them 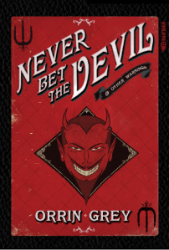 up in black-velvet winding sheets smoother than Telly Savalas’ moves, and stowed the bundle in a coffin fashioned from the salvaged timbers of an old circus car. While the hipper members of the Oubliette Society may mourn their favorite son’s return to the world above, those with sense as well as cobwebs in their skulls knew it was inevitable – you can only keep the spectral glow of talent underground for so long before it starts to seep out. And once there’s light in the graveyard, well, a man with a spade shop could turn one helluva profit, is all I’m saying.

The stories of Orrin Grey are fun, fast and – surprising enough in a genre where doom, gloom and ultra-gore are standard issue – rather good-natured. It’s not often you come across ‘pleasant horror,’ but that’s the best way to describe this collection: Put a load of classic horror movies and comic books in a blender, liberally add some splashes of Mike Mignola-cool, and you’ve got yourself a monster mash to be reckoned with. Grey isn’t afraid to wear his heart on his page and, when said heart is clearly so enamored with horror, it’s hard not to be charmed by his loving treatment of his favorite genre.

Now, that’s not to say there aren’t some very dark turns in the collection: “The Devil in the Box” and “The Barghest” should satisfy the grimmer tastes of horror fans. The latter of these has never before been published, which provides an extra treat for fans of Grey’s work. Even the completists who have closely followed his career will find new material here, as well as old favorites. Plus, “The Barghest” took its inspiration from an episode of Mystery Science Theater 3000, which makes for a great origin story.

Stories like “Nature vs. Nurture” and “Nearly Human” take more poignant approaches, with the latter story here again new to print. It’s a great haunted house yarn that will surprise even veteran horror hounds with its unique take on a classic set-up. Then there’s “The Reading Room,” which is downright romantic and again cleverly subverts the expectations we might have about grimoires.

Best of all, perhaps, Never Bet the Devil contains Grey’s long out-of-print “The Mysterious Flame,” a novella which sold out it in its initial run faster than a bat familiar bringing bad news to its undead master.

Add in amusing commentary by the author regarding the origin of each story, and great Bernie Gonzalez illustrations, and you’re talking one of the best collections to come out in recent – or ancient – memory. An assembly of fresh horror stories is always appreciated, but here, Grey does one better by laying out a line-up of tales that manage to exhume classic tropes and breathe new life into them. Rather fitting, given that the author is himself a re-animated skeleton.

Bio: Jesse Bullington is the author of the historical fantasy novels The Sad Tale of the Brothers Grossbart and The Enterprise of Death. His recently released third novel, The Folly of the World, is a medieval crime thriller laced with dark comedy, veined with Gothic weirdness, and spattered with raunch. His short fiction and articles have appeared in a wide variety of publications, and he can be found online at www.jessebullington.com, among other haunts.