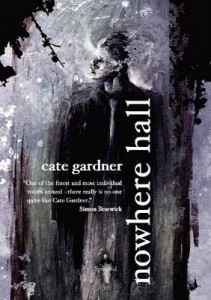 Answers are in short supply in Cate Gardner’s latest offering, Nowhere Hall, but the questions come in all flavours of weird. The eponymous hall, the Vestibule, is a sour patch, a ruined hotel where ghosts waltz through corridors of peeling wallpaper and worse things wait in the corners of a place that only barely clings to the frayed edges of reality.

Enter Ron No-Last-Name-Given, a man whose contemplation of death borders on the practical rather than the theoretical, and whose memories, hopes and fears find new life within the Vestibule when he is drawn inside to confront the malignant presence known as the “Umbrella Man”, for reasons unrevealed until the climax. While the identity of the Umbrella Man is never explicitly spelled out, it is obvious enough, though happily, this does not affect the story in any way, save to add inevitable weight of the climax.

Gardner’s trademark style is in full flower in Nowhere Hall, where lyrical and often-startling imagery is on display on every page. The story is simple enough, but the overflow of sensation and vibrant description elevates Nowhere Hall from a simple twist on the standard haunted house trope to something more malevolently sublime. Gardner’s style evokes the haze of a waking dream, sliding nonsensical images into the reader’s view with neither explanation nor justification. It serves to create a strong sense that anything can and just might happen.

A slim volume clocking in at only 25 pages, Nowhere Hall packs a book-length punch, nonetheless. The story begins in situ, in a miasma of suicidal thoughts and flickering images that serves to establish the disorientation of the protagonist, the simply-named ‘Ron’, and inflict a modicum of confusion on the reader. Who is Ron? Why is he, at this time, thinking these things? There are no answers, though there are hints aplenty as the novella progresses. While Ron’s viewpoint is the one the reader is hooked to, there is no guarantee that what the increasingly frightened man is seeing is anything other than a delusion born of depression.

After Ron has entered the Vestibule, the stage shrinks to pinpoint presentation and the larger world lies forgotten, as the path unspools ahead. The imagery shifts from the vibrant to the surreal, without changing gears, as Ron discovers that what he knows or what he thinks that he knows are not necessarily what is.

Within the setting of the Vestibule, Gardner creates a world which is, at once, both wide open and claustrophobically self-contained. Hints and teases of greater events intrude on Ron’s self-pitying spiral into the Umbrella Man’s clutches, and Gardner tantalizes the reader with a mythology that promises to explain everything about the Vestibule, its mysterious doorman, and the inhabitants that haunt its halls, if only Ron would…just…look…over…there.

Fortunately, Gardner is adept at pulling back the curtain just enough to give the audience a taste of the wonders on display without spoiling the show. Ron never looks, or, at least, never looks long enough or fast enough to see what follows him. But the implication of pursuit is enough for the reader. Something is happening within the Vestibule, but Ron – and, by association, the reader – is not privy to what that might be, or what it has to do with a young woman of his acquaintance.

As stated above, answers for the multitude of questions that spring forth from an initial reading of Nowhere Hall are in short supply. If anything, the climax – at once surprising, disheartening and yet, strangely hopeful – only adds a final link to the chain of confusion that entangles the reader. Questions are answered in Gardner’s work with subtle nods or slow winks, and glorious showmanship distracts from the absence of hard ground. Nonetheless, the story is solidly constructed and the pace is anything but slow. Despite the sheer amount of story that Gardner packs into Nowhere Hall, the story never feels as if it’s slow or dragging.

In part, this is due to Gardner’s world-building: Her world is one of slippery construction, changing from one thing to the next in the blink of an eye or the turn of a page, with a dream-like haze that lulls the reader down false corridors into nightmare conclusions. There is no safety to be had, whether in the halls of the Vestibule or out, and the only surety to be had is that the Umbrella Man always wins in the end, whether you escape him or not.

Nowhere Hall was a limited edition available from Spectral Press in 2011. While it is sadly now sold out, Cate Gardner’s other works, including an anthology of her collected short fiction, Strange Men in Pinstripe Suits & Other Curious Things, are available via her website.