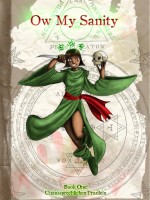 “Down they descended and created bodies, taking the semblance of women as their own.”

Thusly, the eldritch aficionado is tempted by the tagline for Adam Thaxton’s webcomic, Ow, My Sanity. Such a simple premise is executed with peculiarly polar opposites in subject matter. The spirit of an old-fashioned anime romantic comedy (my word, have they already become old-fashioned?), melds with the bizarre abominations of the Cthulhu Mythos.

With a title clearly paying tribute to the classic Harem Anime Oh! My Goddess, Thaxton replaces the cute goddesses, chibi princesses, and naughty space pirates that traditionally populate the genre, and instead offers his own incarnations of Lovecraftian entities.

Hapless, disturbed protagonist David Andrew Bartlett stumbles upon an occult ritual being performed in the bowels of his college dorm. While his dormmates, and fellow outcasts, are slaughtered by the creature they summon, this inhuman being taps into David’s desire, sparked by impending oblivion, and grants his wish for someone to “give a crap about him for once in his life.”

The amorphous, tentacled beast reshapes itself into the form of a dusky-skinned young woman of apparently Arab descent. In lieu of her unpronounceable moniker, David names her ‘Nancy Alhazred’ and learns that they are bound to each other until this powerful, inhuman being can comprehend what it means to care for someone.

While the story is only approaching its first anniversary, Thaxton has proven that his work stands well apart from the many constellations of webcomics that dot the starry skies we call the Internet. While Lovecraftian Horror and Harem Anime are two tropes that have been arguably run into the ground, this may well be the first meshing of the two – and what a horrifically successful experiment it has proven to be.

Thaxton’s art style sits uniquely on the long list of online comics I check daily. His not-wholly-black-and-white sketches bring to mind a hypothetical universe where H.P. Lovecraft was the artist and H.R. Giger was the writer.

The minimalist approach to colour – reserved for details and highlights on the truly eldritch elements that arise in the story – leaves readers with a true, artistic sense of the surreal, bleeding over into reality. Largely restricted to shades of red, green, and violet, the sparse colouring is used to emphasis the eerie nature of extradimensional influences being exerted on Earth.

Thaxton portrays the world around David as vague, shapeless, and unimportant. What sticks out with obscene clarity are the hints of supernatural influence the artist inserts into the corners and margins of his comics. Between panels, or framing a page, may be found interpretations of traditional, Lovecraftian imagery, such as gaping maws and leering, inhuman eyes. Besides being signs of Elder Things at work, these finely-detailed grotesques both contrast and complement the obscure backgrounds in the comic, highlighting how unimportant, yet still encroaching, human society remains.

The characters are another endearing element of this nascent comic. David himself is the sort of downtrodden dolt that is prerequisite for a Harem series. He is kept fresh with smarmy wit and a sharp elimination of that amiable obliviousness that renders many male anime protagonists useless.

The design for the female characters, who are of greater importance almost by the very definition of the genre, creates a memorable dichotomy. Nancy possesses the childlike naiveté of a total newcomer to the human world, yet never lets the reader (or David) forget the fact that she is a godlike entity that can massacre mortals like insects.

The Sleeper of N’Kai, aka the Frog Girl, with her appealing, amphibious design and charmingly-clingy personality, right away became a personal favourite of mine. However, I have also developed a fondness for David and Nancy’s new neighbour, and self-appointed big sister, Shub-Niggurath (“Call me Shubby”). These characters’ quaintly girl-next-door personalities, coupled with totally alien appearances, act to leave a welcome mark upon the audience’s mind.

Thaxton excels at revealing the softer sides of these non-human entities, and I do not mean their gelatinous, ichor-slick underbellies. There are moments when these otherworldly beings seem closer to humanity than the callous people around David.

Particularly with female protagonist Nancy, in both dialogue and carefully-drawn facial expressions, one can perceive the peculiar evolution of character. Even with the hints of her menacing, demonic forms in memory, the faint blush that occasionally appears on Nancy’s dark cheeks lends the character an appeal that fevered minds might call ‘cute’. Fortunately, I am possessed of a fevered mind.

There is nothing terribly original in the plot or character archetypes, but that is the doomed fate of many parody endeavours. However, Thaxton keeps things fresh with more than just twists on the genre, which only carry a work so far. While it is occasionally pushed aside to let the art speak for itself, the comic’s dialogue is clever and entertaining, lending staying power to the story and characters.

A conversation where the Black Goat of the Woods with a Thousand Young explains why she is a good source for relationship advice is too wonderfully absurd to miss.

Like many fans of Lovecraft, Thaxton leaves his work rife with references, allusions, and comedic quips on the inspirational material. While many puns deserve only a rolling of the eyes, at best, Thaxton infuses actual creativity into the satirical chapter titles for his comic.

Some artists think simply tossing about the name of ‘Cthulhu’ grants their work merit, but that is not the case here. Proving himself to be more than superficially Lovecraftian, Thaxton meaningfully incorporates contributions from other Mythos writers. Additions to the Mythos by Clarke Ashton Smith, for example, are integral to the comic’s storyline.

I heartily recommend this webcomic for all Mythos fans, save those with the biggest chips on their shoulders.

Casual fans of comics and anime may not take to this series as warmly. Rather than embodying the insipid veins of manga and anime that inspired the genre, Ow, My Sanity instead twists and mutates their tropes with vicious delight.

The slapstick and perverted humour of most romantic comedy anime are eschewed, with good reason, in favour of fostering conversational humour, accompanied by atmosphere, tension, and plot.

Audiences possessing more mature appetites, with tastes for surreal art and dark humour, are apt to adore this story about boy-meets-monster(s).