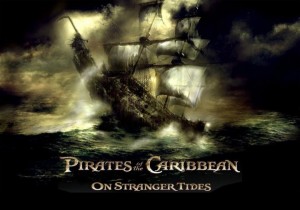 Full disclosure: Will the fourth installment in the Pirates of the Caribbean blockbuster series change your life? Probably not. Is it as “disappointing” as some critics are claiming it is? No, not really. Is it good, rollicking summer fun? Yep.

Jack Sparrow (Depp) is intent on his quest to find the Fountain of Youth (from the epilogue of previous installment, At World’s End), but takes a side trip to London to rescue henchman Gibbs (Kevin McNally) from the gallows and figure out who is recruiting seamen in his name. The first and third missions coincide when he hooks up with old flame Angelica Malon (Cruz) and gets shanghaied onto the ship of her long-lost daddy, Blackbeard himself (McShane). Meanwhile, Barbossa (Rush) has lost a leg and gained a privateer’s commission from sleazy old King George. Soon, it’s a three-way race (The Spanish are also on the Fountain’s track) to the coasts of the Carolinas and then Florida. Who will get there first, who will get eaten by mermaids, and who will drink from the Fountain?

According to the end credits, and this interview, the story was “suggested” by Tim Powers’ novel of the same name. Having not read that particular novel of his, I can’t say for sure how closely this one hews to his storyline, but if he’s responsible for any of the good stuff in the film, by all means, give him a credit. I’m sure he can use the money. Having someone else’s plot as a basis sure helped the screenwriters this time round in keeping the story reasonably tight. While Dead Man’s Chest filled its plotholes with lots of empty, pointless action sequences and At World’s End wandered all over the place, turning most of its characters into one-dimensional walk-ons, On Stranger Tides keeps a steady course and efficiently uses the characters in its playbook.

We even have time for a weird romance between two of Blackbeard’s captives, fervent young man of the cloth, Gillette (Damian O’Hare), and a mermaid (Astrid Berges-Frisbey). Though Gillette is there essentially to wave a Bible around and yell about morality in the first half, and run shirtless through the jungle in the second half, O’Hare gives a surprising amount of depth to the character. Not that I minded the beefcake in the least (Hey, O’Hare is fetching and it is a summer action flick), but O’Hare’s enthusiastically good acting was a nice addition to what could have been an embarrassing subplot. Berges-Frisbey is also good, but doesn’t have much to do aside from getting tied up a lot.

Less successful is the romance between Sparrow and Malon, mainly for a lack of time devoted to it (An even bigger misstep is the inexplicable fanaticism of the Spanish in the climax, which has no build-up in the story whatsoever). I’ve heard complaints that Depp phoned it in, but it was more that all the role required of him this time was to run around, dodge pointy objects and do other action-y things. And he did do those things well. Cruz, similarly, doesn’t get much to chew on, but at least Malon’s given a saving grace in a redemption arc involving her daddy. I’d say that McShane was reprising his Al Swearengen role from Deadwood, except that, while I thought he looked really familiar, I didn’t recognize him until someone pointed out his name to me in the end credits. Either way, he’s quite effective as Blackbeard (even if the portrayal of Blackbeard and his leadership is seriously a-historical) and you know where that character is headed long before the end.

Geoffrey Rush chews as much scenery as he can possibly reach, but his finest moment is Barbossa’s story of how he lost his leg (and the Black Pearl, which spends the film in a bottle). The director wisely lets Rush tell the story with no flashbacks and only a few sound effects. This simplicity makes the story all the more chilling.

Speaking of ‘chilling’, I was thinking this film had almost no Lovecraftian elements compared to previous films – until we got to the mermaids. Their scenes might be too much for younger members of the audience, except that the underlying horror of their subplot is probably subtle enough to go over the heads of little kids. That said, the sequence that introduces the mermaids (and what they can do) is a great exercise in establishing a mood of foreboding and then paying off on it. They’re scary. As in, Doctor Who‘s “Blink” angels kind of scary. Add onto this Gillette’s eventual fate and you’ve got a lot of the Innsmouth Look vibe.

Now, I bet you’re thinking, Well, what about Elizabeth and Will? And what’s this about the Black Pearl? Will and Elizabeth had their place in the first film, but I thought their whiny, uptight shtick quickly got old in the next two films, and their willingness to resort to as many underhanded tactics as the pirates just made them look like self-righteous hypocrites. I did not miss them in the least. I came for a rollicking bit of pirate fun, with pirate characters of varying amounts of “dirty” doublecrossing each other while crossing swords and flintlocks. And this time, that’s exactly what I got. As for the Black Pearl‘s fate…I was surprised that I didn’t really miss the ship, either (though the scene where we see it in the bottle is pretty creepy, even if the CGI is a bit dodgy).

I thought this film did a good job of evoking its various historical settings. Previous Pirates films (even the first one) seemed to be set in a fantasy verse that looked more like a Disneyworld exhibit than anything in the real world. But, from the opening chase through early-18th-century London streets (including an amusing cameo involving Judy Dench) to the Fountain’s grotto, On Stranger Tides gives us some reasonably accurate images of how the Carolina and Florida coasts looked three centuries ago. Which is pretty good, considering that of those three places, they only filmed in London.

Finally, I didn’t see this in 3D (Nobody at the ticket counter asked us which we wanted, despite the theatre advertising both, 2D was half of what 3D would have cost, and I wasn’t paying, so….). However, I didn’t see much in the film that would have looked better in 3D. Most of the action was the usual left-to-right across the screen rather than in-and-out, the latter being what you’d see in a properly-done 3D film. There was also little room for depth in the settings (which were usually crowded with single layers of objects) and a fair bit of the film was darker than would make 3D a fun experience. I’m not saying you shouldn’t try it out in 3D if you get the chance, but I doubt you’d miss much watching it in 2D, either.

Pirates of the Caribbean: On Stranger Tides is out now in theatres in 2D and 3D.