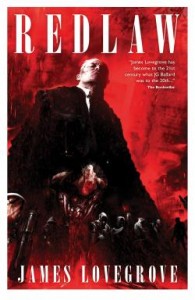 The protagonist of this new novel by British author James Lovegrove – I won’t call him a ‘hero’ – is John Redlaw, a high-ranking SHADE (Sunless Housing and Disclosure Executive) officer. His job is to control and protect the Sunless, AKA vampires, when they foolishly or unwisely leave the protection of the ghetto-like enclosures where they are housed. This is usually accomplished by killing them with his Cindermaker, ash-wood bullets and Holy water grenades.

The book seems to be set in an alternate near-past dystopian reality. The EU hasn’t happened. Waves of immigrant vampires – the deadly undead from Hungary, Bulgaria, Romania, and Albania, but no Polish plumbers – have been invading the UK. They are the literary equivalent to the waves of immigrants that flooded into Great Britain after the Eastern European block countries were admitted into the European Community. In the book. the Brits, as ever, are complaining vociferously about the incomers’ arrival, presence and drain on public funds.

It would be difficult, these days, to write about a semi-modern vampire scenario without making some reference to the other looming modern vampire epics, like the Twilight saga or True Blood. I’m not a teenybopper, so I’ll confine my comments to True Blood. In the popular novel and TV series, the vampires of Belle Fleur, Louisiana have achieved the status of landed gentry or, at least, comfortable middle class. Sometimes, I wonder if a large part of the resentment of them by the Belle-Fleurians isn’t envy and jealousy of the florid lifestyle they enjoy.

In Redlaw, the tables have been turned in an ugly and depressing way. The floods of vampires escaping from a crumbling Europe are confined in semi-derelict housing blocks. In James Lovegrove’s new novel, vampires, the Sunless, are the scum of the earth – to be feared, hated and herded into concentration-camp-like housing. Here is my first problem with this book: I can’t understand why vampires would choose to give up the relative freedom of Central Europe’s woodlands and mountains to exist as little better than cattle, fed on the by-products of other cattle. It requires a giant wodge of ‘suspension of disbelief’ to buy the central premise that this book is built on.

The lead character, John Redlaw, is formulaic. An aging, alienated former cop, although now the ‘golden boy’ of The Night Brigade, he is also a devout-but-troubled Christian – a kind of Bible-belching Jack Reacher. Humourless, he neither drinks, smiles nor consorts with women or men. Devoid of any other concerns or outlets, his only interest is killing vampires.

As the book begins, Redlaw, still grieving for his partner, Róisin Leary, who was killed in an ambush by escaped Sunless, is trying to contain a riot of Sunless in their enclosure in Hackney, North London. These outbreaks of violence, which occur during the delivery of fresh cattle blood, are becoming more frequent and uncontrollable. Then Redlaw gets into a fistfight back in Headquarters with a colleague: Ibrahim Khalid, a Central Casting image of a Muslim. Brutal, rigidly adhering to extreme fundamentalist interpretations of the Qur’an, the unofficial leader of the Islamic faction in SHADE, Khalid resents taking orders from a woman and hates Redlaw. He is reprimanded by Commodore Gail MacArthur ex the Royal Highland Fusiliers. One of Redlaw’s staunchest supporters, she then orders him into her office for a dressing down.

Fortunately for the plot, Redlaw does have one good friend,  Father Graham Dixon, Vicar of St Erasmus Church of England in Ladbroke Grove. His visits to the good vicar provide the setting for several of the philosophising interludes.

More interesting and important to the story is Illryia Strakosha, a shtriga – a vampiric witch that, in Balkan mythology, has special powers, which include not needing to feed so much on blood. Originally from Albania, she was turned during the early years of Enver Hoxa’s brutal reign and roamed around Europe for many years before coming to England. For me, she is far and away the most interesting and appealing character in the book.

Chief among the villains is Giles Slocock (a presumably apposite name) an opposition (Tory) MP. The Shadow Secretary of State for Sunless Affairs, he is openly addicted to cocaine and high-class prostitutes, and is a master of muay thai, a particularly brutal style of kickboxing.

Then there is Nathaniel Lambourne, an arrogant, greedy, billionaire industrialist (Every book of this sort has to have one), CEO of Dependable Chemicals PLC (Dep Chem), parent company of BovPlas, the supplier of cattle blood to most of the Sunless enclosures and creator and promoter of Solarville – the ultimate solution to housing the Sunless.

It all goes downhill from there. To say more would give away the plot, but, in my opinion, it all ends badly. The most frustrating aspect of this it that Mr Lovegrove can write gripping and believable action scenes. However, too often, just when the action gets going, we get the philosophical equivalent of a commercial break. These too-frequent diversions for theological philosophising are disruptive and irritating.

The book as a whole is violent and brutal, with a pronounced stench of misogyny and anti-Muslim bias. A throwback to books of the 1950s and 60s, it projects a level of racism and intolerance that I believed to be unacceptable these days. For me, reading this was an offensive and deeply unpleasant experience. If I had to describe this book in one word, that would be: ‘cynical’.