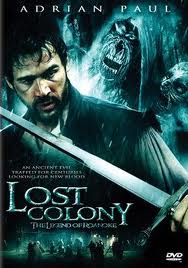 What can you expect from a SyFy Channel movie, from the makers of giant octopus and shark flicks? Not much. But I’m an optimist and the idea of using Roanoke, that early American settlement from which everyone vanished several centuries ago, does have potential. As I’ve said before, mysterious vanishings are always a great source of inspiration because they tackle our deepest fear: the unknown.

This flick, however, does not produce fear as much as a few snorts and unintended giggles, and even then, it’s not hammy enough to be a B-movie, late-night romp because it all feels so dull. It stars the dude from Highlander, Adrian Paul, as one of the colonists who arrives in Roanoke. Something is amiss there and it’s not hard to figure out what it is, both because the other title for this flick is Wraiths of Roanoke, and because we see the wraiths in the very first few minutes.

This is the type of intelligence found in this flick: at the beginning, a man kills himself, but before his demise, he has time to leave a message scrawled in ancient Icelandic on a wall. Adrian Paul happens to know ancient Icelandic and reads it. One wonders how many Icelandic scholars are wandering around Colonial America. But hey, it’s a plot device. I’ll buy it. No. The real stupidity lies in the fact that Adrian Paul is an expert on Icelandic culture and legends, but he doesn’t remember this until later in the film. Bits of knowledge suddenly pop into his head. Imagine if Van Helsing didn’t conveniently recall vampires are allergic to garlic until the end of Dracula, and you get an idea of the wackiness this creates. They might as well have made Adrian Paul completely unaware of Icelandic lore if he was going to act stupid and not remember important bits when the script demanded it.

To top it off, our “hero” is one of the most inefficient heroes in the history of horror movies. The settlers might as well kill themselves now, because Adrian Paul spends the movie complaining about how he can’t defend his people and then fails to defend them in an act of self-defeating prophecy that grows tired. Not every hero should be He Man, but come on. This dude ain’t even trying and his whining gets grating. Plus, even though Paul became famous for his role on a show about sword-fighting immortals, he doesn’t do any interesting sword-fighting. You’d think he’d know how to. He does, however, look suitably depressed and pitiable throughout the movie. Then again, pity and depression can only take a role so far. The scriptwriter really needed to think this one through.

As for the blood and monsters, the wraiths glow like Obi Wan Kenobi’s ghost and they do kill people, but it’s nothing special. My husband also complained that Adrian Paul’s wife was annoying and deserved to be killed first.

Killer trees borrowed from Evil Dead, a half-assed pseudo-Icelandic mythology, camera work that doesn’t even try to be ominous, boring developments that make material suitable for a half-hour anthology TV show feel like it’s three hours long. That’s Lost Colony. Which explains why it was lost.

Lost Colony is available from Amazon.com