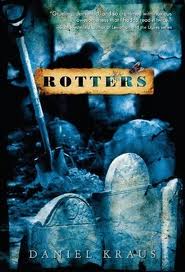 Rotters, Daniel Kraus’ second YA Horror novel, opens with the death of Joey’s mother. In the next few chapters, everything else Joey thought he could rely on falls away and he finds himself in the small town of Bloughton, with nothing but his clothes and trumpet, waiting to meet the father he’s never known. Adjusting to small town life is difficult. Joey is abused at school, ignored at home and all around miserable. As mistreatments multiply, Joey resolves to find out the reason for his father’s callous recalcitrance. And that’s where things take a delicious turn towards the macabre. Joey’s father, you see, happens to be a Digger – or, in outsider terms, a grave robber.

In Rotters, those that have power get it through going beyond the surface of life, through the messy layers of emotions, and into the easy and empirical core. Joey’s biology teacher, a Mr. Gottschalk, exemplifies this, lording his strength over Joey by examining Joey’s form in the most materialistic and reductionist senses. In grave robbing, Joey can get that power himself. Underneath the earth, away from the constraints and mockery of society, there are solitude and bliss to be found amongst the dead. As Joey’s father tells him:

“There’s no pain down there. You remember that woman. You sat next to her. You touched her. Her life was pain, too, but down there all that was gone. Remember? […] There are things down there you wouldn’t expect, kid. Solace. A little bit of power. There’s so much to be had down there, and everyone,” he said, waving a hand at the sky, “Everyone is reaching up, up.” His caressing fingers became a fist that pounded once upon the dirt. “They’re reaching in the wrong direction.” (p. 135)

What makes Kraus’s depiction of grave robbing so fascinating is that he manages to keep his characters likable, but does not trivialize the crime or come up with overdrawn justifications. What the Diggers do is, in its way, grand and their actions are, to some extent, legendary, but the grotesque remnants that wait in each grave are more than enough to suffocate the profession’s romance. The digs themselves are described in a vivid and precise manner, the shoveling of dirt an activity so fraught with catharsis and tension that readers are likely to feel their arms and souls growing tired just reading about it.

Unfortunately, Bloughton’s high school is bland and uninteresting when compared to the fantastically depicted secret society of Diggers. All the requisite players for a high school drama are present, and the few things that distinguish them are left outside the school gates. There is the hulking, popular and cruel bully, beloved by the administration. There is the aforementioned bully’s beautiful and aloof girlfriend. There are the crowds of sycophants who gladly despise Joey at the orders of their schoolyard overlord. There is the one true friend, the two of them exiles in a cruel, teenaged world. And so forth. None of this is badly done, mind you. Kraus is a skilled author and he draws the reader into Joey’s plight. But while the sections aren’t bad, they certainly aren’t particularly good and school always feels more like a distraction from the plot than a valid story in its own right.

Things grow more interesting again when the nighttime aspects of Joey’s life come to dominate, when Joey loses all ability to keep the two halves of his life apart. Joey changes drastically over the course of the book, but his evolution is always believable and he never loses the reader’s support. The final hundred pages of Rotters are an excellent mix of tension, escalation and well-depicted character moments. The beginning of the ending is slightly marred by the rushed depiction of a much-foreshadowed scene, but such things are quickly forgotten in the rush of what follows.

A large part of the success of Rotters comes from Joey’s voice. Joey is a teenager and sounds like a teenager, but the effect is never overdone. Kraus proves himself capable of depicting a character who is vulnerable but sympathetic, ostracized but understandable. As it does for most teenagers, the world (or, at least, the story) revolves closely around Joey, and many descriptions are more informative for what they reveal about Joey than for what they show of the described. Joey’s father, for instance, is not a vivid image because of any particularly stark physical details, but rather because his looks and lifestyle are a possible future for Joey. Even the natural world comes to reflect our protagonist. After a long wait, Joey does not say that he’s lost track of time, but rather that “time lost track of me.” (p. 27)

Joey’s an obsessive narrator, and Kraus uses that to overlay the book’s themes and darken even the most innocent scene. In the prologue, Joey wakes up one morning and knows that his mother will die. The entire chapter, from that point, is his endless circling of that issue, his attention paid to every possible means of demise, his inability to concentrate on anything else for even a moment. Repetition is a technique that Kraus uses again and again later, combining classroom scenes and memories of nighttime digs, tension and strife with memories of trumpet lessons.

Rotters is an interesting and daring book, a novel that manages to take an activity that is so far outside our perceptions that we can regard it as nothing but detestable and practically inhuman, and make it not only acceptable, but, at its peaks, glorious. Joey is an easy character to be drawn to and Rotters is the kind of book that, once it’s got its talons in you, won’t let go until it’s dragged you through more recently dug-up earth than you could have ever dreamed of. And you’ll love every shovelful.

You can find Rotters on Amazon.com.