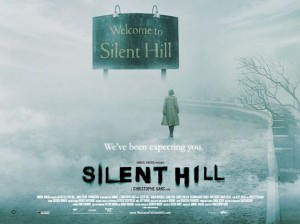 Rose (Radha Mitchell) loses her adopted daughter Sharon (Jodelle Ferland) in the mysterious, fog-bound ghost town of Silent Hill. Before she can go looking for her, though, she’s arrested by Cybill (Laurie Holden), a police officer, not long before they both discover the town is quite literally cut off from the rest of the world. Then they discover the town’s not deserted, after all. They encounter a cult, led by the sinister Christabella (Alice Krige), that may have done something terrible to Alessa, a ghostly little girl who looks just like Sharon.

I wanted to like this. It’s based on a famous videogame with Lovecraftian allusions (various versions of which we’ve reviewed here at IFP). Its original protagonist, Harry Mason, sounds like an awesome unreliable narrator. The film version attempts to give us a tale as gratuitously loaded with varied female characters as too many horror films are loaded with men for no good reason. And the climax of the story, once Rose finally gets down to the basement, is pretty good. Sadly, that doesn’t prevent the film from being very, very dull.

So, where does it fail? Well, first, there’s the imagery…which is monochrome and lacking (and often so dark I couldn’t see what was going on). If the story used its obscurities to better effect, that lack of colour wouldn’t be a problem. I’m happy to see creepy fog and an abandoned ghost town, but the props and scenery are just plain dull. It doesn’t help that the concrete presence of the loopy cult dispels much of the mystery of the town, while adding little more than random menace. It’s tough to be scared of a ghost town called “Silent Hill” when it’s anything-but-silent. Or ghostly. Not to mention, where’s the hill? Things pop up, but they’re neither scary nor interesting, for the most part (One exception is the group of living mummies that blindly fight each other while stalking Rose in the basement).

Second are the characters, who remain one-dimensional in their actions and background. Mitchell does her best, but Rose is no Harry Mason. Mason comes off in the games as an initially-solid Everyman who very slowly unravels a mystery (or just unravels himself) that is complicated by his own unreliable POV and isolation – a classic Lovecraftian protagonist. Rose is your stereotypical Protective Mother type who is treated as crazy at first (’cause all women are, like, irrational and hysterical), even though what she sees is all distressingly real and witnessed by multiple characters. She doesn’t actually spend much time by herself. Not much Lovecraft there.

Cybill initially is your Dumb Officious Broad that most film policewomen are, who later turns good and then suffers a horrible fate (because God forbid we have two women walking off together into the sunset, parenting a little girl). Christabella rants and raves and mainly serves to demonstrate the evils of female authority. For a film with such a large (and, it must be said, strong) female cast, Silent Hill sure is afraid of female power. If it’s not Christabella’s fanaticism, it’s Alessa’s universally adolescent rage that’s wrecking everything. It therefore makes perfect sense that the men in the story, be it Rose’s husband Christopher (Sean Bean, who gets second billing for a cameo role) or Cybill’s obstructionist boss, Officer Gucci (Kim Coates), are pointless and ineffectual. I guess they’re supposed to mirror the one-dimensional girlfriends, wives and other female figures of your usual horror film, but they highlight more the inability of many male filmmakers to write strong females without first castrating or killing off the men – because the female characters can only remain strong in isolation.

The plot feels overly linear, betraying its videogame roots. Rose encounters a character, who does/infodumps Something Significant, or enters a Dungeon and finds an Important Object that leads her to Something Significant. The plot then moves forward; rinse, wash and repeat. Symbolism comes in two flavours – Obvious and Deliberately Vague – and never do the twain meet. There isn’t a whole lot of intentional subtext.

Most disappointing is the lack of Mythos. One could argue whether Silent Hill the videogame is, strictly speaking, Lovecraftian (There’s a good debate about that right here), but the film definitely isn’t. The game includes several elements beloved of Lovecraft (The Unreliable Narrator, the isolated New England setting that shifts and changes, the cult that may or may not exist). The film changes these to make them non-Mythos. I’ve already mentioned the gender change of the narrators, and the distressing reliability of what we see, but the setting has also been dramatically altered. In the videogame, Silent Hill is in New England and relies on the classic, poor-New-England-town double-hander of tourism and farming. Very Lovecraftian. In contrast, the filmmakers apparently wanted to recreate the real-life environmental tragedy of Centralia, Pennsylvania and set their Silent Hill in West Virginia. Not very Lovecraftian at all. There’s nothing wrong with this, per se, but the film seems stuck in the videogame too much to become its own, vibrant entity, while twisting its own gaming roots such that it gets no nourishment from the source material. It feels like a case of a film that couldn’t figure out its intended audience. Either way, that audience doesn’t include those looking for some good Mythos, veiled or otherwise.

You can buy Silent Hill on Amazon.com.