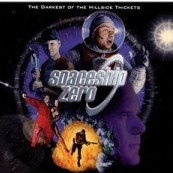 Spaceship Zero is a soundtrack album for the RPG game of the same name. Put out in 2001 by a Lovecraft/Mythos rock group operating out of Chiliwack, B.C. since 1992, The Darkest of the Hillside Thickets, the album is a bouncy tribute to ’50s and ’60s space-opera film and television. It doesn’t take itself even remotely seriously and comes across like Buck Rogers on crack. Tracks like the mostly-instrumental title theme, “Spaceship Zero”, and “Twenty Minutes of Oxygen” are unabashed space opera of the kind you’d find in early Robert Heinlein. The instrumental “Oblivion” could have come straight out of Logan’s Run and sounds a bit like Vangelis. Songs like “Power Up” have a more anime/superhero flavor by way of Power Rangers, while tunes like “Frogstar” and “Requiem for a Clone Hunter” spoof Star Wars and Flash Gordon. “The Math Song” is about math because “You got a brain/and nobody really needs another love song.”

Though the song titles indicate a rather less Lovecraft-influenced album than many of the group’s other 15 cassettes and CDs (like Cthulhu Strikes Back from 1995, or their latest, The Shadow Out of Tim from 2007), Spaceship Zero does still include tracks like the bouncy classic “The Innsmouth Look” (which has been doing the rounds on Twitter in the past week or so) and “Sounds of Tindalos”. “The Innsmouth Look” is about a guy who goes on a date-gone-bad on the beach with a girl from Innsmouth: “One glance is all it took/She gave me the Innsmouth Look.” Or it would be bad if the narrator weren’t already acquainted with “Father Dagon”. So, I guess that makes her the perfect date for him. “Sounds of Tindalos” (about the hounds of Tindalos, who can appear out of corners) appears to be from the viewpoint of creatures of the outer darkness dragging down a helpless victim to insanity, or maybe the staff of the psych hospital asking said victim what he’s seeing: “Struggle not/to be free/Tell us all/what you see.”

“The Chosen One” sounds like road music for the Winchester Brothers as they speed their way through a Mythos universe (It samples “The Innsmouth Look” at the beginning), though the album predates Supernatural by four years.

Spaceship Zero seems to exist in an odd place, genre-wise. I’ve seen it variously described as “blues” (it’s not), “rock”, “punk rock”, “horror punk”, “geek rock”, “powerpop” and “nerd rock”. You could argue for the last category, if you consider anything with lots of sound effects and scifi dialogue in it “nerd rock”, too. But this feels more like hard rock of the garage-band variety that sometimes (“The Innsmouth Look” with its pounding bass line) tips over into metal along the lines of bands like Stabbing Westward. If you like Metallica and don’t mind something somewhat quieter, this could be up your alley. If you’re into rock and Mythos, you need to check this band out.

Interested in purchasing this CD? You can listen to it here or you can buy Spaceship Zero from Amazon.com.